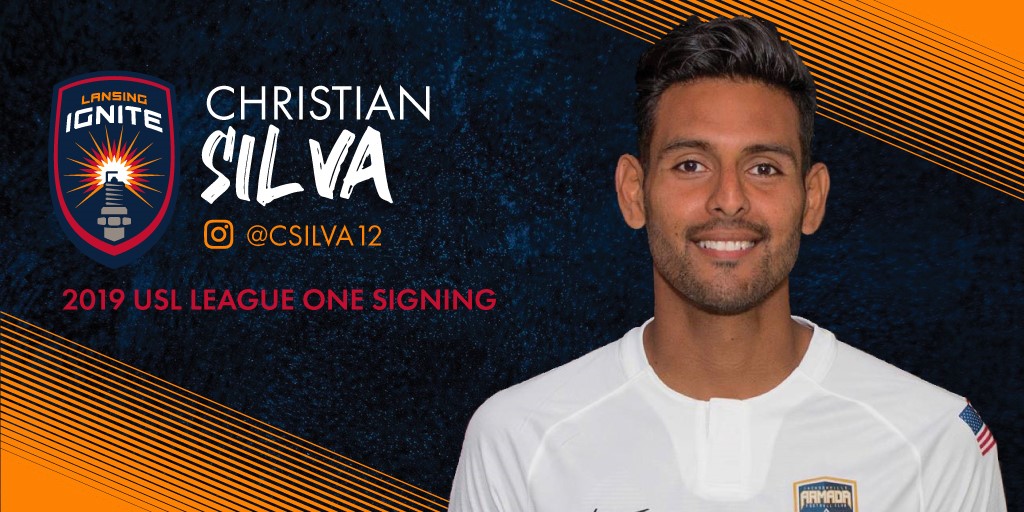 Having most recently played for Jacksonville Armada FC, Silva brings his experience to Lansing from the USL Championship and Sweden. The 29-year-old played college soccer at the University of Tampa and University of South Florida before appearing in USL League Two side Ocala Stampede and pro club VSI Tampa Bay FC. In 2014, Silva moved to the Swedish side Karlstad BK, where he notched two goals in 12 matches.

“I am honored to continue my career with Lansing Ignite,” said Christian Silva. “After speaking with Coach Nate and Jeremy, I knew right away that I had to become part of this organization as I was immediately drawn to the infectious passion and style of play that will come to define the Ignite. To be part of an organization from the very beginning is a massive honor and responsibility. I am beyond excited to grab with both hands. Counting down the days to get out in front of The Assembly Line and the city of Lansing and leave it all out on the field for them.”

In March 2015, Silva moved back to the states to play with the Rochester Rhinos, and in January of the following year. he moved to Orange County Blues FC (now Orange County SC) before being transferred to Arizona United.

“I’m really excited about Christian as his skill set and player profile fits our model of play perfectly,” said Head Coach Nate Miller. “He is a USL veteran that I believe can have a real positive impact on his teammates. His passion about the project here was obvious to me, and I’m excited to see what he accomplishes in Lansing. He is a great passer and has an excellent understanding of space and tactical awareness. His personality is also contagious and will bring a great energy to our club.”

Silva is the second player to sign with Lansing, following the announcement of Xavier Gomez. The team will begin practice in February 2019 with their first match date to be announced soon. Additional player signings will take place over the coming weeks with announcements to follow. For more information on Lansing Ignite, visit www.lansingignite.com or follow the team on social media.