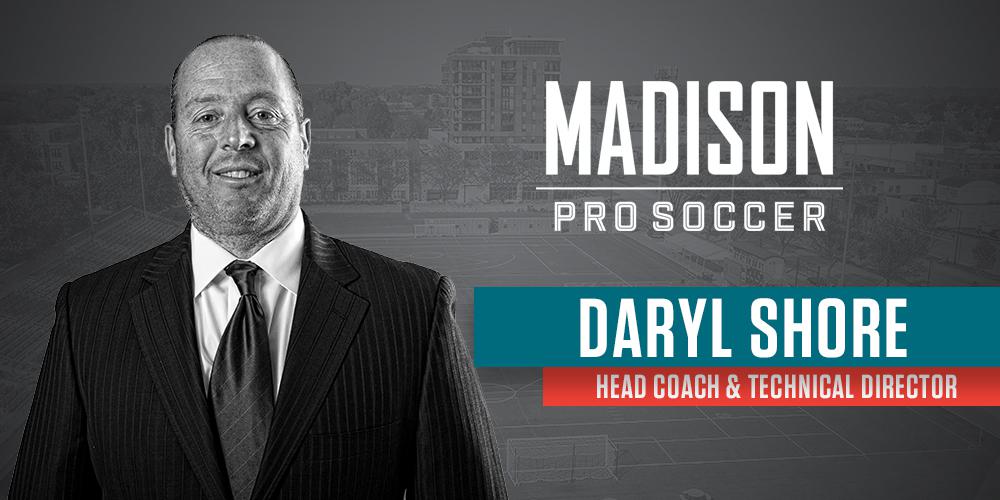 Veteran professional soccer coach Daryl Shore has been named the first Head Coach and Technical Director of Madison Pro Soccer. Peter Wilt, Managing Director of the USL League One franchise, made the announcement at a news conference at the Nomad World Pub in Madison.

Shore, 48, has 25 years of coaching experience that has taken him to three lower-division head coach positions over six seasons and 15 seasons as an assistant coach in Major League Soccer with the Chicago Fire and Real Salt Lake. He also served as Interim Head Coach of RSL in 2017.

"I am honored to have been chosen as the first Head Coach and Technical Director for Madison Pro Soccer," Shore said. "To be able to work with an outstanding ownership group and to be reunited with Peter as we build a team and a culture that the city of Madison will be proud of is an opportunity that couldn’t be passed on, and I am looking forward to getting started."

Shore-coached teams have qualified for the playoffs in 17 of his 23 professional seasons, including nine of his 10 seasons in Chicago. In Chicago, Shore and Wilt worked together, with Wilt serving as the MLS team’s President and General Manager. With the Fire, Shore earned three Lamar Hunt U.S. Open Cup championships, the 2003 MLS Supporters' Shield and was an MLS Cup finalist twice.

"Daryl is one of the most dedicated soccer coaches I know," Wilt said. "He's a winner and a good teacher of the game. He works hard, is a good talent evaluator and is networked very well throughout the sport. His network and his eye for talent will be critical to the team’s success in Daryl’s role as technical director in charge of recruiting our team," Wilt said.

After leaving RSL, Shore served this past season as an assistant coach of the title-winning Miami FC 2. He has a long history and deep passion for the game. Attending college at Birmingham-Southern, Shore started on the men’s soccer team from 1989-1993 as the goalkeeper. As a two-time NAIA All-American Shore was inducted into the Birmingham-Southern Athletic Hall of Fame.

Following his collegiate career, Shore became an assistant at his alma mater for two years before signing on to play professionally with the Birmingham Grasshoppers. In 1994, he earned recognition for his play by being awarded Goalkeeper of the Year in the USISL.

Following his stint with the Grasshoppers, Shore signed with the New Orleans Riverboat Gamblers, where he served as an assistant coach as well as goalkeeper in 1995. By 1998, he became head coach of New Orleans. Shore led both New Orleans and expansion Lehigh Valley Steam to USL playoff runs. He joined Bob Bradley’s staff in Chicago as its goalkeeper coach in 2000. Just one year later, Shore was promoted to assistant coach. By 2002, Shore had made a name for himself within the Fire organization, and Wilt named him Director of Youth Development and Assistant Coaching Director of the Chicago Fire Juniors in addition to his first-team coaching duties.

Next steps for Shore are building the team with players and staff.

"This is an exciting time for the city of Madison as we look to build a team that our city can call their own.” Shore said. "We will put together a staff and group of players that will not only be exciting to watch on the field, but will be involved in the Madison community as well. We have started to identify players and hope to have some player signing announcements in the very near future."

Open and invitation tryouts for Madison Pro Soccer will be announced soon.