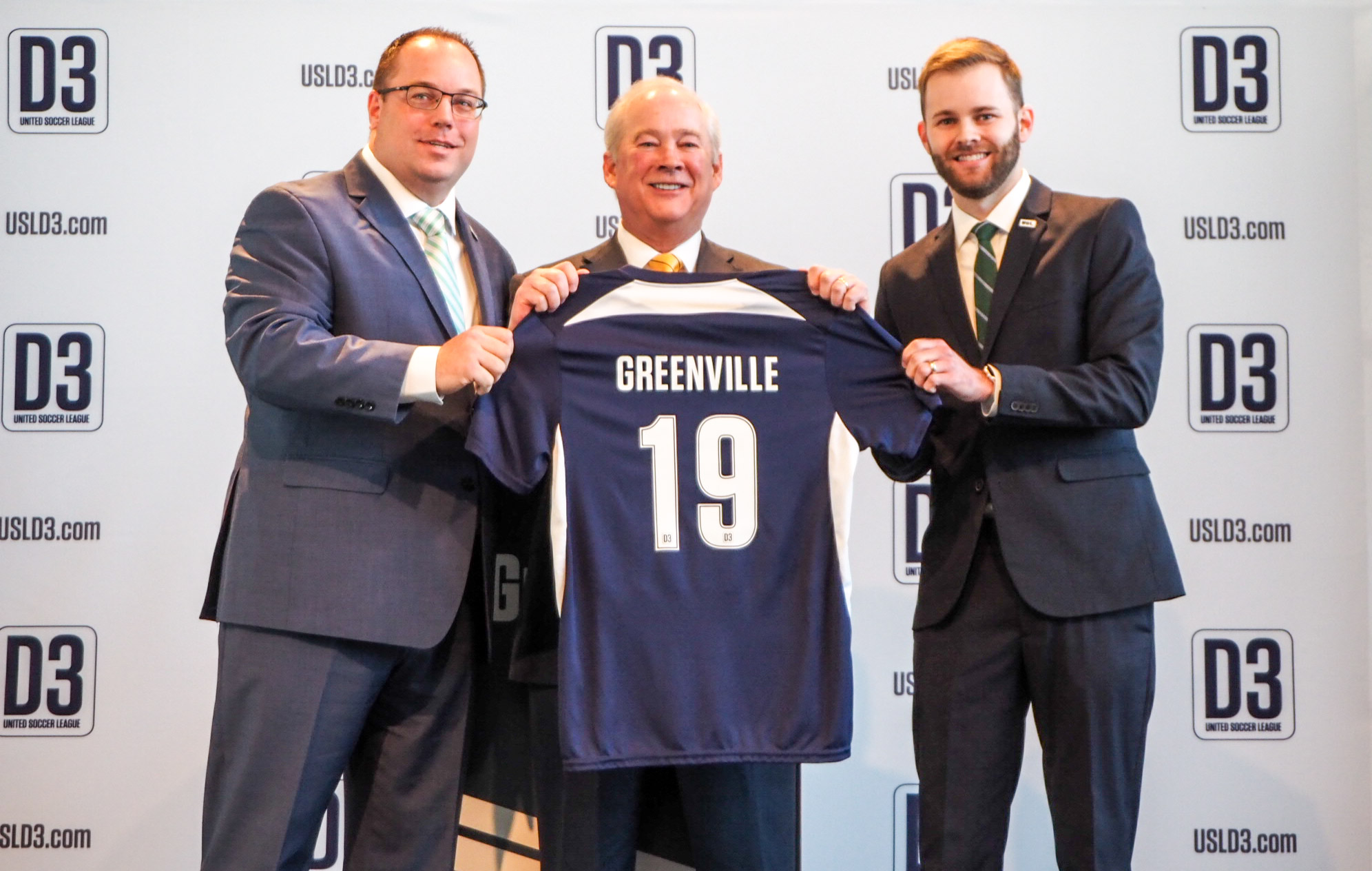 "We are honored to have such an economically diverse and vibrant market like Greenville, South Carolina, as a founding member of USL Division III," USL CEO Alec Papadakis said. "Greenville is a dynamic city, with a storied soccer history driven by the nationally-recognized programs at Clemson University and Furman University, along with the international influence of global corporations headquartered in the region. We welcome Joe Erwin to the USL family. As a long-time resident of this community, successful businessman and major contributor to Greenville’s economic growth, Joe is the right person to lead this effort and develop a successful club for the region’s passionate fans."

Successful Greenville entrepreneur Joe Erwin, who is the co-founder and former President of national marketing agency Erwin Penland and has deep ties to Clemson University as a graduate and Co-Founder of Clemson’s Erwin Center for Brand Communications, joins the USL family’s distinguished ownership group. Doug Erwin, Joe’s son, is also a key member of the Erwin Creates venture creation and development team. Doug started his career with Vornado Realty Trust in Washington, D.C., a preeminent developer with more than 30 million square feet of LEED-certified office and retail space. He returned to Greenville to join Erwin Penland, where he worked on accounts including Verizon, Sears Auto Center and the Greenville Drive before becoming part of the Erwin Creates/Endeavor team in 2016.

“We are thrilled to be a part of the USL’s new Division III league and to bring professional soccer to our community,” Joe Erwin said. “The Upstate has a passion for the sport that extends from community soccer clubs that attract thousands of youth to high school teams that compete at the highest levels and nationally-ranked programs at Clemson University and Furman University.”

“This is a huge win for Greenville and the entire Upstate,” added Carlos Phillips, President of the Greenville Chamber who was in Louisville, Kentucky, when current USL champion Louisville City FC joined the USL in 2014. “I have seen firsthand the impact professional soccer can have on a community – in terms of economic development, company recruitment and attracting and retaining young professionals.”

Chris Lewis was named President of Greenville’s professional soccer team as part of the official announcement on Tuesday.

“Our success strongly depends on having the proven leadership of someone who understands professional sports, the market and, most significantly, is an active member of our community,” Doug Erwin said. “We found that in Chris, and we’ve placed him at the top of the pyramid running this organization.”

Lewis has more than 20 years of experience in professional and NCAA sports and most recently served as the President and General Manager of the Greenville Swamp Rabbits professional hockey team. During his more than five years at the helm of the New York Rangers’ ECHL affiliate, Lewis led efforts that resulted in double-digit revenue and attendance growth. In addition, he oversaw the team’s 2015 re-brand that helped propel the organization to new heights within the Greenville community.

“I am humbled to be selected to be a part of this group and the effort to launch a professional soccer team in the Upstate,” said Lewis. “My family and I have grown to love this area and truly appreciate the incredible quality of life it provides. With both of our children playing academy soccer for two of the prominent clubs in the area, the sport has become an everyday part of our lives that we truly enjoy.

“I am proud and excited to be the steward of this effort and will make sure that this organization is a civic-minded asset to the Upstate that further enhances the tremendous quality of life offered by this community while also providing a top-notch family entertainment experience.”

Greenville’s pro team will make many significant announcements in the coming weeks and months in preparation for the 2019 campaign, including stadium plans, official team branding, coaching staff additions and more. Follow the team on Twitter, Facebook and Instagram for more information and to stay up to date on the latest news about the founding member.

With the addition of Greenville, USL Division III has named three founding members ahead of the inaugural season next spring. Two founding members – Tormenta FC and FC Tucson – will compete in the Premier Development League in 2018. Based in Statesboro, Georgia, Tormenta FC is led by Majority Owners Darin and Netra Van Tassell and has filed plans to construct a state-of-the-art 5,000-seat soccer-specific stadium in Statesboro. FC Tucson, which was acquired by the USL’s Phoenix Rising FC, competes at Kino North Stadium and will anchor the western expansion of USL Division III.

Erwin Creates was established in 2016 by Joe Erwin, co-founder and former president of national marketing agency Erwin Penland. It serves as the platform to support Erwin’s continued entrepreneurial involvement in business consulting, venture creation, education, training and civic activities, including his commitment to growing The Erwin Center for Brand Communications at Clemson University. In spring 2016, Erwin Creates opened Endeavor (https://www.endeavorgreenville.com/), a creative, collaborative community which offers co-working space and business-building opportunities for creative services professionals—and serves as a destination for companies and individuals looking to connect with and help cultivate the Upstate’s vibrant creative class.