Richmond's Darren Sawatzky Voted 2022 League One Coach of the Year

Sawatzky led Kickers to best season in nearly a decade 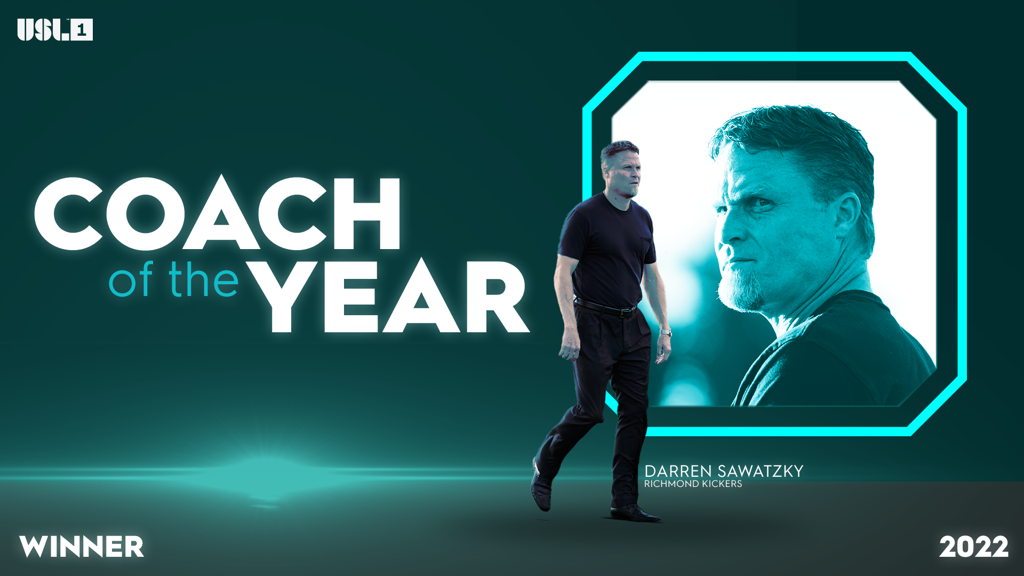 TAMPA, Fla. – USL League One today announced that Richmond Kickers Head Coach and Chief Sporting Officer Darren Sawatzky was voted the 2022 USL League One Coach of the Year. Operating with a lethal offense and stout defense, Darren Sawatzky picked up the second-most regular season points and wins in league history in a stellar 14-7-9 season that saw Richmond finish atop the League One table in its best overall finish since 2013. What’s more, Richmond’s 21 points gained from a losing position and 54 goals were the most in a regular season in league history.

“I work with some great people in Richmond, and on behalf of the technical staff here, we are grateful to work in the game we love,” Sawatzky said. “To be recognized by our peers after a very competitive 30-match regular season is amazing. Additionally, to see players reach personal goals and see the team find consistent form was great.”

Challenging for the top of the table all season long, Sawatzky’s side turned it on in the second half of the season, going unbeaten in nine consecutive matches to close out the regular season – Richmond’s longest such streak since going unbeaten in 10 consecutive matches during the 2016 USL campaign – and lock up the top seed in the postseason. Richmond’s 14 regular season wins and 1.70 points per match were the most for the club in nearly a decade.

“We have worked hard to create a good culture of winning here in Richmond,” Sawatzky added. “We knew it would take time, but three years of work was reflected in a regular season title and an opportunity in the playoffs. We will continue to work and build for our community. Thank you to everyone that supported us this year.”

Following a successful playing career between 1995 and 2004 with the likes of the New England Revolution, Charleston Battery, Colorado Rapids, Seattle Sounders FC and the Portland Timbers, Sawatzky remained in his native Pacific Northwest and began coaching at the high school and collegiate level before joining the Sounders’ coaching staff in 2007.

Between 2012 and 2018, Sawatzky split coaching duties amongst Seattle Sounders FC U-23, the Tacoma Stars and the Guam national team before being named FC Tucson’s head coach in December 2018. Following a season in Tucson, Sawatzky was tabbed as the Kickers’ eighth head coach in November 2019. The 2022 season was the most successful season of Sawatzky’s coaching career.

Sawatzky finished first with 58% of the ballot to earn the award. South Georgia’s Ian Cameron finished second on 25% with a league-record turnaround from 11th place in 2021 to 3rd place in 2022, while Chattanooga’s Jimmy Weekley finished third on 17% with a 6-3-5 record during the second half of the Red Wolves’ season.

USL League One Coach of the Year