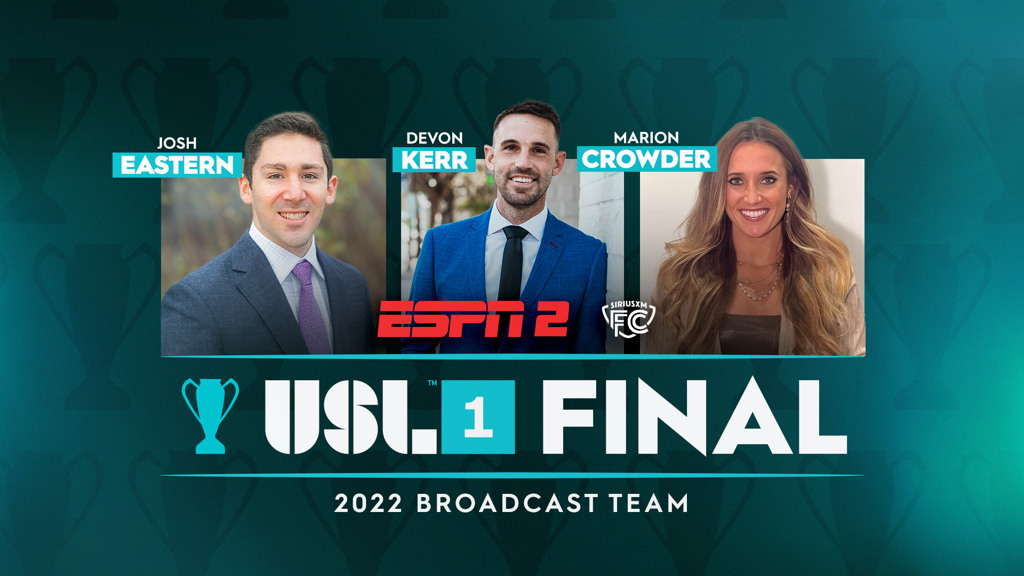 The 2022 League One Final will serve as just the second match in league history and first final to be broadcast on national linear television. Additionally, audio of the call on ESPN2 will be simulcast nationally on SiriusXM FC (Ch. 157).

Eastern is in his fourth season calling matches in the USL Championship and League One and will call his third League One Final. In addition to his work in the USL, Eastern also serves as a play-by-play announcer for the NWSL and Concacaf events such as the Gold Cup, Scotiabank Concacaf Champions League and more. Eastern is a 2019 graduate of Indiana University.

Serving as the USL Championship’s lead analyst since 2018, Kerr is also co-host of USL All Access on Sirius XM FC. Kerr is the lead analyst for the NCAA Men’s College Cup and for Concacaf events such as FIFA World Cup Qualifying and the Scotiabank Concacaf Champions League. Earlier this year, he called the 2022 Concacaf Champions League Final and was the only individual to provide analysis of each round of the Lamar Hunt U.S. Open Cup, including at field level pregame from the final from Exploria Stadium. Kerr also appears on ESPN, NCAA, EA Sports and MLS platforms. He played collegiately at Stetson University and competed in Germany’s Regionalliga with Altona 93.

Serving as the pitch-level analyst, Marion Crowder will make her League One broadcast debut after previously serving as an analyst for the NWSL on Paramount+, SEC women’s soccer on ESPN and SEC Network, and the USL Championship on ESPN+. Crowder earned her M.A. in Journalism and Mass Communication from the University of Georgia where she was a three-time All-SEC selection with the Bulldogs’ soccer program. Familiar with League One, Crowder previously served as the Media Relations Manager and Reporter for Greenville Triumph SC from 2019 to 2021.