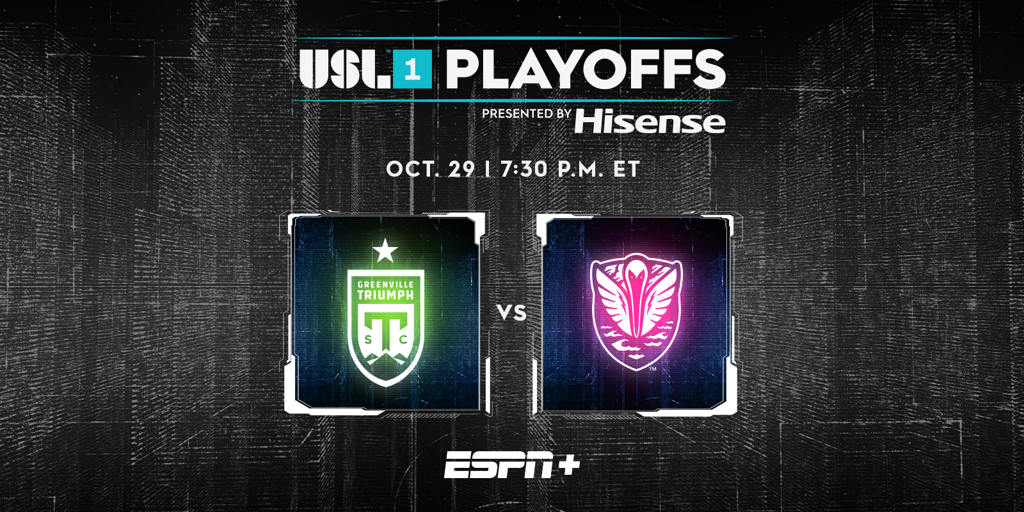 Aiming to appear in its fourth-consecutive League One Final, #2 Greenville Triumph SC (12-8-10, 2nd) starts its playoff campaign by hosting red-hot #3 South Georgia Tormenta FC (12-9-9, 3rd) - the only League One side Greenville failed to defeat during the regular season.

Triumph SC picked up just one win in its final eight matches but was able to lock up a first-round bye thanks to a strong first half of the season. Tormenta FC's nine points earned in its final five matches of the regular season was the most amongst clubs remaining in the postseason. In the Quarterfinals, South Georgia claimed its first postseason victory in its first playoff appearance over Charlotte due to a Kazaiah Sterling brace.

The Greenville-South Georgia matchup is interesting for a lot of reasons, but one that sticks out is the fact that Triumph SC was last in the league in points gained from a losing position and Tormenta FC dropped the most points from a winning position. To put it simply, Greenville struggled to make a comeback when trailing and South Georgia had a hard time holding onto leads. While these two factors may nullify each other in tonight's match, it will be interesting to see how this stat potentially plays out.

GVL - Paul Christensen: With Greenville's difficulty overcoming deficits, Christensen will need to limit the damage from Sterling and Adjei to allow Greenville to have a chance at the win. A Goalkeeper of the Year finalist, Christensen’s 10 clean sheets led the league and is tied for the second-most in a single regular season in league history.

TRM - Kazaiah Sterling: With a club-record 13 goals in just 23 appearances, Sterling's brace in the Quarterfinals has South Georgia on the brink of something special. The former Tottenham Hotspur FC forward provided a crucial attacking spark all season long to help South Georgia to its first playoff appearance in the professional ranks.