Richmond lead league with three first-team selections; 10 of 11 clubs represented on either team 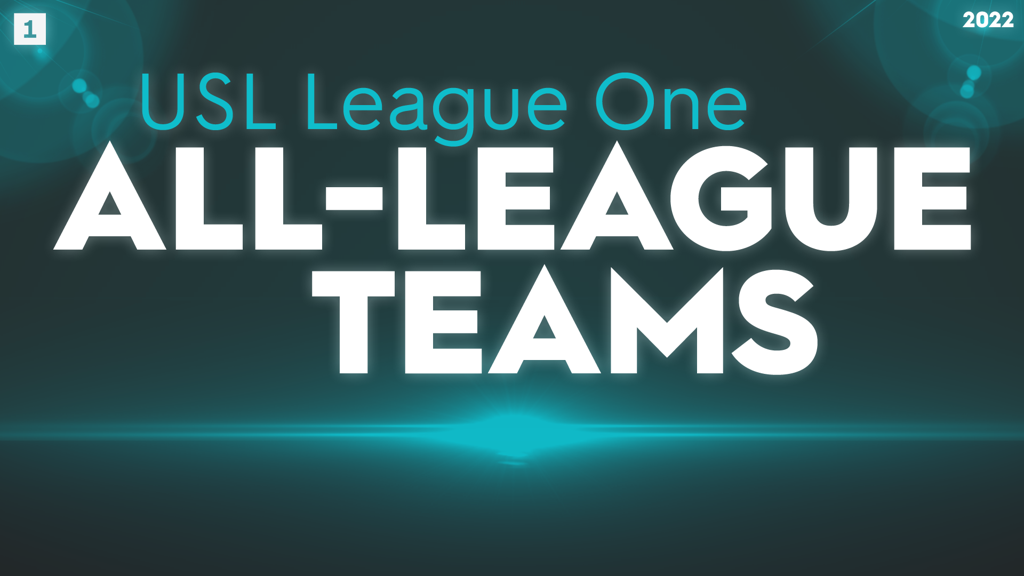 TAMPA, Fla. – USL League One today announced the 2022 All-League First and Second Teams, honoring the regular season’s top performers. The Richmond Kickers saw a league-high three players named to the First Team, while Richmond and Chattanooga Red Wolves SC tied for the most selections across both teams with four. 10 of the 11 League One clubs are represented on the All-League Teams.

Richmond forward and three-time Golden Boot winner Emiliano Terzaghi is the lone player to reprise his role in the All-League First Team as his 17 goals helped lead the Kickers to their best regular-season finish since 2013. Across both teams, Greenville defender Brandon Fricke earns his fourth-consecutive All-League honor – a league record – while Omaha goalkeeper Rashid Nuhu and Richmond goalkeeper Akira Fitzgerald earn their third and second All-League honors, respectively.

Numerous All-League debutants made a splash for their respective clubs, including Northern Colorado defender Arthur Rogers, who set a single-season league record with 80 chances created. He is joined among the first-time selections by Richmond midfielder Jonathan Bolanos, who notched a league-record 11 assists, and South Georgia forward Kazaiah Sterling, who set a club record with 13 goals in just 23 appearances.

The 2022 USL League One All-League Teams were voted on by team technical staffs and executives. 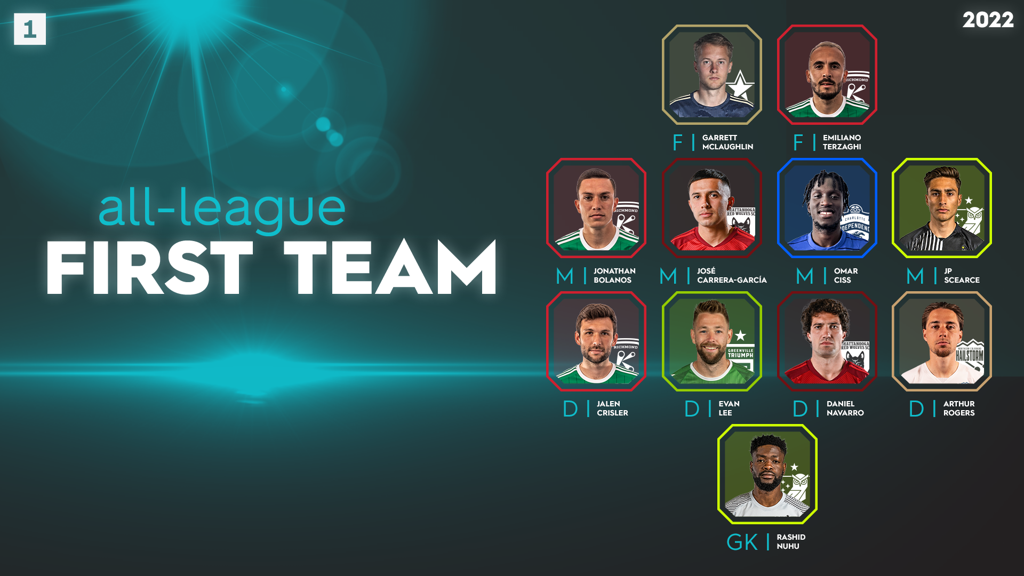 GK – Rashid Nuhu, Union Omaha: The back-to-back Golden Glove winner and two-time All-League Second Team selection broke into the First Team for the first time in his three-year Omaha career. The Ghanaian led the league with a 0.98 goals-against average and helped Omaha to the fewest goals conceded during the season (33).

D – Jalen Crisler, Richmond Kickers: Crisler earns his first All-League honor in his third season in League One and second in Richmond. The 28-year-old defender finished second in league history with his 154 clearances in a single season and led the Kickers in duels won with 138, blocks with 25 and possessions won in the defensive third with 106.

D – Daniel Navarro, Chattanooga Red Wolves SC: Despite missing half of the regular season, Navarro helped Chattanooga to a strong second half of the campaign which saw the Red Wolves pick up 1.66 points per match and register a +10-goal differential in matches that Navarro played in compared to just 1.13 points per match and a +4-goal differential when the defender was absent.

D – Arthur Rogers, Northern Colorado Hailstorm FC: Rogers set a new single-season league record with 80 chances created in an incredibly productive first season in Windsor. The 26-year-old Englishman’s nine assists were the second-most on the season and most by a defender in a single season in league history.

M – Jonathan Bolanos, Richmond Kickers: Despite sitting out a third of the season due to injury, Bolanos set the single-season league record for assists with 11 to help the Richmond Kickers to their best regular-season finish since 2013. Bolanos also posted an individual single-season high with six goals.

M – José Carrera-García, Chattanooga Red Wolves SC: In addition to a pair of goals and seven assists, the Red Wolves’ captain led the league in tackles won with 36 and was tied for second with 55 chances created.

M – Omar Ciss, Charlotte Independence: The 21-year-old Senegalese midfielder enjoyed a breakout campaign after a pair of seasons in the USL Championship to begin his professional career. Ciss tallied three goals, one of which was a game-winner, and two assists to go along with a team-high 33 tackles won and 140 duels won.

M – JP Scearce, Union Omaha: Leading Omaha’s young core, the third-year Owl won – by far – the most duels in the league this season with 225 and was the second-highest scorer on the team with a career-best seven goals to nearly double his career goal total. Scearce’s two braces this season also serve as the most in club history.

F – Garrett McLaughlin, North Carolina FC: Nearly doubling his career goal total from two previous professional seasons, McLaughlin finished second in the Golden Boot race with 14 goals for NCFC. McLaughlin’s 14 tallies were the most for NCFC since Daniel Rios scored 20 goals for the club in the 2018 USL Championship season.

F – Emiliano Terzaghi, Richmond Kickers: Claiming his third consecutive Golden Boot in his third season in the league, Terzaghi became the first player in league history to score 10-plus goals in three or more seasons. The Argentine’s 17 goals were the second-most scored in a single season behind Terzaghi’s own record of 18 set a season ago. 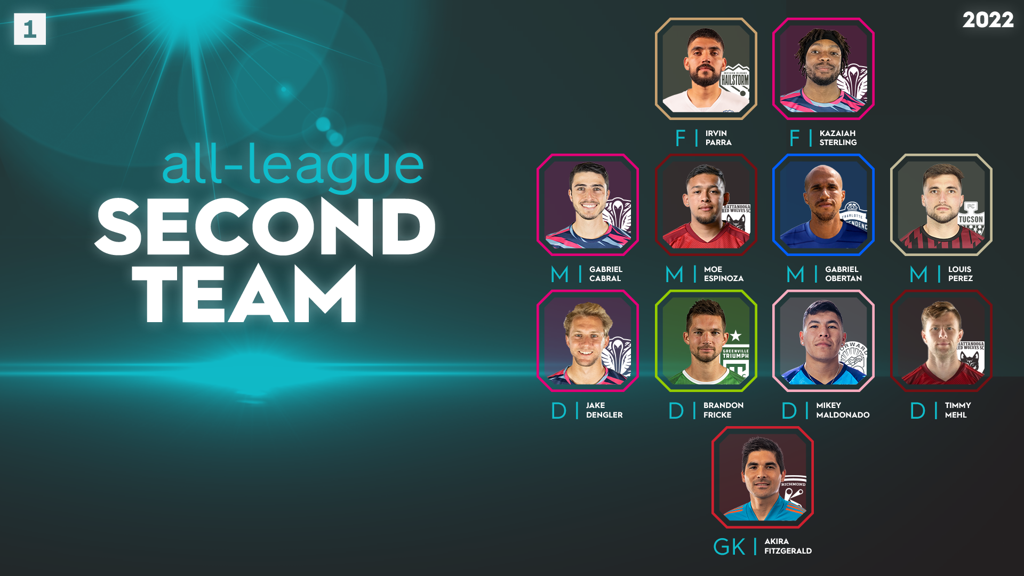 D – Jake Dengler, South Georgia Tormenta FC: Tormenta FC’s towering defender locked down the South Georgia backline in his first season in Statesboro. Dengler found the back of the net for the first time in his professional career and finished fifth in the league with 24 blocked shots.

D – Brandon Fricke, Greenville Triumph SC: Fricke earned his fourth All-League honor – the most in league history – following another stellar campaign with Greenville. Fricke helped Greenville to a league-best 10 clean sheets with his team-high 89 clearances. Fricke’s lone goal on the season also positions him as just the fourth player and only defender in league history to score in four separate seasons.

D – Mikey Maldonado, Forward Madison FC: After his debut professional season with North Texas SC in 2021, Maldonado joined the ‘Mingos in the offseason and went on to record his first professional goals and assists – two and four, respectively. Maldonado also created a team-high 45 chances in Madison.

D – Timmy Mehl, Chattanooga Red Wolves SC: Joining the Red Wolves on loan from the Tampa Bay Rowdies in June, Mehl hit the ground running and proved to be a welcome addition to the Chattanooga backline. The USL Championship loanee scored twice and won nearly 80 percent of his tackles.

M – Gabriel Obertan, Charlotte Independence: After spending the second half of the 2021 USL Championship season with the Jacks, the veteran Frenchman rejoined the Independence midway through the 2022 campaign and made his presence known with three goals, three assists and 21 chances created.

M – Louis Perez, FC Tucson: After a professional debut season with Pittsburgh Riverhounds SC in the USL Championship in 2021, Perez proved incredibly productive in his first season in League One. Perez was tied for the team lead in goals with five and led his side with seven assists – more than quadrupling his combined career goals and assists total entering the season. The Frenchman’s 55 chances created were tied for the second most on the season.

F – Irvin Parra, Northern Colorado Hailstorm FC: Parra scored 12 goals in his first season with the Hailstorm to record his third season in either the USL Championship or USL League One with 10 or more goals.