USL League One Team of the Week – Week 29

TAMPA, Fla. – USL League One today announced the Team of the Week for Week 29 of the 2022 regular season with Charlotte Independence midfielder Gabriel Obertan named Player of the Week. Featuring the fifth brace of his illustrious career, Obertan propelled the Jacks to a third consecutive postseason berth in a 5-1 thrashing of rival NCFC.

“I think it was all about the spirit, the mindset today because we knew it was a win-or-go-home situation,” Obertan said. “It was a team effort, it could’ve been 1-0, but it was 5-1, it didn’t matter. We just wanted to go through.”

Following a scoreless first 35 minutes, Obertan assisted Chris Hegardt in a perfect give-and-go play to open the scoring in a must-win match for the Jacks. From there, it was all Charlotte as Obertan scored the next two goals from nearly the exact same right-hand side of the penalty area in the 40th and 54th minute, respectively.

“We showed up and played well,” Charlotte Head Coach Mike Jeffries said. “I’m proud of the guys for coming out with good intensity and good concentration. They stepped up their game tonight for sure. It’s nice to get a win, get in the playoffs and give ourselves a chance.”

Charlotte’s 5-1 victory fittingly sees the first-year League One side place five on the Team of the Week. A 2-0 victory over Omaha earns Central Valley a pair of spots, and Greenville, Madison, Omaha and South Georgia each place one player on the list. 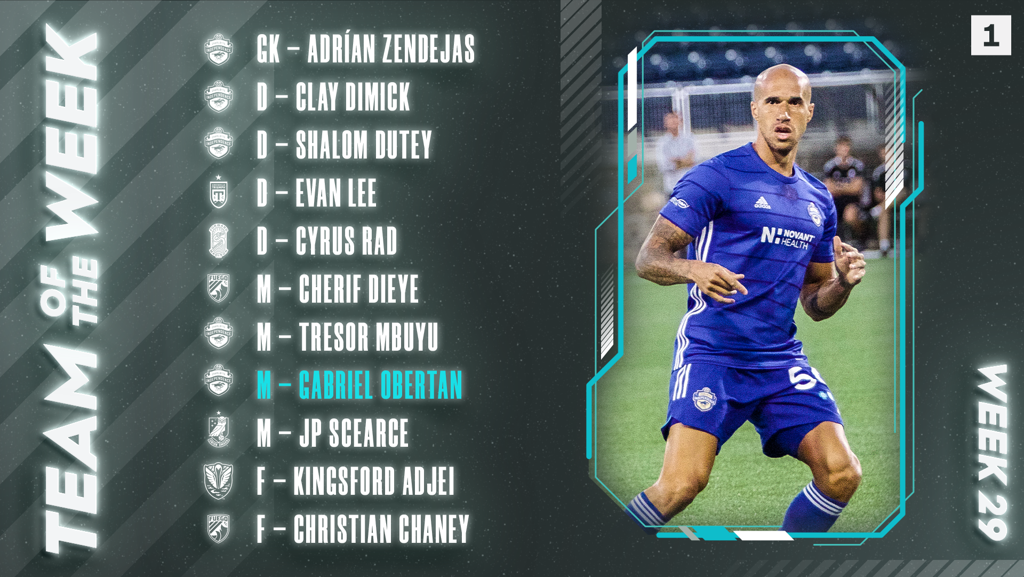 GK – Adrían Zendejas, Charlotte Independence: While facing the highest expected goals against mark in Week 29, Zendejas racked up a league-high six saves to help Charlotte lock up its third consecutive postseason appearance and first in League One.

D – Shalom Dutey, Charlotte Independence: Dutey assisted Obertan’s second goal in Charlotte’s 5-1 dismantling of NCFC. The defender helped limit the opposition to just one goal and won 100% of his tackles.

M – Cherif Dieye, Central Valley Fuego FC: Dieye added three more points to Fuego FC’s inaugural season with his match-winning goal in the 61st minute against Omaha. Dieye also led the league with 12 recoveries on the week to go along with a 100% tackle success rate.

M – Tresor Mbuyu, Charlotte Independence: Accumulating just one goal and one assist across three previous professional seasons combined, Mbuyu exploded for an incredible 11 goals and eight assists in 2022 that was capped off by a one-goal, one-assist performance in Charlotte’s playoff-clinching regular-season finale.

M – Gabriel Obertan, Charlotte Independence: Obertan scored his first brace since 2020 as the veteran midfielder propelled the Jack to a third consecutive playoff appearance with two goals and one assist.

F – Christian Chaney, Central Valley Fuego FC: 7th Chaney wrapped up his first season back in his native Fresno by scoring his 10th goal of the season – the first double-digit scoring season of his seven-season career – to wrap up a special inaugural campaign with Fuego FC.