USL League One Team of the Week – Week 27

TAMPA, Fla. – USL League One today announced the Team of the Week for Week 27 of the 2022 regular season with North Carolina FC midfielder Nicolas Rincon named Player of the Week. The 16-year-old recorded an assist and notched the match-winning score in NCFC’s 2-1 victory over Fuego FC on Wednesday.

Rincon recorded his second professional assist with a masterful dribble through the Central Valley defense before dishing it out for Garrett McLaughlin to tap in for the opening score. Later in the match, Rincon went on to score his first professional goal on a curling, first-time finish that would serve as the crucial match-winning goal for NCFC.

“I am very happy for this week,” Rincon said. “I was working all year and waiting for my opportunity, but I can’t give myself all the credit. Mentally, I think all the guys have helped me to keep working hard, and I’ll continue that hard work.”

“I am extremely proud of Nico for this recognition and the way he has grown this year,” NCFC Head Coach John Bradford said. “His performances over the last few matches have been very strong and he is only going to get better. All the credit goes to Nico’s mentality and determination to believe in the process and work as hard as he can.”

Showing promise with NCFC’s USL Academy and League Two teams earlier in the year, Rincon was signed to a professional contract with the first team in Aug. 2022 and has made nine appearances for the League One side this season.

After a pair of undefeated weeks, North Carolina FC and Chattanooga Red Wolves SC lead all clubs with four and three players named to the Team of the Week, respectively. The Richmond Kickers, South Georgia Tormenta FC, Charlotte Independence and Central Valley Fuego FC all place one representative on the list each. 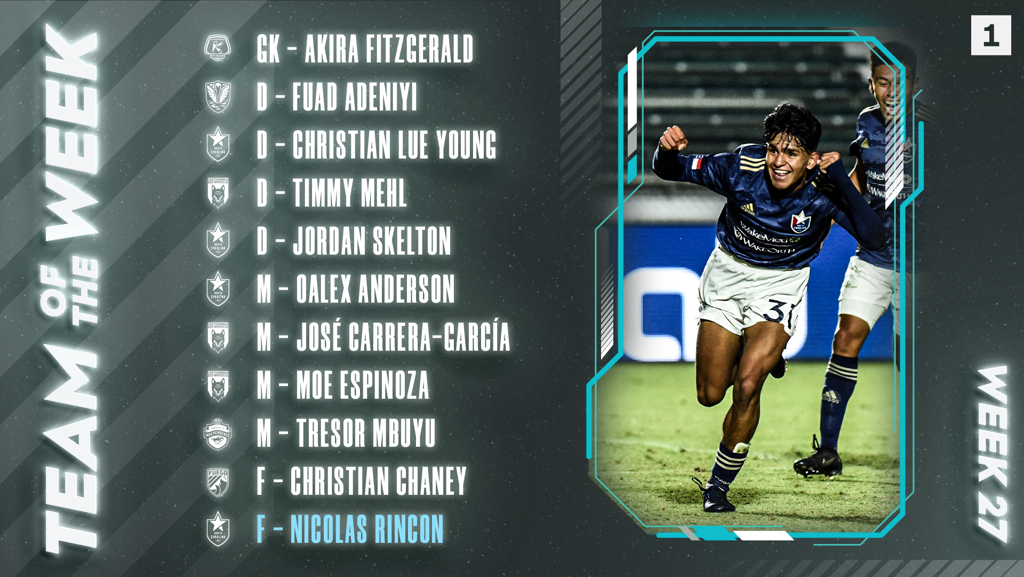 GK – Akira Fitzgerald, Richmond Kickers: Fitzgerald was tied for a week-high seven saves in his side’s 1-1 draw with Tormenta FC on Sunday. The veteran ‘keeper conceded just one goal.

D – Fuad Adeniyi, South Georgia Tormenta FC: The 27-year-old defender recorded his first professional goal and the first-ever goal at Tormenta Stadium to earn the hosts a crucial draw against the league-leading Kickers on Sunday evening.

D – Christian Lue Young, North Carolina FC: In a four-point week for North Carolina, Lue Young lead the league in recoveries with 17 and added to his side’s success with six clearances and four interceptions.

M – Oalex Anderson, North Carolina FC: Salvaging a draw against Omaha, Anderson scored the equalizing score with less than 10 minutes remaining in the match. The Saint Vincent and the Grenadines international also tallied a league-high 19 duels won, earned 10 recoveries and created a trio of chances.

M – Tresor Mbuyu, Charlotte Independence: Another breakout star in League One, Mbuyu recorded his 10th goal of the season in Charlotte’s loss to Chattanooga.

F – Christian Chaney, Central Valley Fuego FC: With his goal against NCFC, Chaney confirmed the highest-scoring season of his seven-year professional career and has scored three goals in his last five outings for the expansion side.

F – Nicolas Rincon, North Carolina FC: The only player to record both a goal and assist in Week 27, the 16-year-old impressed with an additional 10 recoveries, nine duels won, 83% passing accuracy and 100% tackle success rate in two unbeaten matches for NCFC.