USL League One Team of the Week – Week 26

TAMPA, Fla. – USL League One today announced the Team of the Week for Week 26 of the 2022 regular season with Northern Colorado Hailstorm FC defender Brecc Evans named Player of the Week. Evans became just the fourth defender in league history to record a brace as he led his side to an impressive victory over Omaha on Wednesday.

In need of three points, Northern Colorado leaned heavily on the defensive prowess of its backline against Omaha and was rewarded with a surprise brace from defender Brecc Evans. The 23-year-old center back opened the scoring with an impressive strike from over 25 yards out to stun Omaha and Piedrahita in the 23rd minute. With little time remaining, Evans came through with a match-winning header in the 84th minute to seal the Hailstorm's improbable and much-needed win.

“It’s absolutely massive,” Evans said. “We’re in a very tight playoff race and anything except three points tonight was really unacceptable for what we want to do, go to the playoffs and achieve this year. That was a massive game as a team, we have to continue that down the stretch.”

“I did not expect Brecc to come up with two goals, but he ended up with a pair of great goals," Hailstorm Éamon Zayed said. "I don’t want to be that biased coach, but I think if we hadn’t won this game, I thought it would have been unfair. It wasn’t the prettiest game, it matched the weather, but I just felt that we did enough. I would have been devastated had we not picked up three points.”

Elsewhere, FC Tucson lead the way with four players named to the Team of the Week following an impressive six-point week. Seven other clubs placed a single representative on the list. 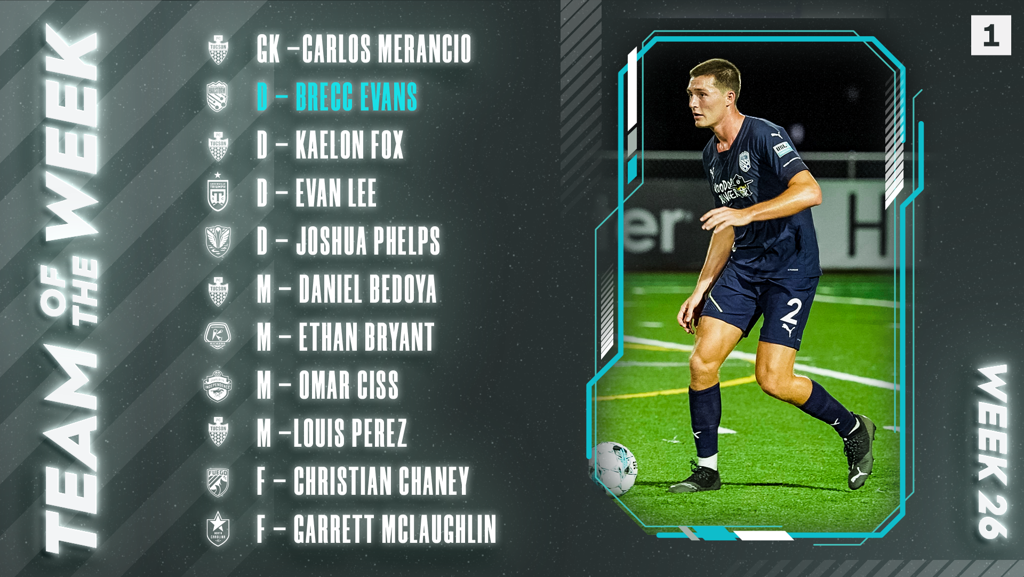 GK – Carlos Merancio, FC Tucson: Helping Tucson to a six-point week, Merancio reeled in a week-high seven saves and allowed just one goal in another impressive week for Tucson.

D – Brecc Evans, Northern Colorado Hailstorm FC: The only defender to record a brace this season and just the fourth in league history to do so, Evans’ first career brace led Northern Colorado to an improbable upset victory over visiting Omaha.

D – Kaelon Fox, FC Tucson: In a pair of Week 26 victories for Tucson, Fox tallied a match winner against Chattanooga to go along with 11 duels won and six recoveries.

D – Joshua Phelps, South Georgia Tormenta FC: Phelps knocked in the match winner against Madison to confirm his third consecutive season with a goal for Tormenta FC. Phelps went on to win 3 of his 4 duels and reeled in four recoveries.

M – Daniel Bedoya, FC Tucson: Bedoya scored his third goal of the season in Tucson’s big 2-1 win over visiting Chattanooga on Saturday. The Colombian midfielder earned 12 recoveries and won 100% of his tackles.

M – Omar Ciss, Charlotte Independence: In addition to his banger of a match winner, Ciss completed 92% of his tackles, and recorded three clearances and three recoveries.

F – Christian Chaney, Central Valley Fuego FC: Chaney opened the scoring with a match-winning goal in the ninth minute of Fuego FC’s match against Madison on Wednesday. Chaney tallied 10 shots and a pair of chances created in two matches.

F – Garrett McLaughlin, North Carolina FC: With a realistic chance to catch up to Emiliano Terzaghi at the top of the Golden Boot race, McLaughlin scored his 13th goal of the season against Charlotte on Saturday. McLaughlin won over 50% of his duels and created a pair of chances.