USL League One Team of the Week – Week 24

After Tormenta FC’s 3-1 loss to Richmond on Wednesday, the Ibises responded in a big way on Saturday and wasted no time in doing so. Just over 100 seconds into the match, Sterling powered a perfect Tobias Otieno pass off the fingertips of the Northern Colorado goalkeeper and in for the early lead.

Confirming his second just before the halftime intermission, Sterling capitalized on a loose ball in the box and slotted the ball into an empty net. Finally securing his hat trick, Sterling powered home a goal from the penalty spot in the 76th minute to confirm the resounding victory.

“I am happy to finally get my first hat trick with Tormenta FC after several braces throughout the season,” Sterling said. “I am proud to have reached the landmark of becoming the top goalscorer during the regular season for Tormenta FC. I was fortunate to be in the right areas tonight to get the three goals, however, I want to thank my teammates for helping it be one of the easiest hat tricks I ever scored.”

“Kazaiah’s a superb football player,” Tormenta FC Head Coach Ian Cameron said. “We knew in the recruiting process that our club would be a great environment for him to find his best form again. This season the team has done a very good job in providing him with key passes and opportunities to score. You can see when he celebrates how much he appreciates and owes the guys around him, setting him up for success”

South Georgia Tormenta FC lead all teams with three players named to the Team of the Week. In addition to the six teams that placed one representative on the list, FC Tucson saw two Team of the Week entrants following its strong defensive performance against Omaha. 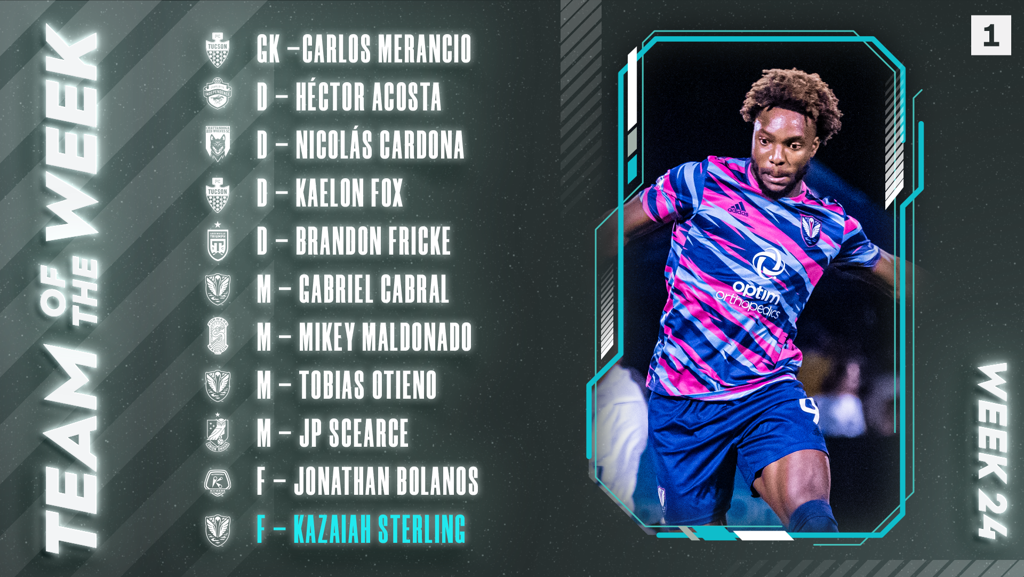 GK – Carlos Merancio, FC Tucson: The only goalkeeper to keep a clean sheet in Week 24, Merancio guided Tucson to a convincing win over Omaha with three saves and his fourth clean sheet of the season.

D – Brandon Fricke, Greenville Triumph SC: With his goal against Charlotte, Fricke has now scored in every League One season. The 30-year-old defender also completed over 90% of his passes and tallied three recoveries.

M – Gabriel Cabral, South Georgia Tormenta FC: Across two matches, Cabral recorded 18 recoveries five interceptions, and four chances created – all the most or tied for the most in Week 24. Cabral also won 80% of his tackles and completed nearly 80% of his passes.

M – Tobias Otieno, South Georgia Tormenta FC: Otieno assisted Kazaiah Sterling’s third-minute goal to notch his third assist in the past four matches. The Kenyan midfielder also created a pair of additional chances and completed over 80% of his passes across two Week 24 contests.

M – JP Scearce, Union Omaha: Despite Omaha’s shutout loss to Tucson, Scearce had a productive evening on the road with 11 recoveries and a 90% duel success rate on 19 total challenges. The 24-year-old midfielder also won six fouls.

F – Jonathan Bolanos, Richmond Kickers: The league’s assist leader added to his total on Wednesday with an impressive two-goal, one-assist performance in Richmond’s 3-1 victory over Tormenta FC. Bolanos has contributed to all six of Richmond’s goals in their last two contests.