USL League One Team of the Week – Week 23

Following an early Lachlan McLean score, the Aussie provided a perfect long ball to Amann who raced down the pitch to convert a one-on-one opportunity against Pulisic in goal. Later, Amann smashed in a rebounded ball in the box to give the Hailstorm a commanding 3-0 lead just before the conclusion of first-half stoppage time. Finally, Amann would power a penalty off the fingertips of Pulisic in the 79th minute to confirm his hat trick and the Hailstorm victory.

“I’m not going to say I wasn’t a little nervous stepping up to the spot,” Amann admitted. “But I always bet on myself when it comes to penalty kicks and I’m one for one this year.”

With only four hat tricks across the league this season, Amann becomes just the 15th player in league history to record a hat trick. Fittingly, Northern Colorado’s first-ever hat trick came from the Westminster, Colo. native who hails from just an hour south of Windsor.

“It’s been coming, Trevor’s been in and around the box,” Northern Colorado Head Coach Éamon Zayed said. “He’s hit the post, he’s hit the bar, he’s had goals disallowed and he’s missed some chances as well. With Irvin [Parra] out, I challenged Trevor and Lachlan to go out and score some goals.  He was due a game like that and hopefully he continues now.

“We’re starting to feel a bit more of a rhythm. Being at the same place for training and playing here in Severance. First back-to-back wins of the season and coming at the right time, with only five games left now, and then hopefully playoffs.” 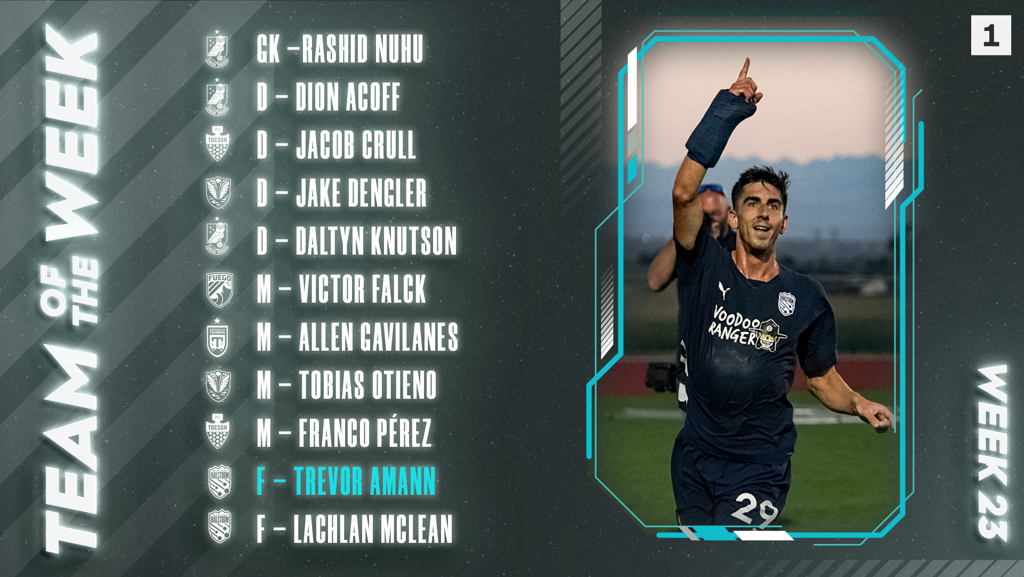 GK - Rashid Nuhu, Union Omaha: In a historic week for the Owls, Nuhu made eight saves and conceded just one goal in a six-point Week 23 that saw Omaha top the table.

D - Dion Acoff, Union Omaha: After coming off the bench in Omaha’s 1-0 win over Madison on Wednesday, Acoff made the most of his start against Chattanooga with an incredible stoppage-time winner to go along with seven recoveries and a perfect dribble completion and tackle success rate.

D - Jacob Crull, FC Tucson: Reeling in the most recoveries by a field player on the week, Crull helped Tucson to a win on Saturday and assisted Franco Pérez’s opening score against Fuego FC on Wednesday.

D - Jake Dengler, South Georgia Tormenta FC: Dengler racked up the most clearances across the week with nine as South Georgia claimed a crucial 2-0 victory over Charlotte on Wednesday. The 23-year-old defender also added to the win with two blocks, an interception and a recovery.

M - Victor Falck, Central Valley Fuego FC: Enjoying the most productive season of his three-year professional career, Falck tallied his sixth goal of the year in match-winning fashion against Tucson on Wednesday. His five chances created are the most amongst players that played in just one Week 23 match.

M - Tobias Otieno, South Georgia Tormenta FC: After missing the first half of the season, the former Owl turned Ibis has already matched his offensive production from his title-winning season with Omaha a year ago. In addition to assisting Kingsford Adjei’s match-winner, Otieno reeled in 12 recoveries and won 100% of his aerial duels.

M - Franco Pérez, FC Tucson: Seeing increased usage as the season winds down, the Aldosivi loanee has contributed to Tucson’s late-season playoff push. Pérez tallied a goal and an assist in Tucson’s tough 3-2 loss to Fuego FC on Wednesday before contributing with a pair of chances created and a trio of fouls won in his side’s win over Charlotte.

F - Trevor Amann, Northern Colorado Hailstorm FC: Filling the void of a suspended Irvin Parra, Trevor Amann exploded for the first hat trick in Hailstorm history. His four shots on target were tied for the most in Week 23 and no other player scored more than once.

F - Lachlan McLean, Northern Colorado Hailstorm FC: The Aussie attacker paired nicely with Amann up top as McLean recorded a goal and an assist in the same match for the first time since May 2021. Additionally, McLean completed 100% of his long balls and won 100% of his tackles.