Birds of a Feather: Forward Madison FC and Eintracht Frankfurt

On the unique partnership between the Flamingos and the Eagles 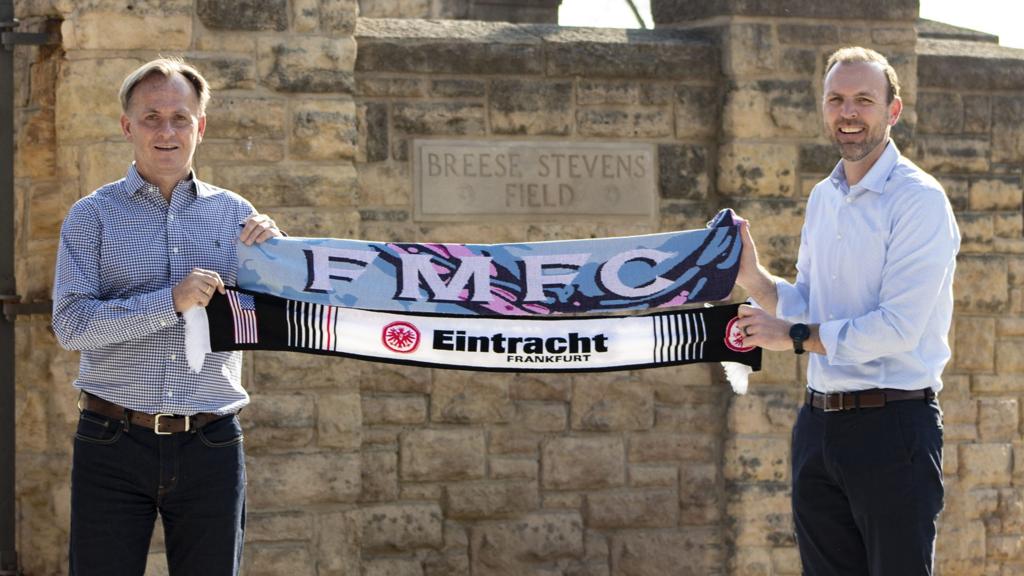 On May 21, 1925, Eintracht Frankfurt’s Waldstadion was officially unveiled following four years of construction in central Germany. 349 days later and 4,300 miles away, Breese Stevens Field was dedicated in Madison, Wisc. on May 5, 1926, 92 years prior to the conception of current tenants Forward Madison FC.

Today, the 123-year-old German giants and four-year-old ‘Mingos have developed one of the more unique relationships in world football, bridging the Atlantic Ocean with a common vision of community-driven clubs aiming for success on and off the field.

“While we have very different histories, our values and what we want to accomplish in our local markets are similar,” FMFC COO Conor Caloia said. “We both want to be reflective of the community and not be afraid to speak out on what we think is right for our communities.

“As we got to know each other a little more, we realized that the way we want to run our operation is similar to how they run theirs. As we dug further into this, Eintracht felt like the right fit and a great partner for us to be building with.”

The first phase of the partnership materialized as a series of youth development camps held in August 2021 and 2022 geared toward youth soccer players between the ages of 10 and 18. The camps themselves are conducted by Eintracht’s staff – primarily Eintracht’s Head of Sports Projects, Americas and former DFB-Pokal-winning Eagle defender Armin Kraaz.

“They've been amazingly well received,” Caloia said of the camps. “Any time you can bring a club with the history of Frankfurt to our market, to our fans, to our youth, it's absolutely a positive. It’s fairly common for clubs to have relationships with European clubs, but this one’s unique in that we’re bringing Eintracht’s staff to our youth players, and they are the ones running these camps and clinics. It’s been great so far and we’re excited about the future.”

“They have exceptional creativity and a very up-to-date media presence that resonates especially with the younger demographic,” Kraaz said of Madison. “FMFC as well values diversity and the exchange of cultures as much as Eintracht does. Frankfurt is one of the most internationally oriented cities in Germany and a lot of our youth players do have an international background.”

Speaking on the exchange of cultures, the participants in these camps are educated not just in the German style of soccer on the pitch, but the culture of the nation off it.

“Armin [Kraaz] and his staff really do a good job of working German culture into these camps,” Madison’s Director of Digital Content, Evan Warwick said. “So, when these campers go home each day, they’re not just taking back those soccer skills but also a new German word or a new German food with them.”

Back on the pitch, Eintracht is fresh off a thrilling victory in penalty kicks against legendary Scottish club Rangers FC – a partner with USL Championship side Orange County SC – to claim the 2022 UEFA Europa League crown, the Eagles’ first European trophy since lifting the 1980 UEFA Cup. Set for a 2022 UEFA Super Cup clash with Real Madrid CF on Wednesday night in Finland’s Helsinki Olympic Stadium, Eintracht’s recent success on both the European and German stage has led the Bundesliga side to new heights domestically and abroad.

“From a communication and partnership perspective, it provides more visibility,” Kraaz said of Frankfurt’s recent success. “With more eyes on us, we can push our main driver – football and the first teams – but also our club values, storytelling and history.

“It also puts Eintracht at one of the highest sporting levels in the world— from both the men’s and women’s teams, who also are in the UEFA Champions League group stage and UEFA Women’s Champions League qualification, respectively.”

Frankfurt’s goal of growing its footprint in the United States serves as mutually beneficially to Madison’s goal of developing and engaging local youth. As a result, the pair’s unique partnership is off to a promising start – all the while being fittingly nestled in the capital city of the state with the third-highest German American population in the country.

“Our goal is to build on what we've done and keep doing more,” Caloia said. “It’s pretty special for these youth players here in Madison to receive instruction from staff that works full time for the Europa League champions. We're really fortunate to have that opportunity in our community here and we look forward to doing more with Frankfurt in Madison and beyond.”