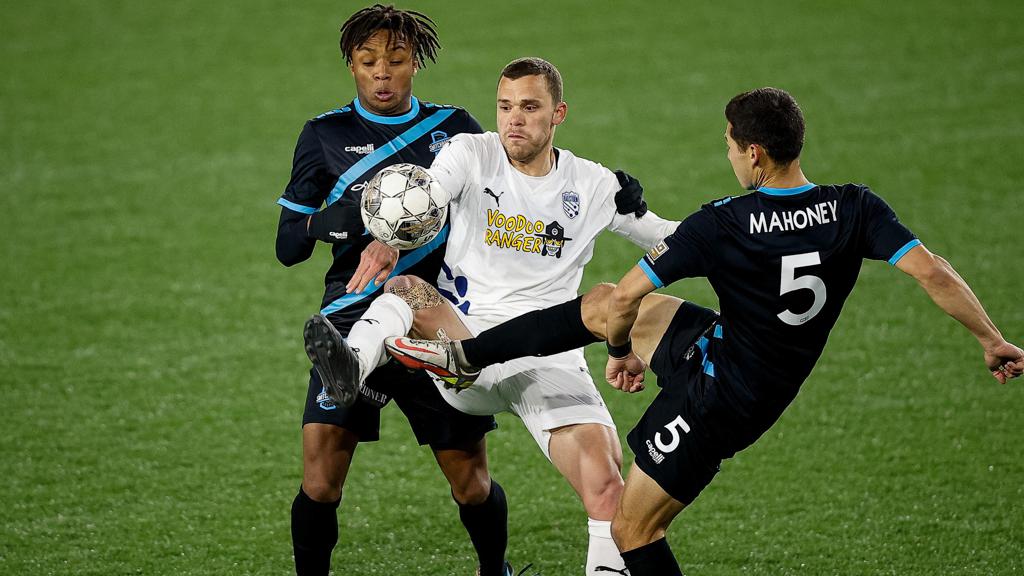 The 27-year-old led League One in assists in 2020 before winning league in 2021 | Image Credit: Colorado Springs Switchbacks FC

“We are always evaluating our team and looking to improve and add new quality pieces,” Chief Sporting Officer and Head Coach Darren Sawatzky said. “We had an opportunity to add a very good player to our team at the midpoint of the season and we jumped at it.

“Ethan gives us a dynamic attacking player with a history of creating chances and winning. We look forward to adding him to the locker room as we continue to grow the winning culture at our club.”

Vanacore-Decker joins the Kickers with a decorated USL League One background as a member of Union Omaha during their inaugural 2020 season and their 2021 championship season before joining the Hailstorm in Spring 2022.

During Union Omaha’s inaugural season in which it finished as League One finalists in the COVID-shortened season, Vanacore-Decker led the league with six assists and scored the second-most goals on the team (3) while finishing All-League Second Team. The forward started seven of 11 matches during Omaha’s championship run before injury cut his season short.

In the first-ever matchup between Richmond and Northern Colorado at City Stadium on April 9, the Manahawkin, N.J. native earned the distinction as the first-ever goalscorer for the 2022 USL League One debutants when he netted the opening goal. The moment proved to be extra special for Vanacore-Decker who named Richmond as one of his favorite places to play in USL because of the field quality and fan support.

“I’m not too worried about joining a team midseason. Yes, I’m sure I’ll be nervous for the first couple of days but that’s normal. I have some good friends on the Kickers like Nate [Aune], Dakota [Barnathan], and Christian [Molina] which helps with the transition. I’m excited to meet the rest of the team as well. I’ve heard it’s a great group of guys.”

Experienced at every level of the USL, Vanacore-Decker played in the Premier Development League now known as USL League Two while a collegiate athlete. He first joined New York Red Bulls U-23 in 2015 before joining North County United – now known as Treasure Coast Tritons – from 2016 to 2018.

Reunited with friends and joining a side currently sitting in second place in the USL League One standings, Vanacore-Decker relishes the opportunity to push for the chance to relive the successes he experienced in 2021.

“Personally, I’m going to try and score and assist as many times as I can,” Vanacore-Decker said. “It’s easier said than done but that’s my goal. As a team, winning the regular season and the championship is the main goal. I was lucky enough to do it last year and it was a great feeling. I can’t wait to get started and be a part of adding new history to this historic club.”

The newly-minted Kicker joins the team as they prepare for an extended road trip that begins in Fresno, Calif. for the first-ever matchup with Central Valley Fuego FC on Saturday, July 23 before flying back to the east coast to face North Carolina FC in Cary, N.C. on Wednesday, July 27. Vanacore-Decker will then have the opportunity to face his former team, Hailstorm FC, on Tuesday, Aug. 2, when the Kickers make their first-ever trip to Windsor, Colo.