USL League One Team of the Week – Week 16

TAMPA, Fla. – USL League One today announced the Team of the Week for Week 16 of the 2022 regular season with Greenville Triumph SC forward Jacob Labovitz named Player of the Week.

Since scoring his first professional goal on May 28, the first-year professional has exploded for a league-high 10 goals thanks in large part to a spectacular five-score Week 16 that set the record as the most goals scored by a single player in one week in league history. Now leading the Golden Boot race, Labovitz’s quick ascension has helped Greenville maintain its position atop the league table.

Greenville started the week with a thrilling 5-5 draw with South Georgia on Wednesday to record both the club record for most goals scored in a single match and league record for combined goals scored. Labovitz stood out as one of two Triumph SC players to record a brace and an assist.

Continuing his impressive debut season, Labovitz guided Greenville to a 3-1 win over Richmond on Saturday with his first professional hat trick. Labovitz’s three-goal outing is just the second time in league history that a first-year professional recorded a hat trick and the first since Ricardo Pepi tallied a hat trick in North Texas SC’s inaugural match on March 30, 2019.

While Greenville lead all clubs with three players named to the Team of the Week, Forward Madison FC and South Georgia Tormenta FC each placed two on the weekly list. In total, seven clubs see representation on Week 16's Team of the Week. 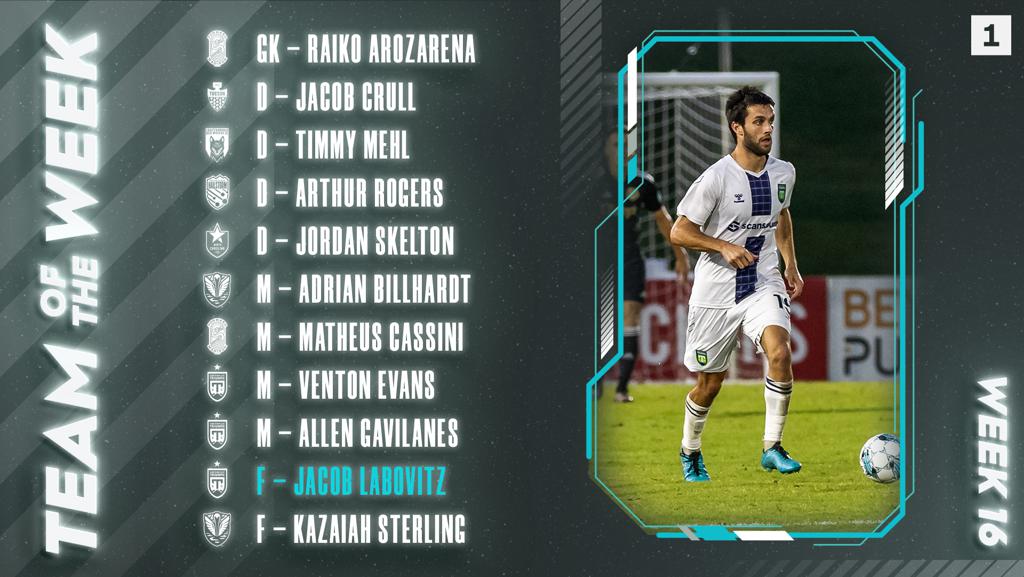 GK – Raiko Arozarena, Forward Madison FC: In his first appearance with Madison since joining on loan from Tampa Bay, the Cuban shot-stopper recorded five saves, a clean sheet and the highest saves per 90 minutes mark of Week 16.

D – Jacob Crull, FC Tucson: Crull notched his second goal of the season and third of his career in Tucson’s last-minute loss to Omaha. The Austrian-born defender won eight of 10 ground and aerial duels, recorded three tackles and tallied two clearances against his former club.

D – Arthur Rogers, Northern Colorado Hailstorm FC: Recording his career-best fifth assist of the season in a win against Charlotte, Rogers created a week-high 11 chances created and tallied eight recoveries, four clearances and dished out 14 corner kicks all while recording the highest passing score of the week according to American Soccer Analysis.

M – Adrian Billhardt, South Georgia Tormenta FC: In a one draw, one loss week for Tormenta FC, Billhardt contributed with one goal, one assist and nine chances created. The German midfielder also completed nearly 80% of his passes while recorded five recoveries and two fouls won.

M – Matheus Cassini, Forward Madison FC: Cassini recorded a goal and an assist in the same match for the second time in less than a month on Saturday against Tormenta FC. The Brazilian winger contributed to both goals in Madison’s 2-0 win and also won a trio of fouls.

M – Allen Gavilanes, Greenville Triumph SC: During a four-point week for Greenville, Gavilanes netted one goal and dished out one assist across 119 minutes of action. The 22-year-old winger also created three chances and notched four recoveries.

F – Jacob Labovitz, Greenville Triumph SC: Triumph SC’s breakout star continued his rise to the top of the Golden Boot race with an incredible five-goal, one-assist week in just 148 minutes of play. Labovitz led Greenville to a Week 16 draw and win with a brace against Tormenta FC and a hat trick against the Kickers.

F – Kazaiah Sterling, South Georgia Tormenta FC: Sterling registered his first brace for Tormenta FC in South Georgia’s record-breaking 5-5 draw with Greenville on Wednesday. Across a pair of matches, the Londoner ripped off 10 shots, completed 80% of his passes and won a penalty.