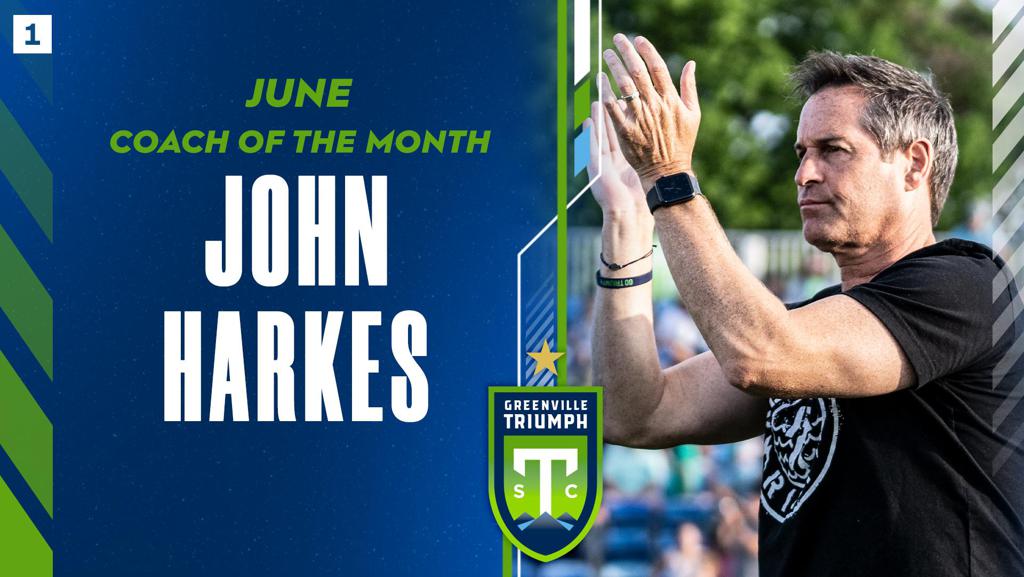 TAMPA, Fla. – USL League One today announced that Greenville Triumph SC’s John Harkes has been named the League One Coach of the Month for June. Continuing to climb up the standings, Harkes led Greenville to the top of the table and accumulated four wins in June – a mark tied for the most in the league.

"I'm really happy; this award is never about one guy - it's about the coaching staff as a whole and also serves as a reflection of how well the players and the staff are communicating and all doing our jobs at the moment," Harkes said. "I've seen a commitment to getting better, finding solutions in the game. Every year we recognize that there's gonna be some things out of your control whether it be injuries, schedule, travel, fitness levels - things like that, but at this point in the year things start to come together and our guys are showing great responsibility and accountability - both from a team standpoint and an individual standpoint."

Greenville started the month with a resounding 2-0 victory over the Independence at home. After narrowly falling to Madison, Greenville avenged its 2021 USL League One Final loss to Union Omaha with a 2-0 victory in Papillion. Harkes' squad closed out the month with a pair of strong victories, downing Northern Colorado 2-1 before besting North Carolina 3-1 in the club's final match of the month.

A steady, consistent June saw Harkes' side outscore opponents 11 to five while scoring at least twice in each of their five June fixtures. Unsurprisingly, Greenville's potent offensive unit racked up 30 more shots than their opposition. More surprisingly, however, is that in each of Greenville's four June victories, Triumph SC were outpossessed by an average margin of 60% to 40%, yet Harkes was able to guide his side to victories in each of those contests.

"We're really seeing the players have those difficult conversations with each other rather than solely relying on the coaching staff," Harkes said on what's led to the group's recent growth. "Something that you always want as a coach is to see your players be able to do that. The players play through the mistakes, and they’re supporting and encouraging each other when they need to - but they're also calling each other out when players need to work harder.

"It's been great seeing this team grow together and have trust in each other," Harkes added. "We're really happy about it but we're not settled or getting complacent because it’s a battle every day and every week. The league is going to get more difficult as the season goes on, so we have to manage our players and work toward that common goal."

Harkes was selected as League One’s Coach of the Month by the USL League One Technical Committee.