TAMPA, Fla. – USL League One today announced the Team of the Week for Week 15 of the 2022 regular season with South Georgia Tormenta FC midfielder Gabriel Cabral named Player of the Week. A week after scoring his first professional goal in match-winning fashion, the Brazilian midfielder provided a goal and an assist to propel Tormenta FC to a 2-1 win over Chattanooga Red Wolves SC.

South Georgia vaulted up the League One table to third overall as its first home victory of the season came against Chattanooga on Saturday. In a match controlled by the Red Wolves for most of the 90 minutes, Tormenta FC made the most of its chances. The breakthrough came in the 37th minute as Jamil Roberts converted a well-placed Gabriel Cabral cross into a goal. After conceding the equalizer in the 45th minute, Cabral came through again, tapping in a Kazaiah Sterling ball in the 81st minute to seal the victory.

“Winning Player of the Week means a lot because it was our first win at home on a very tough day for Tormenta Nation,” Cabral said on Monday. “I’m honored to score the game-winning goal and glad that football brought us together when life got hard.

“Now that we won at home, we won’t let results get away anymore,” Cabral added. “Goalkeeper Pablo Jara received the Player of the Week honors last week, and it shows that we are doing things correctly and trusting the process that the coaching staff has set for us. We have a very passionate team, and we work so hard day in and day out to achieve the highest goals we have for ourselves this year.”

In a diverse Team of the Week, nine of the 11 teams in action in Week 15 placed a representative on the weekly list. South Georgia Tormenta FC and Forward Madison FC place two each on the Team of the Week after a pair of 2-1 victories, respectively. 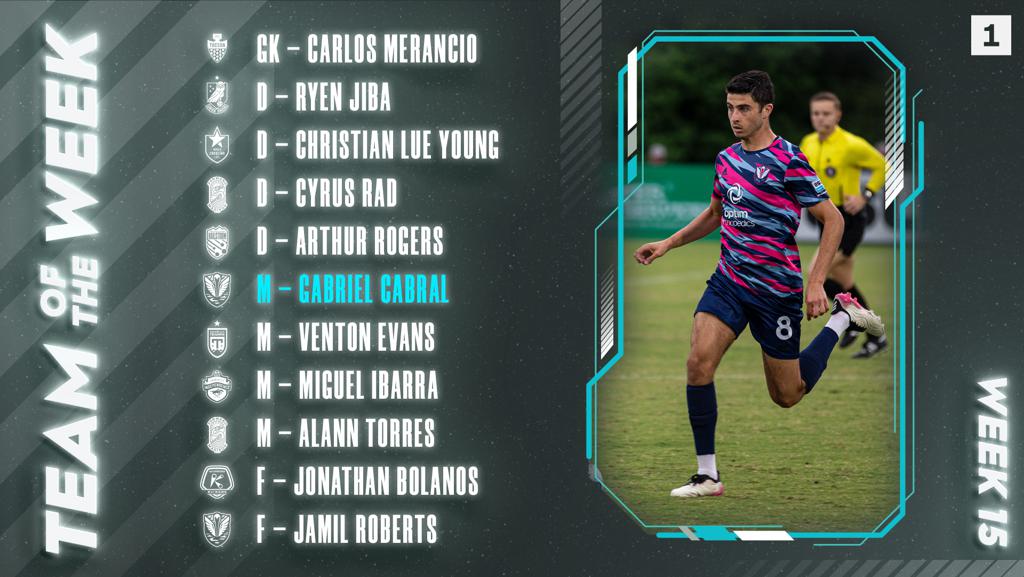 D – Ryen Jiba, Union Omaha: In his first professional season, the 21-year-old South Sudanese defender recorded the second assist of his professional career and totaled two chances created, four clearances and won 77% of his ground and aerial duels in Omaha’s 1-1 draw with NCFC.

M – Gabriel Cabral, South Georgia Tormenta FC: Graduating from Tormenta FC 2 over the offseason, the 25-year-old Brazilian was the only player to record both a goal and an assist in the same match in Week 15. The first-year pro assisted Jamil Roberts’ opening score before netting the match-winner in the 81st minute against the Red Wolves.

M – Venton Evans, Greenville Triumph SC: Coming on at the half, Evans proved to be the difference-maker in a defensive stalemate between Greenville and Central Valley. The 24-year-old Jamaican midfielder recorded the match-winner in the 66th minute and won 100% of his tackles and 75% of his ground and aerial duels in just 45 minutes of action.

M – Miguel Ibarra, Charlotte Independence: The 33-year-old veteran netted his first score since April en route to a 1-1 draw with the Kickers. Ibarra added five recoveries, four clearances and dished out eight corner kickers while completing 90% of his passes.

M – Alann Torres, Forward Madison FC: Torres became the youngest goalscorer of the 2022 League One campaign when the 18-year-old Indy Eleven loanee scored his first professional goal in the form of a 44th-minute match-winner for Madison against Northern Colorado on Tuesday.

F – Jonathan Bolanos, Richmond Kickers: Bolanos was already leading the league in assists entering Week 15 and the 24-year-old attacker added to his total by providing a helper on Owayne Gordon’s match-tying goal in the 68th minute. In addition to creating a pair of chances, Bolanos grabbed seven recoveries and won nine ground duels.