USL League One Team of the Week – Week 14

TAMPA, Fla. – USL League One announced its Team of the Week for Week 14 of the 2022 regular season on Tuesday, with South Georgia Tormenta FC’s Pablo Jara voted the League One Player of the Week. Jara posted a six-save shutout in a 1-0 win over Central Valley Fuego FC on Saturday night, equaling the mark for most saves in a shutout this season.

Fuego FC recorded 18 total shots, but Jara made every save needed to preserve his side’s slim margin.

“It is a privilege to be USL League One's Player of the Week,” Jara said. “Our win this week was a team effort, I couldn't have done it without my team."

After picking up two wins by a combined score of 5-1, the Richmond Kickers placed four players on the Team of the Week, followed by Greenville Triumph SC with three. Tormenta FC and Northern Colorado Hailstorm FC had two apiece. 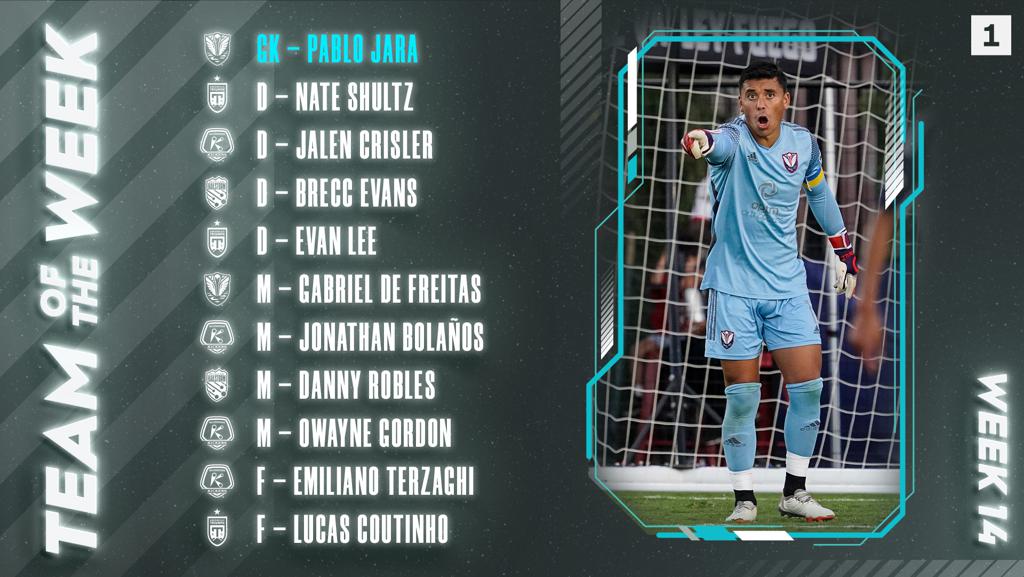 D – Jalen Crisler, Richmond Kickers: Crisler played all 180 minutes as the Kickers won twice to move to the top of the table. He recorded nine clearances, three interceptions and 13 recoveries as part of a back line that conceded just once.

M – Gabriel de Freitas, South Georgia Tormenta FC: De Freitas scored the only goal of the match, completed more than 87 percent of his passes and created a chance in a win over Central Valley.

M – Owayne Gordon, Richmond Kickers: Gordon came off the bench and added a goal and an assist in a 4-1 rout of North Carolina FC.

M – Danny Robles, Northern Colorado Hailstorm FC: Robles scored the opener and completed more than 80 percent of his passes in a win over Chattanooga.

M – Jonathan Bolanos, Richmond Kickers: Bolanos scored twice in a pair of Richmond wins this week as the Kickers climbed to the top of the table.

F – Emiliano Terzaghi, Richmond Kickers: The reigning League One MVP scored twice and had an assist in Richmond’s 4-1 win over North Carolina FC on Saturday night.