League One Player of the Month Nominees – June 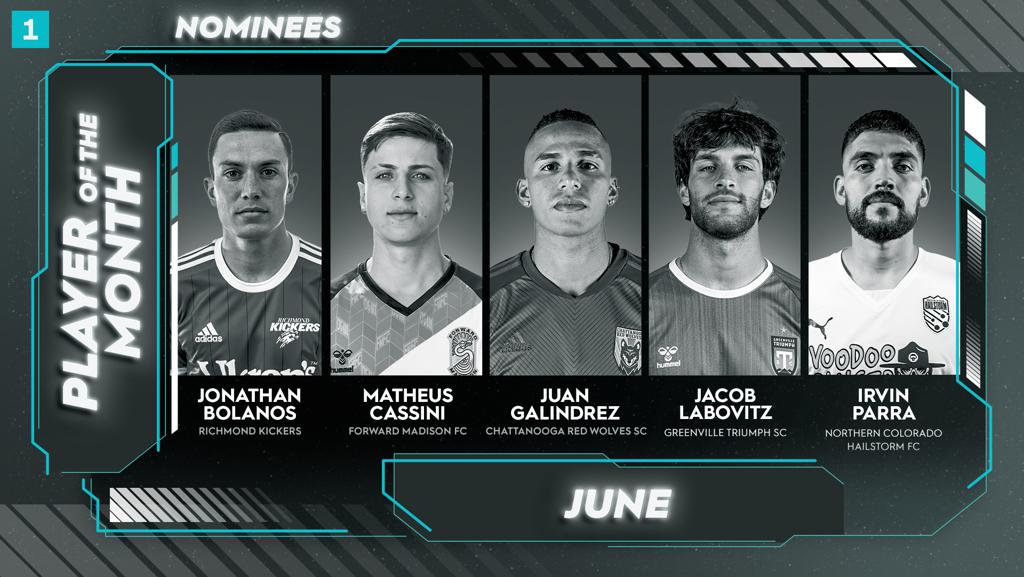 TAMPA, Fla. – USL League One announced on Wednesday the five nominees for the League One Player of the Month award for June, with top performers from the season’s first full month selected for the ballot.

Voting for the League One Player of the Month Award will be conducted by the following two voting bodies:

The award winner and complete voting results will be announced on Wednesday, July 13.

USL LEAGUE ONE PLAYER OF THE MONTH – June

Jonathan Bolanos, Richmond Kickers – Bolanos tallied a goal or an assist in all but one of Richmond’s six matches to total two goals and five assists. The 24-year-old midfielder’s three assists against the Charlotte Independence are tied for the most in a single match in League One history.

Matheus Cassini, Forward Madison FC – The Corinthians youth product had his breakout month in Madison after arriving over the offseason. The Brazilian midfielder provided the ‘Mingos with match-winning goals against Greenville and Richmond to total three goals and one assist in June.

Juan Galindrez, Chattanooga Red Wolves SC – The Red Wolves’ all-time leading scorer found the back of the net in four of Chattanooga’s six June fixtures, recording six goals in 417 minutes of action. Galindrez’s 37-minute hat trick against Charlotte was the first of the season and served as the third quickest in league history.

Jacob Labovitz, Greenville Triumph SC – In his first professional season since being named First-Team All-ACC and VaSID Player of the Year at Virginia Tech, Labovitz tallied four goals and one assist in June. In addition to recording his first professional brace against Forward Madison FC, Labovitz led the league in goals added at 1.43 goals per match according to American Soccer Analysis.

Irvin Parra, Northern Colorado Hailstorm FC – Matching his season total of three goals in the first two months of the season, Parra recorded another trio of scores in the month of June alone. Parra also added two assists and seven key passes to his impressive June.