Four-time Open Cup winners too much for League One title-holders before 18,552 at Children’s Mercy Park 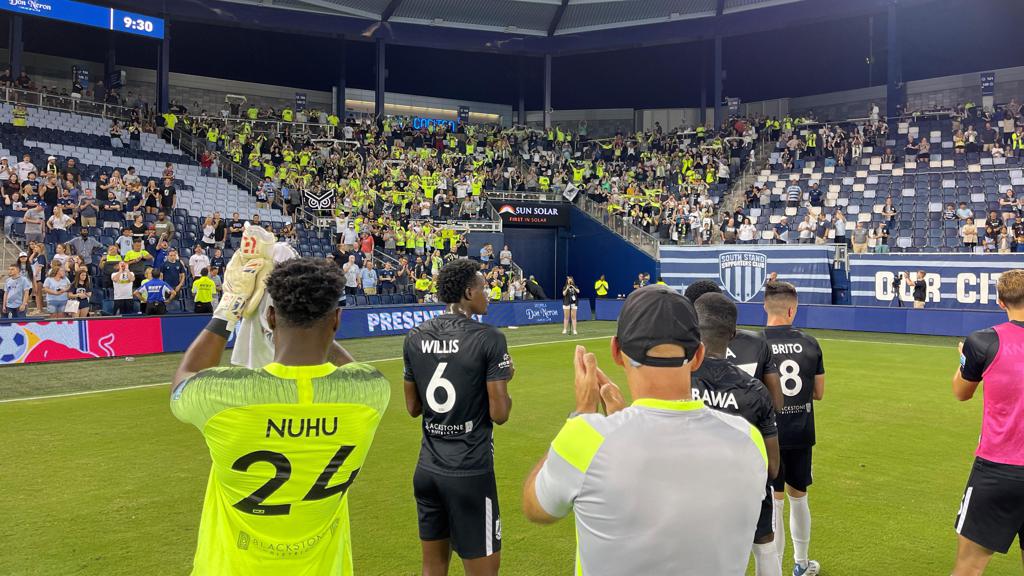 Four-time Open Cup winners too much for League One title-holders before 18,552 at Children’s Mercy Park | Image Credit: United Soccer League

KANSAS CITY, Kan. – The church bell tolled midnight on Wednesday night, ending Union Omaha’s run in the 2022 Lamar Hunt U.S. Open Cup against a Sporting Kansas City side that delivered a comprehensive performance to advance to the Semifinals with a 6-0 victory behind a pair of goals by Daniel Salloi and a goal and two assists by Khiry Shelton.

But before a crowd of 18,552 at Children’s Mercy Park, which included a large contingent of traveling support led by the Omaha Parliament, the final bow in the tournament this season for the defending USL League One title holders against its fellow Midwest club down the I-29 highway was anything but a night to forget.

"It was obviously a tough match, but the environment of the match tonight was amazing," Union Omaha Head Coach Jay Mims said. "Credit to Kansas City for packing the stadium and especially to our fans; they definitely helped with the environment and gave our guys a standing ovation at the end. I’ll always remember that. The support was amazing tonight."

A four-time winner of the Open Cup in its history, Sporting laid out its intent in just the second minute. Salloi’s speed saw him find space on the left flank for a cutback cross to Felipe Hernandez near the top of the penalty for a first-time shot that forced an outstanding save by Omaha’s Rashid Nuhu, who jabbed out his right arm to turn the shot wide. As brightly as SKC opened, though, the Owls came close to taking the lead three minutes later when Ryan Jiba’s cross from the left came through to Kemal Malcolm in the right side of the penalty area for a shot that Sporting goalkeeper John Pulskamp just managed to smother.

The combination of the quality and intent of the hosts delivered the breakthrough in the 10th minute, however, as Salloi’s speed proved decisive. Shelton was played through into the right channel by Johnny Russell, and his centering feed found Salloi as he cut in ahead of his marker to tuck home a simple finish.

A standout in Omaha’s first two seasons, Nuhu produced a trio of standout saves to keep the visitors in the game as the first half progressed, first making a diving stop to keep out Russell’s curling shot from the top-right edge of the penalty area toward the opposite corner before denying a near post effort by Salloi from the left. The save of the game denied Russell again as he crashed a header on target from seven yards out off a corner kick, only for Nuhu to parry the ball onto the crossbar before his defense cleared.

Nuhu was unable to replicate his heroics on an almost identical chance seven minutes before the break that gave Sporting its second goal of the night on a header by former San Antonio FC center back Kortne Ford. Salloi added a third and his second of the night in the 53rd minute as he cut past a pair of defenders in the left side of the penalty area before slotting home to the far corner before Shelton added another three minutes later as he used his body well to screen off his marker on a long ball upfield and slot home into the right corner.

Sporting’s fifth goal arrived midway through the second half as Marinos Tzionis’ low cross from the right took a deflection inside the penalty area where Felipe Hernandez controlled, created space and shot home into the right corner. A former finalist for the USL Championship’s Young Player of the Year award, Hernandez added his second of the night with nine minutes to go on a crisply hit finish from the top of the penalty area, rounding out the night, and sending Sporting to a date with the USL Championship’s Sacramento Republic FC in the Semifinals next month.

"We’re so lucky to have the support that we have from our fans and the players that we have on the field," Mims said. "What a special run we’ve made. Something like this probably won’t happen again for a long time."

"It’s incredible," Mims added on the success of League One in the U.S. Open Cup this year. "The league has had great success in the Open Cup this year and it just shows you that the gap between divisions can be very competitive in our sport."