USL League One Team of the Week – Week 11

TAMPA, Fla. – USL League One today announced the Team of the Week for Week 11 of the 2022 regular season with Richmond Kickers midfielder Jonathan Bolanos named Player of the Week. Bolanos dished out a record-tying three assists in the Kickers’ dominant 4-0 victory over Charlotte.

In Richmond, 20-year-old Ethan Bryant opened the scoring early after a Derrek Chan mishap near goal led to a perfect service from Jonathan Bolanos. Again finding success on the left side, Bolanos fired in a cross that Matthew Bentley redirected nicely into the back of the net to double the Kickers lead. The final two Kicker goals would see Bryant and Bentley complete their braces with Bryant hammering in another Bolanos pass into an empty net and Bentley heading in a deflected Bolanos cross.

“It’s a huge confidence booster after being out for a month,” Bolanos said. “I think being back, I've been feeling quick, I've been feeling normal. Being in the right areas and being aggressive, doing as much as I can to help the team in the attack, it felt good to me.”

The Kickers’ emphatic victory serves as the second consecutive win over the Independence for the first time in the pair's seven-year series history. With the win, the Kickers tied the League One record of two players with a brace in the same match, and, individually, Bolanos tied the league record of three assists in a single match. By the conclusion of the match, Richmond reestablished itself at the top of the league table and as the league's highest-scoring side.

“We're all in it together,” Head Coach Darren Sawatzky said after the match. “We talk about it every day. It doesn't matter who plays. There were different guys that got opportunities tonight, and we're all in it to make sure we win games. If everyone is willing to defend and keep teams off of the scoresheet, we'll win more games.”

In a goal-filled Week 11, all but three field players recorded a goal or assist and three tallied a brace. Richmond, Northern Colorado and South Georgia all see multiple representatives placed on the list, while Chattanooga, Madison, Omaha and Tucson have one player featured on the Team of the Week. 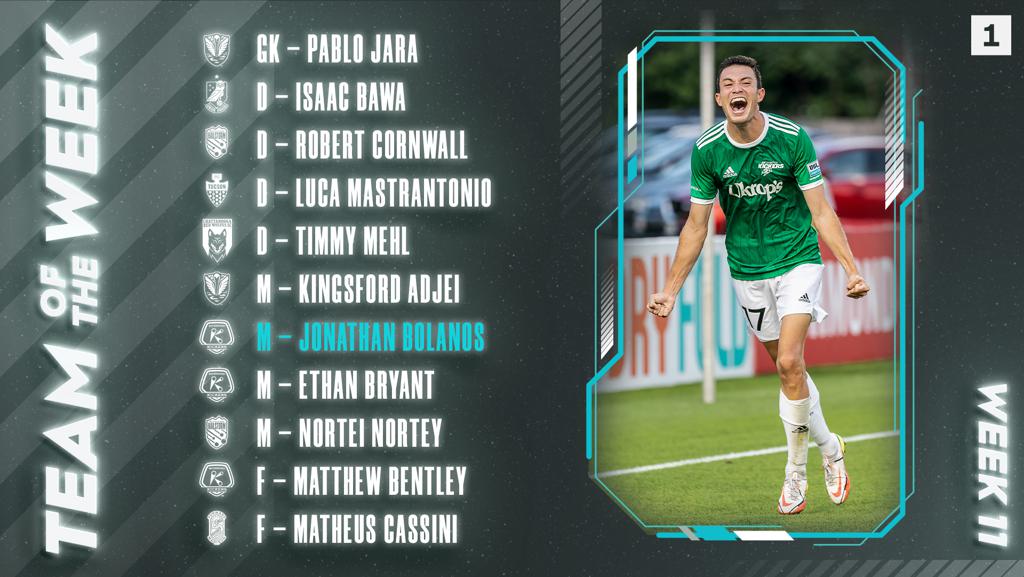 GK – Pablo Jara, South Georgia Tormenta FC: Jara recorded three saves and denied a Northern Colorado penalty in Saturday’s 1-1 draw in Greeley. Jara nearly had his fourth clean sheet of the season if not for an unlucky deflection that gave the Hailstorm their equalizer nine minutes into stoppage time.

D – Robert Cornwall, Northern Colorado Hailstorm FC: Across two 1-1 draws in Greeley, Cornwall completed 84% of his passes, 100% of his tackles and 100% of his dribbles all while recording 11 recoveries, six clearances and five interceptions.

D – Luca Mastrantonio, FC Tucson: Mastrantonio had an efficient night at Kino North Stadium, completing 93% of his passes, winning 100% of his tackles and ground duels and won a trio of fouls.

M – Kingsford Adjei, South Georgia Tormenta FC: Adjei scored his second goal of the season on Saturday and added to his strong outing with a chance created, four recoveries and two fouls won.

M – Jonathan Bolanos, Richmond Kickers: In one of the most impressive matches of his three-year professional career, Bolanos tallied a league-record-tying three assists and created five chances, including the play that led to the Kickers’ fourth and final goal.

M – Ethan Bryant, Richmond Kickers: Already having one of the best seasons of his young career, Bryant recorded his first professional brace just 10 days after recording the first multi-assist match of his career. Bryant also earned eight recoveries and created a quartet of chances.

F – Matheus Cassini, Forward Madison FC: Cassini nearly singlehandedly propelled Madison to its unlikely victory over Greenville with his first professional brace. In addition to forcing an own goal, the Brazilian completed nearly 80% of his passes and registered five recoveries and two fouls won.