Bradford's NCFC earned most wins, points across league in May 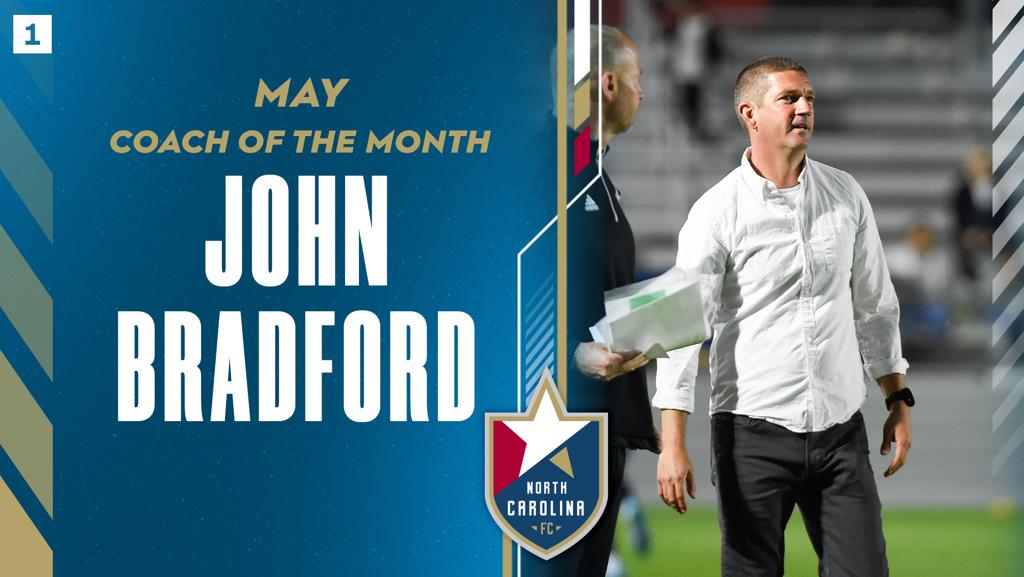 TAMPA, Fla. – USL League One announced today that North Carolina FC’s John Bradford has been named the League One Coach of the Month for May. Accumulating the most wins and most points of the month, Bradford’s North Carolina FC went 3-1-0 in May to vault up the table to second place following wins over FC Tucson, Greenville Triumph SC and the Richmond Kickers.

“I’m proud of the progress our team has made over the course of our last four matches,” John Bradford said. “Our group is determined to keep improving. I share the Coach of the Month recognition with all our staff and players, as this is also a reflection of their dedication and hard work.”

In its first match of the month, NCFC overcame a one-goal deficit to stun FC Tucson in stoppage time. The equalizer came from Jaden Servania with just over 20 minutes to play, and the dagger came from a converted Oalex Anderson penalty in stoppage time. In their second match of May, Bradford’s boys were able to again overcome a one-goal deficit to level the match against Tormenta FC, but a late error led to the South Georgia winner.

In the final two matches of the month, North Carolina secured impressive victories over a pair of contenders in Greenville Triumph SC and the Richmond Kickers. Thanks to Luis Arriaga’s first goal of the season, NCFC claimed its first-ever victory over Greenville on May 21 before rounding out the month with a 2-1 win over the Kickers via a Garrett McLaughlin brace.

Bradford was selected as League One’s Coach of the Month by the USL League one Technical Committee.