USL League One Team of the Week – Week 8

TAMPA, Fla. - USL League One today announced the Team of the Week for Week 8 of the 2022 regular season with Central Valley Fuego FC forward Villyan Bijev named Player of the Week for the second time this season. Bijev recorded his third brace across all competitions on Saturday to blow by Tormenta FC and see Fuego FC vault up the table to second in the league.

Continuing its scorching hot start to its first-ever season, Fuego FC have gone unbeaten in six of seven league matches to begin the season. In Statesboro, Victor Falck opened the scoring early, tapping in a low Cherif Dieye cross across the face of the goal before Jordan Chavez headed in a corner kick just five minutes later. Rounding out the first half, Villyan Bijev netted a seven-minute brace to put the match away and confirm the resounding Central Valley victory.

“This is a hard place to travel to and play," said Villyan Bijev after the victory over Tormenta FC. "As a team, we wanted to make no excuses and go out and play the game to the best of our ability. We were able to play to our strengths and put together a great performance.”

“The group was rewarded with a great performance, a great result, and we have to continue to build on performances like today,” Head Coach Martín Vásquez added. “It’s a long season, but the opportunity was there today. We all knew what was at stake, and we embraced the opportunity."

Fuego FC’s four-goal win sees the club place five on the Team of the Week, trailed by three NCFC players following the latter’s 1-0 victory against Greenville. In total, five clubs placed a representative on the weekly list. 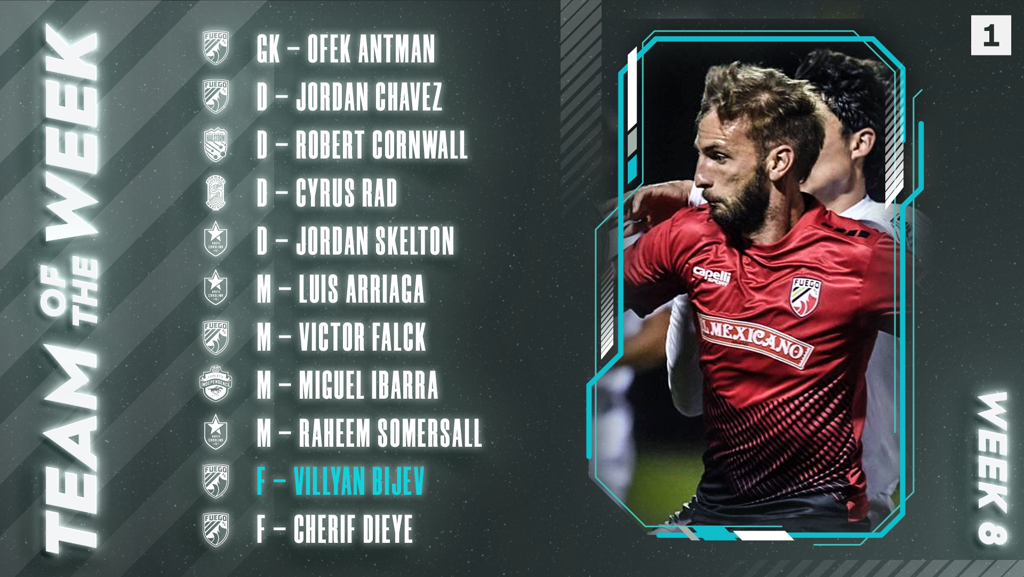 GK – Ofek Antman, Central Valley Fuego FC: Now tied for the most clean sheets in the league with three and second most saves with 17, Antman recorded five saves in a shutout victory over Tormenta FC.

D – Cyrus Rad, Forward Madison FC: Rad picked up his first assist of the season and maintained 91% passing accuracy while completing 75% of his long balls.

M – Victor Falck, Central Valley Fuego FC: Falck recorded his second goal in as many matches as the Swede stifled the Tormenta FC attack with six recoveries, five clearances and a pair of interceptions.

M – Raheem Somersall, North Carolina FC: A strong defensive performance from the midfielder, Somersall contributed to the NCFC victory with 13 recoveries, three clearances and won 100% of his aerial duels.

F – Villyan Bijev, Central Valley Fuego FC: Registering his second league brace of the season, Villyan Bijev converted a pair of chances into goals to contribute to Fuego FC’s record victory. Bijev’s brace was his third of the season across all competitions and 10th in his decade-long career.