USL League One Team of the Week – Week 7

TAMPA, Fla. - USL League One today announced the Team of the Week for Week 7 of the 2022 regular season with Greenville Triumph SC midfielder Aaron Walker named Player of the Week. Extending the Triumph SC unbeaten streak to three, Walker tallied a goal and an assist in Greenville’s 2-0 victory over Forward Madison FC on Friday.

In its highest-scoring match of the season, Triumph SC recorded 19 total shots to FMFC's four with six of those landing on target. A pair of perfect combinations between midfielders Allen Gavilanes and Aaron Walker resulted in a pair of Triumph SC goals. Walker opened the scoring in the 28th minute, tapping in a Gavilanes corner kick to grab the lead early. Shortly after, the duo connected again, as Gavilanes converted a timely pass from Walker into Greenville's second and final goal.

“These types of games like this when we dominate, it’s positive. It’s very good stuff, but we want to be able to be that team that puts a nail in it and finishes it off,” said Greenville Triumph SC Head Coach John Harkes. “I’m happy for the guys, happy for us to get a result at home like this again.”

Greenville’s convincing victory sees Triumph SC place a quartet of playmakers on the Team of the Week, while an evenly distributed list sees the remaining seven entrants hail from seven different clubs. 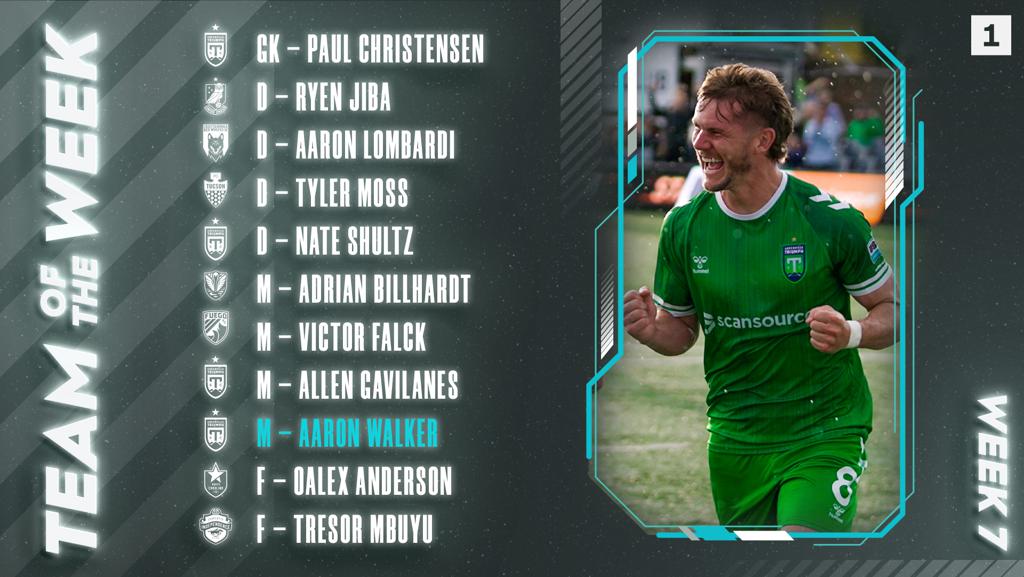 GK – Paul Christensen, Greenville Triumph SC: The only goalkeeper to keep a clean sheet on the week, Christensen stifled the Forward Madison FC attack and continued Greenville’s strong defensive start to the season.

D – Ryen Jiba, Union Omaha: The 21-year-old South Sudanese defender continues his strong start to his first professional season, as Jiba recorded an assist on the lone Omaha goal and won 13 of 18 ground and aerial duels.

D – Tyler Moss, FC Tucson: The only defender to find the back of the net in Week 7, Moss complemented his first professional goal with 90% passing accuracy and 80% long ball completion.

D – Nate Shultz, Greenville Triumph SC: The first year Triumph SC man has continued to have a positive impact on the Greenville backline. This week, Shultz tallied four clearances, three recoveries and an interception while winning 12 of 15 ground and aerial duels.

M – Adrian Billhardt, South Georgia Tormenta FC: Two weeks after scoring his first goal of the season, the Union Berlin youth product dished out his first League One assist of the season and maintained 92% passing accuracy in Tormenta FC’s victory over NCFC.

M – Allen Gavilanes, Greenville Triumph SC: Now second in the league with 12 chances created, Gavilanes earned his well-deserved first goal and assist of the season in Greenville’s victory over Madison.

M – Aaron Walker, Greenville Triumph SC: Recording a goal and an assist in the same match for the first time in his professional career, Walker also contributed to Greenville’s victory by completing 91% of his passes, 88% of his long balls and won nine of 12 ground and aerial duels.

F – Oalex Anderson, North Carolina FC: In his second consecutive match recording both a goal and an assist, Anderson nearly led NCFC to victory in his third straight match scoring.

F – Tresor Mbuyu, Charlotte Independence: Mbuyu found the back of the net for the first time since April 17 in Charlotte's victory on Sunday evening. The Congolese forward also added to Charlotte's victory with six recoveries, three shots and one chance created.