USL League One Team of the Week – Week 6

TAMPA, Fla. - USL League One today announced the Team of the Week for Week 6 of the 2022 regular season with Forward Madison FC goalkeeper Philip Breno named Player of the Week. Earning the ‘Mingos their first victory of the season, Breno recorded a week-high five saves against the top-of-the-table Kickers.

FMFC spoiled the Kickers' anniversary celebrations by securing the first win of its season with a 1-0 victory at City Stadium in the Henny Derby. Breno recorded three tough saves early in the match to keep the Kickers’ offensive unit at bay before turning it on late, recording two vital saves in stoppage time. Breno palmed the ball away following a Richmond free kick in the fifth minute of stoppage time before securing the match-saving denial two minutes later, diving to stop a point-blank Richmond header.

"After last week's mistake, this week was filled with a lot of self-doubt and anxiety," Breno admitted. "I tried going into this match as level-headed as I could; I just wanted to focus on being as solid as I could out of the back. To come out with a clean sheet, the first win of the season and Player of the Week honors just showed me that one mistake shouldn't define anyone as a player or person. I'm so grateful to have been recognized for my performance this week, but even more grateful for the lessons I've learned."

Elsewhere, Chattanooga see four Red Wolves placed on the weekly list thanks to a four-goal performance, and three North Carolina FC players earn the nod thanks to their last-minute victory in Tucson. Forward Madison FC place two on the list, while South Georgia Tormenta and the Richmond Kickers each have one representative. 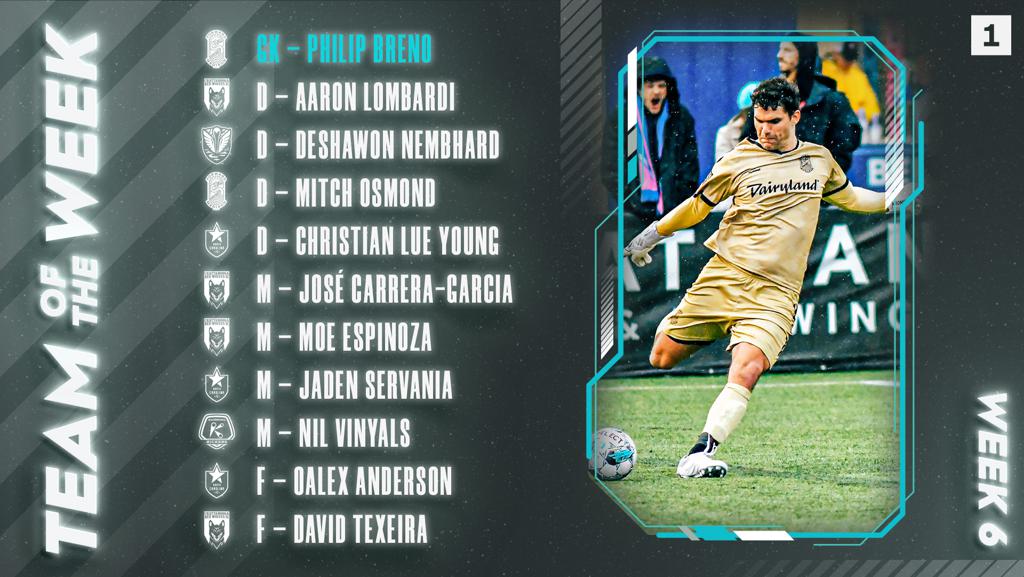 GK – Philip Breno, Forward Madison FC: Earning a clean sheet and first Forward Madison FC victory, Breno led all goalkeepers with five saves on the week with a number of those coming in a crucial period late in the match.

M – José Carrera-Garcia, Chattanooga Red Wolves SC: Carrera-Garcia recorded his first goal of the season on a nifty free kick from outside the penalty area. The 26-year-old Mexican also won 12 of 17 ground and aerial duels, three tackles and four fouls.

M – Moe Espinoza, Chattanooga Red Wolves SC: The league’s assist leader, Espinoza recorded a pair of assists in a single match for the second time this season, guiding Chattanooga to its 4-1 victory.

M – Nil Vinyals, Richmond Kickers: If not for a strong performance from Breno and the FMFC defense, Vinyals may have had another big day as the Spaniard dished out five key passes, had three shots blocked and recorded the second highest passing score of the weekend.

F – Oalex Anderson, North Carolina FC: Continuing his impressive start to the season, the Saint Vincent and the Grenadines international recorded the first match in his career in which he tallied both a goal and an assist.

F – David Texeira, Chattanooga Red Wolves SC: After a slow start to his Chattanooga career, the Uruguayan veteran finally broke through in a big way with his first brace since February 2018.