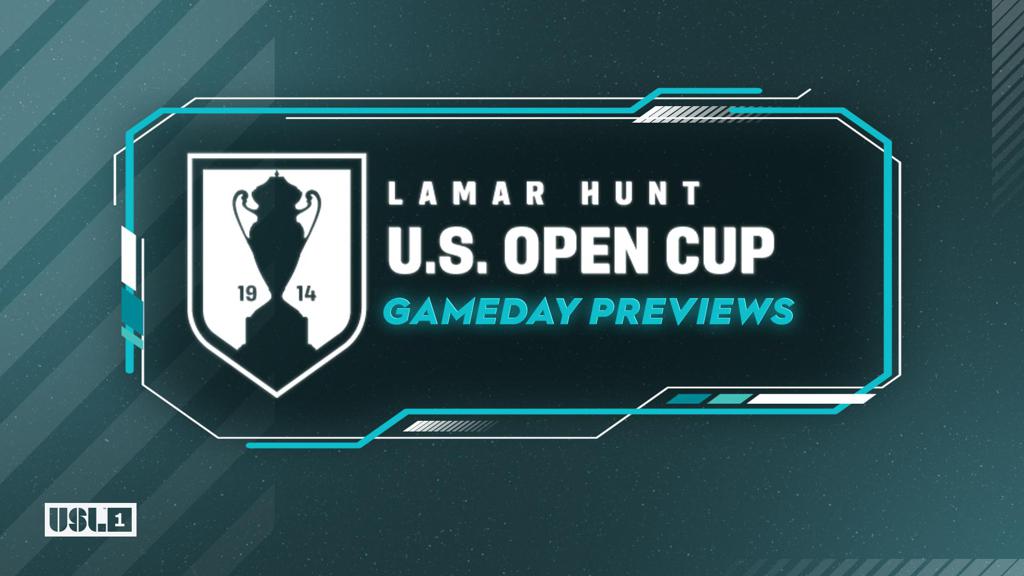 TAMPA, Fla. - A historic Third Round of the Lamar Hunt U.S. Open Cup will kick off tonight with a record eight USL League One clubs among the 48 competing for a spot in the Round of 32. With the addition of 17 Major League Soccer clubs in this round, four League One clubs will become the first batch to ever face off against the country's top-flight league in competitive play.

On the docket for tonight is a trio of unique matchups featuring League One clubs facing off against USL Championship, MLS and NISA opposition.

The first-ever meeting between the pair of southeastern adversaries will see either Legion FC or Tormenta FC advance to the Round of 32 – the farthest either side has ever progressed in their short histories.

Birmingham arrives in the Third Round after a 3-1 victory over NPSL side Southern States SC, while South Georgia took down the Charleston Battery to earn its first win over a USL Championship club in its history. Both sides are struggling in league play as of late with the 11th-place Legion FC winning just once in its last six contests and Tormenta FC still searching for its first league win of the young 2022 season.

South Georgia Tormenta FC - Jake Dengler: New signee Jake Dengler has proven to be tough for opponents to get past, accumulating 11 clearances, 13 of 19 ground duels won and 11 of 15 aerial duels won.

One of four over the next 48 hours, the first-ever competitive matchup between a current USL League One club and a Major League Soccer club will see the reigning League One champions take on a U.S. Open Cup power at Soldier Field.

Chicago's stout defense has led the MLS original to a 2-1-4 start to the season, but despite the offseason additions of Kacper Przybyłko and Xherdan Shaqiri, the Fire have accumulated the fewest goals in MLS thus far, scoring just five in seven matches. Omaha itself is still searching for goals, as the reigning champs have just two through two matches. Union Omaha is fresh off its first U.S. Open Cup victory after downing USL League Two champion Des Moines Menace in Omaha.

Chicago Fire FC - Kacper Przybyłko: One of a handful of Polish playmakers in MLS, Przybyłko joined the Fire in the offseason following a very successful three years with the Philadelphia Union in which he claimed a Supporters' Shield and scored 40 goals in 96 matches with the Union. Przybyłko leads the Fire this season with a pair of goals.

Union Omaha - Conor Doyle: The MLS veteran will face the Fire for the first time since 2015 against whom he maintains a 4-1-1 record. So far this season, Doyle has contributed to Omaha's unbeaten start with an assist and five chances created as he looks to score his third goal against the Fire on Tuesday.

NISA's California United Strikers FC will travel down I-10 to face FC Tucson in both clubs' first competitive matchup with the opposition's league. Already tying its best finish to the tournament in club history, Tucson advanced to the Third Round of the U.S. Open Cup with an impressive 3-2 win over USL Championship's Las Vegas Lights FC. Cal United Strikers, on the other hand, took down UPSL side San Fernando Valley FC in the Second Round of the competition.

Although winless in league play, FC Tucson have gone 5-2 all-time in U.S. Open Cup play at home and look to extend that margin against the visitors. While yet to give up a goal in competitive play this season, Cal United Strikers have struggled to score goals in league play, starting the 2022 season with a pair of scoreless draws before defeating the LA Force 2-0 three days ago to position itself at second in NISA's West Division.

FC Tucson - Louis Perez: The former Paris Saint-Germain youth and USL Championship midfielder has already proven himself to be an important part of Tucson's offense. The Frenchman leads Tucson in assists, chances created and shots on target.

California United Strikers FC - Kevin Garcia-Lopez: The former Las Vegas Lights FC defender is back for his third stint with the Strikers and has contributed to his side's impressive mark of zero goals allowed in competitive play so far this season.