USL League One Team of the Week – Week 3

TAMPA, Fla. – USL League One today announced the team of the Week for Week 3 of the 2022 regular season with Charlotte Independence midfielder Tresor Mbuyu named Player of the Week. Mbuyu recorded a goal and an assist in Charlotte’s 2-1 win over Northern Colorado Hailstorm FC to extend the league newcomer’s unbeaten start to the season.

The match at American Legion Memorial Stadium began with a converted Hailstorm penalty in the 7th minute, but the Independence quickly responded with Miguel Ibarra knocking in a pass from Tresor Mbuyu in the 14th minute. The difference came from a costly Northern Colorado turnover at the beginning of stoppage time which was pounced on by Quinn McNeill and tapped on to Mbuyu for the late winner. Following his Week 3 performance, Mbuyu is now tied for the league lead in goals and assists.

“The feeling is hard to explain. There’s just so much excitement going through me and my teammates,” said Mbuyu after the match. “It feels good to get the first home win; drawing the first game was hard. Everything just worked well in this game. Everybody was on point, and it just feels good.”

In addition to Charlotte’s three, FC Tucson placed a pair of defenders on the Team of the Week following its first point of the season, and Chattanooga Red Wolves SC saw two players earn the recognition after leapfrogging the Richmond Kickers at the top of the table. In total, seven clubs placed a player on this week’s list. 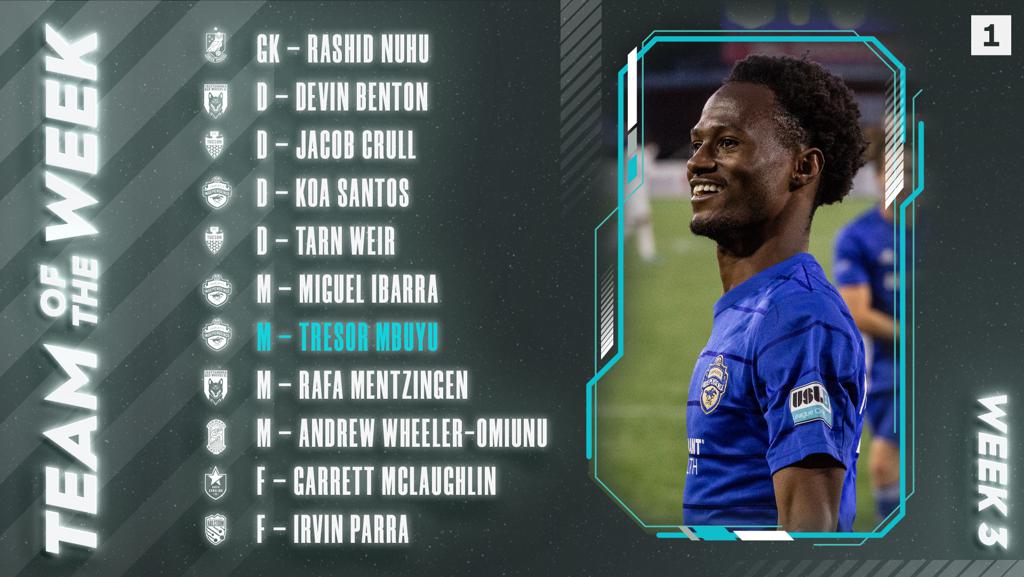 D – Jacob Crull, FC Tucson: In his second league match with FC Tucson, the 24-year-old center back scored his first professional goal in the final minutes of the match to secure an impressive draw for Tucson in its home opener.

D – Koa Santos, Charlotte Independence: In his first match after being loaned from Major League Soccer’s Charlotte FC, the 22-year-old Hawaiian defender put in a 90-minute shift, completing 90% of his passes, nine of 10 long balls and won seven of eight ground duels.

D – Tarn Weir, FC Tucson: The second FC Tucson defender to have a strong showing in his side’s home opener, Weir won three of three tackles, seven of eight ground duels and a trio of fouls.

M – Miguel Ibarra, Charlotte Independence: The veteran midfielder scored his first League One goal while also completing 93% of his passes, 75% of his long balls and 100% of his ground duels in 81 minutes played.

M – Tresor Mbuyu, Charlotte Independence: Mbuyu continued his strong start to the season as the Congolese midfielder was involved in both of Charlotte’s goals; scoring one and assisting on the other.

F – Garrett McLaughlin, North Carolina FC: Tied for the league lead in goals so far, McLaughlin seems to be a promising addition to NCFC as the 6-foot-tall striker scored the equalizer in a 1-1 draw with Greenville in Cary.

F – Irvin Parra, Northern Colorado Hailstorm FC: The veteran attacker won and converted a penalty within the first ten minutes of his side’s match in Charlotte while also completing 100% of his shots, dribbles and long balls.