USL League One Team of the Week – Week 2

TAMPA, Fla. - USL League One today announced the Team of the Week for Week 2 of the 2022 regular season with Central Valley Fuego FC midfielder Villyan Bijev named Player of the Week. Bijev knocked in a pair of late scores to stun the Independence and salvage a draw, extending the expansion side’s unbeaten streak to begin the season.

Central Valley Fuego FC’s hot start to the season was in jeopardy of being extinguished as the Independence leapt out to a 2-1 lead in the 41st minute thanks to an early Tresor Mbuyu brace. 40 minutes later, however, Bijev came up big to head home a flicked-on corner kick from Renato Bustamante to level the match. Despite Shalom Dutey’s 89th-minute goal, Bijev answered with a stoppage-time stunner, chipping in a deflected ball over Charlotte's goalkeeper, placing it perfectly under the bar and above the heads of a pair of leaping defenders.

In a goal-filled Week 2, all but one field player on the Team of the Week scored or assisted in their respective matches. The Richmond Kickers and Northern Colorado Hailstorm FC placed a trio of players on the list following a 1-1 draw on Saturday, and the Charlotte Independence saw two players tabbed for the weekly honor. 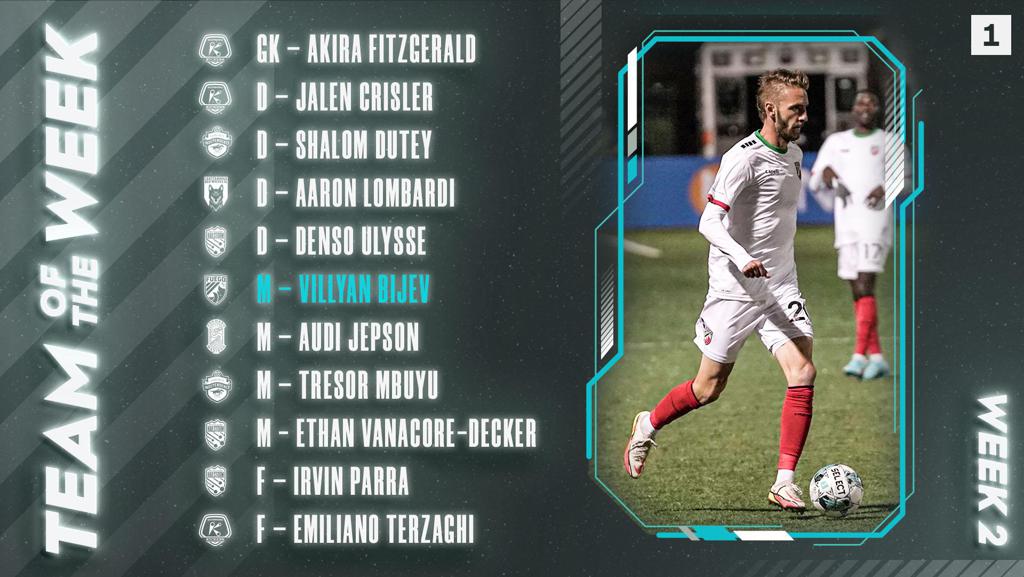 D – Jalen Crisler, Richmond Kickers: Aiding in stifling the Hailstorm attack, the second-year Kicker contributed to his side’s draw with 14 ground and aerial duels won, eight clearances while adding to the attack with an assist and pair of chances created.

M – Villyan Bijev, Central Valley Fuego FC: The veteran midfielder earned Player of the Week honors in just his second week in the league, scoring twice in the final 20 minutes to stun the Independence.

M – Audi Jepson, Forward Madison FC: Maintaining over 80% passing accuracy, creating a trio of chances and slotting home a penalty for your first Madison goal is enough to see the second-year Flamingo earn Team of the Week honors.

M – Tresor Mbuyu, Charlotte Independence: One of the handful of Independence veterans remaining put on a show on Friday, deflecting in a Diego Rocha set piece before tapping in a perfect ball from Miguel Ibarra to earn a brace and draw against Central Valley.

M – Ethan Vanacore-Decker, Northern Colorado Hailstorm FC: In his club’s first-ever League One match, the veteran attacker scored his first goal since 2020 and completed nearly 90% of his passes en route to the Hailstorm’s first point of the season.

F – Emiliano Terzaghi, Richmond Kickers: Another week, another goal for the league’s all-time leading scorer. Terzaghi placed a powerful header on target in the 55th minute to earn his side a draw and extend the unbeaten start to the year.