USL League One Team of the Week – Week 1

TAMPA, Fla. - USL League One today announced the Team of the Week for Week 1 of the 2022 regular season with Richmond Kickers midfielder Nil Vinyals named Player of the Week. One of four Kickers tabbed to the weekly group following the club's emphatic victory against FC Tucson, Vinyals recorded two goals and one assist in the performance.

Starting their 30th-season celebrations, Vinyals and the Kickers put on a show for more than 4,000 fans at City Stadium on Saturday evening. Following an opening goal from Emiliano Terzaghi – the first of the 2022 League One campaign – Vinyals tucked a perfectly presented Stephen Payne ball into the left side of the net in the 34th minute. Vinyals earned his brace in the 60th minute, finishing another perfect service into the underside of the net to give Richmond a three-goal advantage. Finally, Vinyals assisted the final goal of the match with nine minutes to go, chipping a ball over a Tucson defender to find the feet of Matt Bentley, who converted the chance.

"It's really exciting," said Richmond Kickers midfielder and Player of the Week Nil Vinyals. "Those were my first two goals at City Stadium which is really exciting. I think my performance is just a result of the team's performance. I've been working with coaches Mika [Elovaara] and Darren [Sawatzky] to be in the box more – to have that killer mentality. I'm just happy to have a brace.”

Other notable entrants to the Team of the Week include a pair of Central Valley Fuego FC players in Christian Chaney – who earned the expansion side its first win on the road at Greenville Triumph SC – and Victor Falck. Additionally, five other clubs saw players placed on the list. 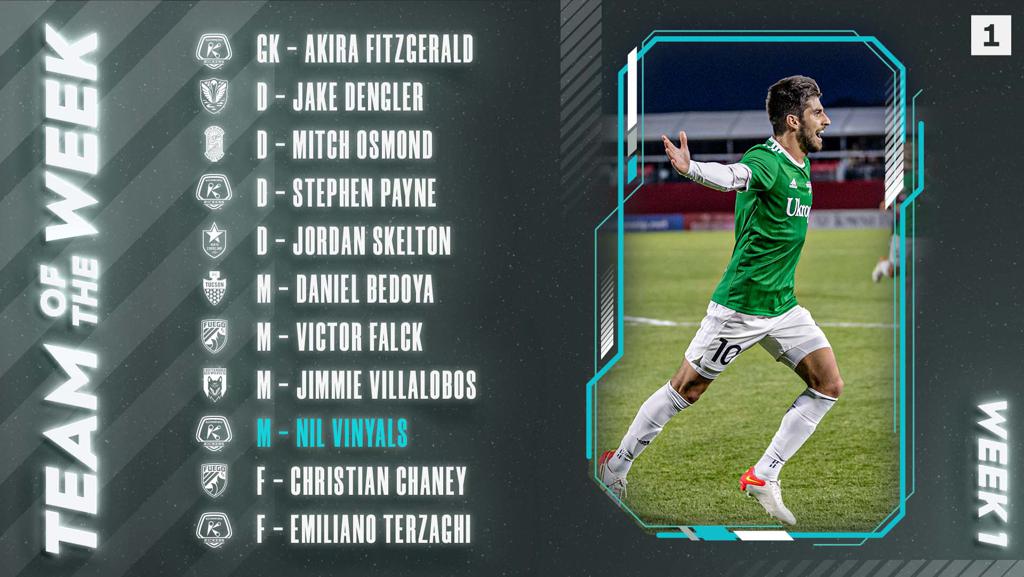 GK - Akira Fitzgerald, Richmond Kickers: The League One veteran shone in his season debut for the Kickers, accumulating six saves – the most in the weekend’s action – on the way to his first clean sheet of the year.

D - Mitch Osmond, Forward Madison FC: In a defensive match between Chattanooga and Madison, the newly acquired defender completed 57 of 67 passes, 11 of 18 long balls and won 100% of his duels.

D - Stephen Payne, Richmond Kickers: In his debut with the Kickers, Payne put in a 90-minute shift and added to his club's resounding victory with an assist while maintaining a passing accuracy rate over 70%.

M - Daniel Bedoya, FC Tucson: Despite his club's loss, Bedoya was a bright spot for the visiting side as he converted 88% of his passes, 100% of his dribbles and sent out eight accurate long passes.

M - Victor Falck, Central Valley Fuego FC: Falck put in a solid shift in the center of pitch as Fuego FC defeated Greenville, completing 75% percent of his passes and winning 80% of duels while notching two chances created and an assist.

M - Jimmie Villalobos, Chattanooga Red Wolves SC: In addition to his 40th-minute strike from outside the penalty area, Villalobos completed nearly 75% of his passes while winning 100% of his tackles and aerial duels.

M - Nil Vinyals, Richmond Kickers: The catalyst in Richmond's 4-0 victory over Tucson, Vinyals recorded his first brace since 2020 while also adding an assist on the evening.

F - Christian Chaney, Central Valley Fuego FC: One of many Fresno natives suiting up for Fuego FC, Chaney's debut match for the expansion side featured a decisive brace that earned Central Valley its first win in club history.

F - Emiliano Terzaghi, Richmond Kickers: The league's all-time leading scorer and two-time defending MVP became the league's first goalscorer of the 2022 campaign with his 18th-minute finish, spurring the Kickers onto a resounding victory.