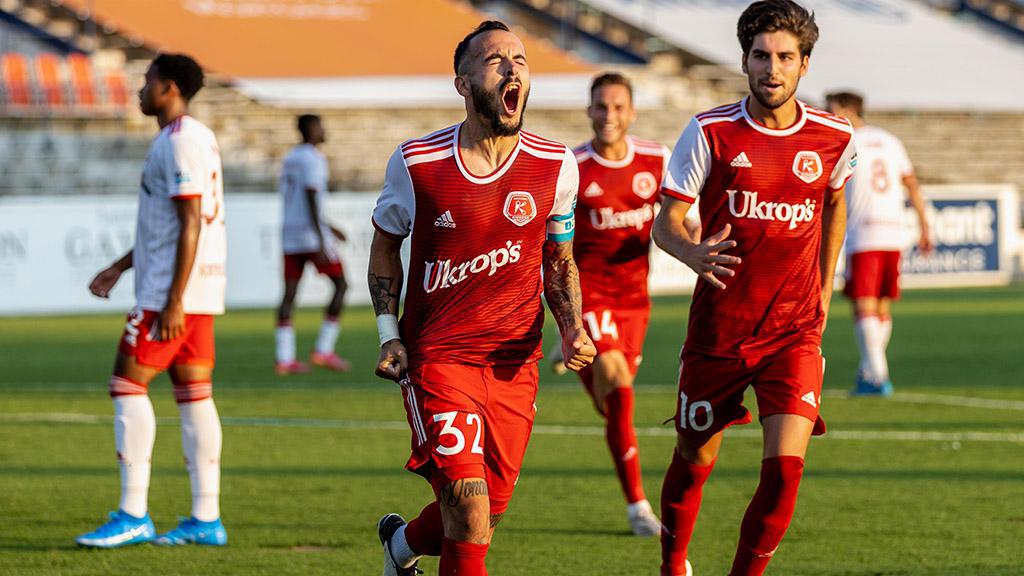 Two-time USL League One Most Valuable Player Emiliano Terzaghi will return to the Richmond Kickers for the 2022 season after recording 28 goals in his first two years at the club. | Photo courtesy Jessica Stone Hendricks / Richmond Kickers

RICHMOND, Va. – The Richmond Kickers announced on Thursday the return of two-time USL League One Most Valuable Player Emiliano Terzaghi for his third season with the club. The Argentine returns having previously been under contract for the 2022 League One season as he looks to build on consecutive Golden Boot awards as the league’s leading scorer.

“To be a league MVP and Golden Boot winner takes special talent and a hunger for the game,” said Kickers Chief Sporting Officer and Head Coach Darren Sawatzky said. “To replicate these titles two years in a row in any league takes a special person. Emiliano is aligned and synonymous with the new edition of the Richmond Kickers and having him return to the culture here to build on the past two years is amazing.

“We are excited to further our long-term plan in 2022 and Emiliano is a big piece of that project. Having Emiliano and his family with us is important as we build the long-term version of the Richmond Kickers.”

In his first two seasons in Richmond, Terzaghi has quickly ascended the ranks of the league’s leading goalscorers, recording 28 goals to sit as the all-time leader in the league’s short history. In 2021, Terzaghi twice earned Cleer Audio Player of the Month honors in July and October, and was named to the League One Team of the Week on eight occasions.

“I am very happy to stay in the club that feels like my home,” Terzaghi said. “We hope to bring joy to the fans fighting to lead the Kickers to the top of the league.”

Terzaghi served as the club’s co-captain this past campaign alongside recently-retired Kickers’ defender Ivan Magalhães as he recorded 18 goals, including six game-winners, averaging a goal every 133.4 minutes. At the most important time of the season, Terzaghi bagged four game-winners and a brace during the Kickers’ five-match winning streak late in the season that propelled the club into the USL League One Playoffs, the club’s first postseason berth since 2016.

On top of the league accolades and record-setting statistics, Terzaghi recently earned local recognition from the Richmond Region Tourism Foundation’s inaugural RVA Sports Awards. He is currently nominated for Male Athlete of the Year alongside VCU men’s basketball alumnus Na’Shon “Bones” Hyland and Sportable’s Chris Marston. The award winners will be announced at the official awards ceremony scheduled for Saturday, February 5.