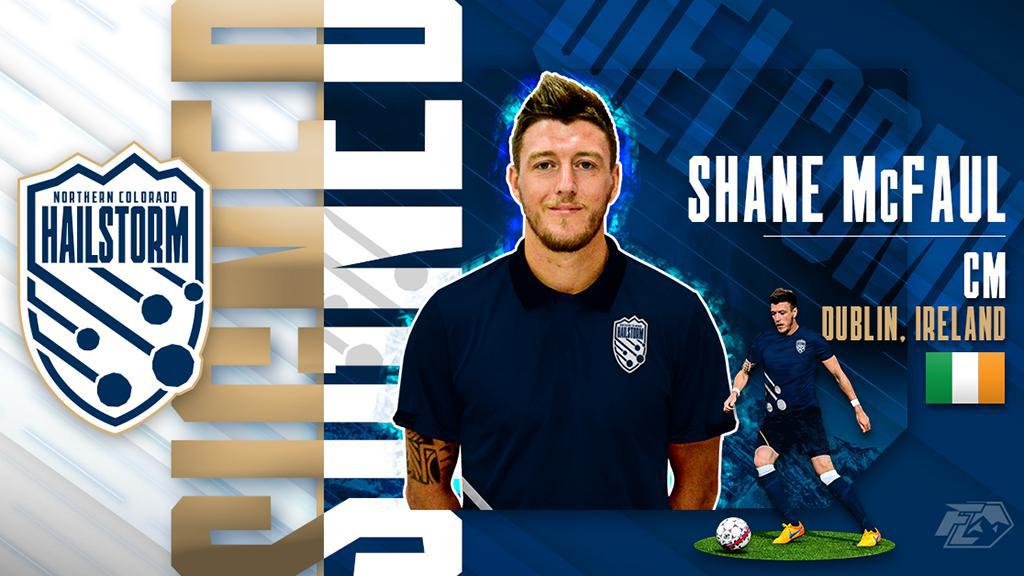 WINDSOR, Colo. – Northern Colorado Hailstorm FC announced on Friday it had signed Irish defensive midfielder Shane McFaul ahead of the 2022 USL League One season, bringing aboard a veteran whose 20-year professional career has included numerous accolades and titles, as well as multiple appearances with Republic of Ireland age group teams. The signing is pending league and federation approval.

The defensive midfielder brings a wealth of experience and a veteran presence to Hailstorm FC, having played for 11 clubs in five countries during his career. He has also completed his UEFA ‘C’ coaching license and will be undertaking his UEFA ‘B’ coaching license in 2022.

“I’ve known Shane a long time and have followed his career ever since he was with University College Dublin,” said Hailstorm FC Head Coach Éamon Zayed. “What Shane brings on and off the pitch is invaluable and hard to find. He brings a calming presence and maturity to the middle of the field, and he can dictate play. For me, without a doubt he has the best technical ability and passing range in the whole league. Off the pitch, he trains as hard as he plays, which I love and want from my players. He will only enhance the professional environment and culture for Hailstorm both on and off the pitch.”

McFaul most recently played for Sudet in Finland, his fourth club in the Scandinavian country after appearances with Mikkelin Palloilijat (2018), Kotkan Työväen Palloilijat (2014–16), and FC Haka (2012). The Dublin, Ireland native has also played professionally in Ireland, England, the United States, and India.

McFaul signed his first professional contract in 2002 at the age of 16 when he joined Notts County in England. He made his debut for the Magpies out of position at right back, and predominantly played in defense during his three seasons in Nottingham. After stints with the Virginia Beach Mariners in the United States and University College Dublin in Ireland’s Premier League, he returned to England with Brighton and Hove Albion, but after only being used sparingly he returned to Dublin and UCD.

In 2009, McFaul signed with Sporting Fingal and partnered with Zayed, the club’s striker, to help the new side earn promotion to the Premier Division. Sporting Fingal won the 2009 FAI Cup—and with it qualification for the 2010–11 Europa League—and McFaul was named the final’s Man of the Match, and later named the club’s Player of the Year.

After Sporting Fingal disbanded following the 2010 season, McFaul signed with St. Patrick’s Athletic, and earned supporter’s club Player of the Month honors in July 2011 for his exploits.

McFaul spent the 2012 season with FC Haka in Finland, before returning to Ireland in 2013 to play once again for St. Patrick’s Athletic, where he led the club to the league title.

In all, McFaul has played in 360 senior-level matches as a professional, with a further five appearances for Republic of Ireland age-group sides.

“I’m absolutely delighted and so excited to sign for Northern Colorado Hailstorm FC,” said McFaul. “From the moment I first spoke with Éamon, and what he told me about the club’s very ambitious plans for the future I couldn’t wait to sign. The facilities at the Future Legends Complex look absolutely incredible, so I can’t wait to be part of such an exciting and ambitious new club.”