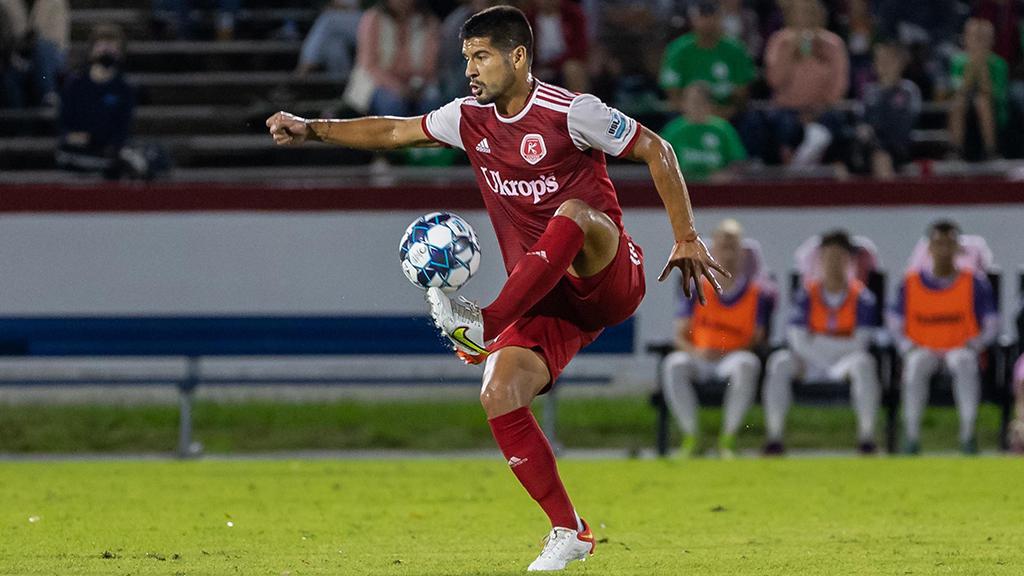 Argentine midfielder Zaca Moran made 26 appearances for the Richmond Kickers, and is now set to return to the club for the 2022 League One season. | Photo courtesy Jessica Stone Hendricks / Richmond Kickers

RICHMOND, Va. – The Richmond Kickers announced on Thursday the return of Zaca Moran after the midfielder’s contract option was picked up for the 2022 USL League One season.

“Zaca was a steady force for us this past season and we are looking to him to lead more and more this season with his experience,” said Kickers Chief Sporting Officer and Head Coach Darren Sawatzky said. “His adjustment to the American game came quickly, and his presence will be paramount to what we are looking to accomplish in 2022. Having a vocal player with his bite and a year under his belt allows us to build on the work we have done as we chase titles in Richmond.”

Nicknamed La Máquina (the machine), Moran enjoyed a fruitful first season in Richmond as he started all 26 contests he appeared in, amassing 2,317 minutes played – fourth-most of any outfield player. The former River Plate man led the team with an 80 percent passing accuracy rate while almost 78 percent of his passes went forward to transition the team from defense to attack. He would add three assists to his tally which finished tied for second on the team.

“I’m grateful to have the opportunity of being part of this club again,” Moran said. “Grateful of the staff and each person in the club who do their best on game days so that we have all the tools to do our best on the field. I’m convinced that it’s going to be a great year.

“I’m really happy to return to the Richmond Kickers family for another year. I’m excited to start the preseason, set goals and work to achieve them.”

Looking ahead to a second season playing in the United States and for the Richmond Kickers, Moran is motivated to help push the club to new heights in its historic 30th consecutive season.

“The previous year we ended the season with an empty feeling because we couldn't play in the USL League One Final,” Moran said. “I believe this year we must work harder and train ourselves mentally to be able to achieve this objective as a team. And personally, I will keep on working so I can help the team on and off the field.

“Last year I had great feelings playing at City Stadium. The support from the fans has been incredible and we must play for them in each game. They deserve it!”