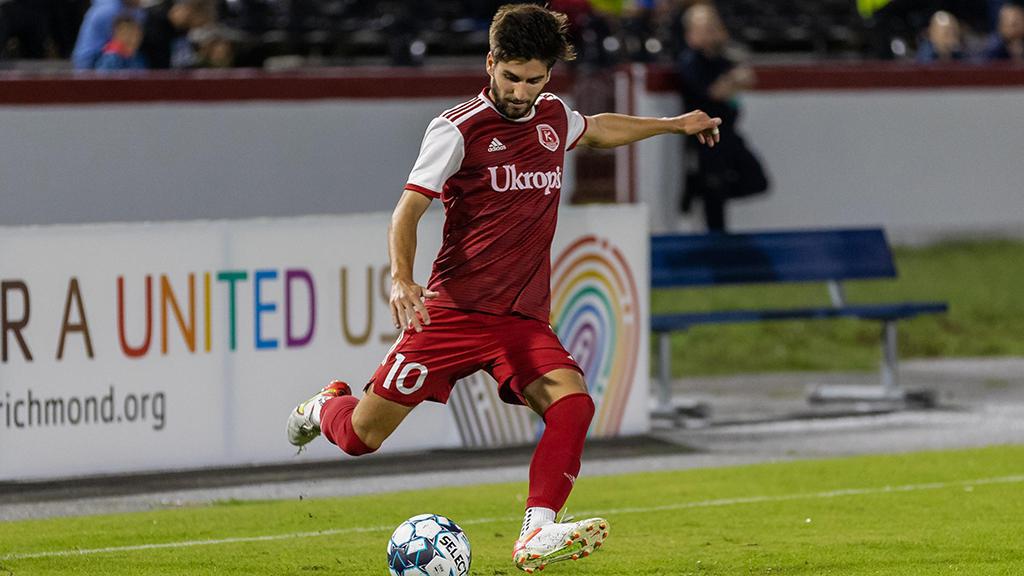 Spanish midfielder Nil Vinyals is set for his second season with the Richmond Kickers in 2022 after making 27 appearances in the past campaign. | Photo courtesy Jessican Stone Hendricks / Richmond Kickers

RICHMOND, Va. – The Richmond Kickers announced on Tuesday the club had exercised the contract option to retain Spanish midfielder Nil Vinyals for the 2022 USL League One season.

"Nil is a special player that can control the tempo of a game and give you that special pass that breaks down a defense,” said Kickers Chief Sporting Officer and Head Coach Darren Sawatzky. “We are looking forward to watching him continue to grow and lead here in Richmond. He fits the culture here with his professional approach, it will be exciting to watch him buzz in the midfield and lead the young guns."

Last year, Vinyals slotted right into the Kickers’ lineup in his first season with the club. The Barcelona native started in 25 of his 27 appearances and finished with the fifth-most minutes played of the Kickers’ outfield players. He returns to Richmond primed to pull the strings for Sawatzky during the club’s historic 30th consecutive season.

“I’m excited to come back to such a professional and historic club,” Vinyals said. “I’m thankful for the trust that the coaching staff has demonstrated all along, and I’m eager to keep building a winning culture that supports a structured brand of soccer.

“My goal and the team’s goal is to attain a level of consistency that allows us to fight for every title that we are in.”

Vinyals served as a key facilitator for the team in the middle of the field, leading the Kickers with four assists and 51 chances created, fifth most in the league.  With a full season and his first playoff appearance under his belt, Vinyals is looking to build on the 2021 campaign and push for more in front of the City Stadium faithful.

“Playing in front of the Red Army, the best supporters in the league, is something that I never take for granted,” Vinyals said. “Last year we were very strong at home and that has to continue if we want to win a title in 2022.”