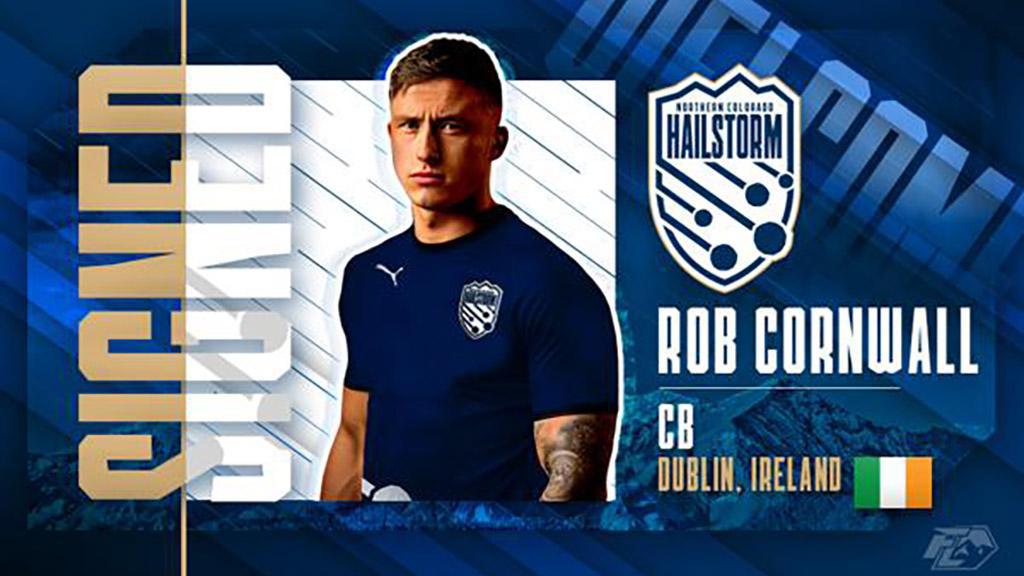 WINDSOR, Colo. – Northern Colorado Hailstorm FC announced its first signing in club history on Friday as it welcomed Irish center back Rob Cornwall, who scored one goal in five Europa Conference League qualifiers this season and led Bohemian FC to the Extra.ie FAI Cup final in November for its inaugural season in USL League One in 2022.

“I’m absolutely delighted to announce Rob Cornwall as the first player signing in Northern Colorado Hailstorm FC history,” said Hailstorm FC Head Coach Éamon Zayed. “Rob epitomizes what we are trying to build here: he has an unrelenting winning mentality, he has an unparalleled work ethic, and he has the burning ambition to win trophies and bring titles to the Northern Colorado community. He sets the tone for the team and is a leader we will be able to build a championship contender around.”

Cornwall made 34 appearances across all competitions for the Bohs this past season in the heart of the club’s defense. His 25 SSE Airtricity League Premier Division starts included six as team captain, while he also started in six of the Bohs’ eight league shutout victories. Cornwall scored the lone goal in a 1-0 win over Waterford FC on April 16 and scored the final goal of the match in a 3-1 win over Shamrock Rovers on November 12.

“I’m delighted to be signed and to be a part of this new exciting club, and I’m looking forward and feeling motivated for the challenges ahead,” said Cornwall.

The 27-year-old started four of Bohemian’s six Europa Conference League qualifiers during the 2021-22 campaign, where the club went 4-1-1. On July 29, in the second round, he scored the game-winning goal and helped earn a shutout in a 3-0 win against 15-time Luxembourg National Division champions F19 Dudelange.

Cornwall made three starts in the FAI Cup this season and played all 120 minutes in the final on November 28, which St. Patrick’s Athletic FC won 5-4 on penalties after the two clubs finished extra time tied 1-1.

In 2013, Cornwall—then just 17—signed his first professional contract with Shelbourne FC, who play in his home suburb of Drumcondra in Dublin, Ireland.

After a season with Shelbourne, Cornwall signed with 19-time League of Ireland champions Shamrock Rovers FC and helped lead the club to the semifinals of the FAI Cup. The Rovers’ leading scorer that year was current Hailstorm FC Head Coach Éamon Zayed.

Cornwall spent the second half of the 2015 season on loan with Derry City, then returned to Rovers for the 2016 season, where they finished fourth in the League of Ireland Premier Division and appeared in the Europa League’s qualifying round.

Cornwall joined Bohemian FC on a free transfer on January 1, 2017. The club finished third in the League of Ireland Premier Division in 2019 and second in 2020, and advanced to the semifinals of the FAI Cup and the League Cup in 2019. Bohemian appeared in the 2020-21 Europa League qualifying round, and in the 2021-22 Europa Conference League qualifiers.