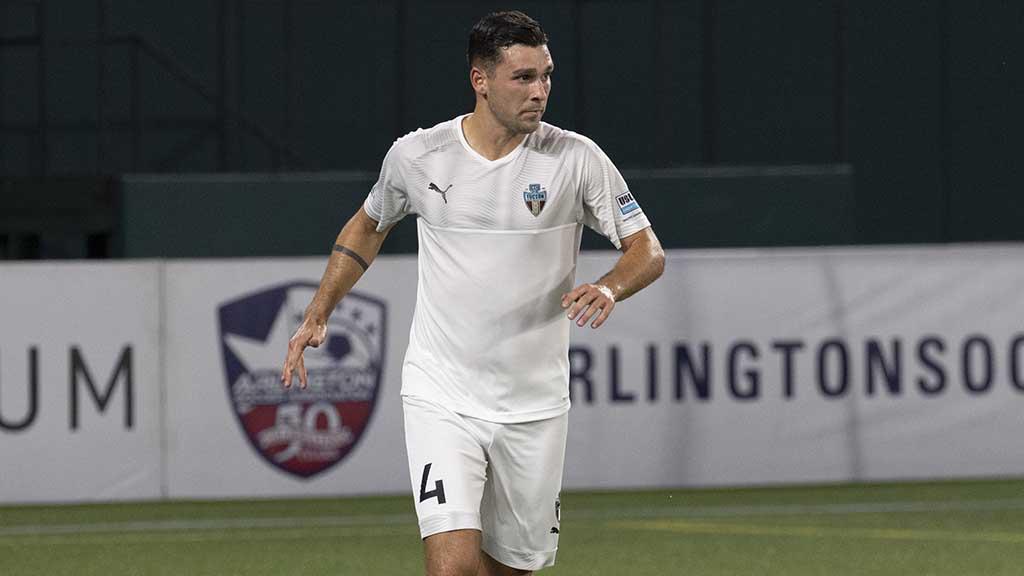 Defender Luca Mastrantonio is among six players set to return to FC Tucson for the 2022 season as the club announced its first roster moves of the offseason on Thursday. | Photo courtesy North Texas SC

TUCSON, Ariz. – FC Tucson announced its first roster moves ahead of the 2022 season on Thursday with six players set to return following the club’s successful run to the Semifinals of the 2021 USL League One Playoffs, presented by TwinSpires, this past fall.

Tucson exercised contract options on the club's 2021 Player of the Year Kaelon Fox and Defender of the Year, Luca Mastrantonio as well as forwards Gio Calixtro, Deri Corfe and Kevin Rodriguez, and midfielder João Delgado.

Mastrantonio ended the 2021 season with 63 clearances, 10 blocks, 28 interceptions, 22 tackles and 1,275 minutes played, and was named the team's top defender. Mastrantonio signed his first professional contract with FC Tucson and became a standout player in the backline. The 25-year-old from Rome, Italy, joined the team after a standout 2019 season with University of California-Irvine, where he was first team All-Big West Conference.

Fox’s first season with the club saw him appear in 26 of the team's 30 games, logging 2,370 minutes, making 103 clearances, 31 interceptions, 19 blocks and won 89 of his duels. He was named the team’s most valuable player. The 26-year-old from Louisville, Kentucky, captained the team from the backline, guiding the team to fourth – its highest finish in USL League One history.

Calixtro recorded four goals and four assists for the side as he appeared in 28 of the club's 30 games this season totaling 1,681 minutes of action. The 21-year-old from Portland, Oregon also recorded his first professional hat trick in a win over against Lauderdale CF on August 22.

Corfe ranked second on the team with eight goals during the regular season as he racked up 2,008 minutes and appeared in 29 matches. The 23-year-old England native also led the side with 56 shots, and scored the game-winner in the 87th minute of FC Tucson's 1-0 win over Richmond Kickers in the Quarterfinals of the USL League One Playoffs.

Rodriguez appeared in 14 games this season, including seven starts, as he spent most of the season sidelined with injury, working hard in training to get back into the starting lineup. His hard work paid off as he racked up three goals, all at crucial moments at the end of the season, helping FC Tucson grab a playoff spot and reach their highest league finish in USL League One.

Delgado proved to be the linchpin in the club's midfield finishing the season with a 78 percent passing accuracy rate, three assists, two goals, 23 interceptions and 100 duels won. The 27-year-old from Riachos, Portugal, joined FC Tucson ahead of the 2021 season after playing for Reading United AC of USL League Two in 2019. He will likely miss the beginning of the 2022 season as he recovers from an injury suffered in the season finale.