Digging into the Top 3 reasons Omaha, Greenville will claim the crown on Saturday 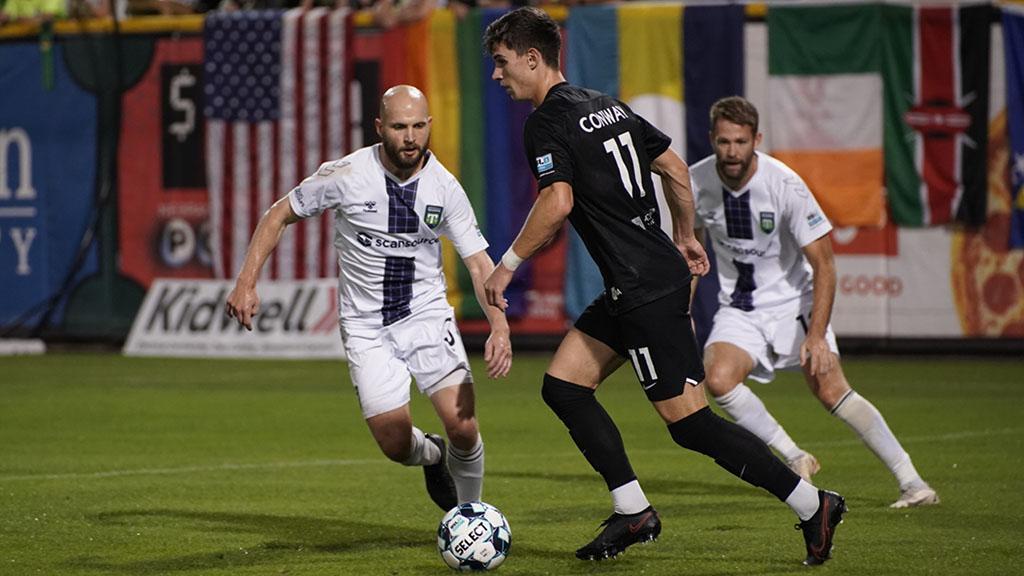 The Union Omaha attack including Evan Conway will square off with Greenville Triumph SC's defense and Tyler Polak in a key matchup for Saturday's USL League One Final. | Photo courtesy Union Omaha

Eight months and 172 games after we began in April, the 2021 USL League One Final arrives on Saturday night as Union Omaha plays host to Greenville Triumph SC at Werner Park (5 p.m. ET | ESPN+).

It should come as no surprise that these two teams have advanced this far. Omaha has been the most consistent team in the league in its second season, finishing with the most points and both the best defense and best attack in the regular season. Greenville, meanwhile, has set the standard over its first three campaigns, reaching the final in 2019 before claiming the title a year ago.

There’s good reason to believe in both teams’ chances going into Saturday, but which one will come out on top? In a special final edition of The Front Three, we’ve got three reasons why each team will be crowned title-winner.

Three Reasons Union Omaha Will Win the League One Final 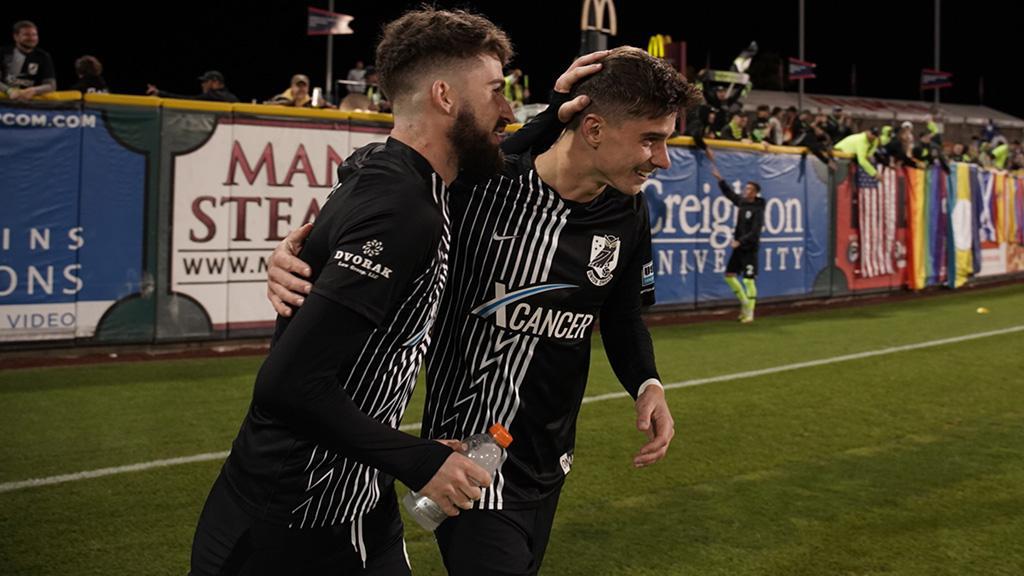 Union Omaha's Greg Hurst and Evan Conway were the only teammates to reach double-digit goals in League One this season, and will spearhead the club's title bid in Saturday's Final. | Photo courtesy Union Omaha

1. There’s No Place Like Home – One of the biggest reasons for Omaha’s consistency this season was the fact that no matter where los Buhos played, they got the job done. The side won an equal number of games at home as it did away in the regular season – seven apiece – to roll to its first-place finish.

Still, there’s something important about being at home in the postseason historically, and Union’s success in winning eight games and losing only three times at home after last weekend’s Semifinal drubbing of FC Tucson is notable. So is the league-high 29 goals the side has notched at home too, and then there’s the history of the postseason in the USL Championship and League One – in 10 Finals since 2011, only one road team has taken victory, and only one team has won on the road in the League One Playoffs all-time.

Upsets are fun, and for sure, they happen. But homefield advantage is still a notable edge for any side to have on its side.

2. Dynamic Duo – Omaha’s attacking explosion against FC Tucson last Saturday night was missing one thing – a goal by Greg Hurst. You see, the new arrival this offseason and freshly minted All-League First Team selection has been the spearhead for Union’s attack this season with 13 goals in the regular season. Unlike some other top strikers in the league, however, Hurst has had a major sidekick in Evan Conway, who notched the opening two goals against Tucson and now has 12 goals this campaign overall.

Hurst and Conway remain the only teammates in League One in 2021 to have each recorded double-digit goals, a sign of why the club has now logged 50 goals in 29 games overall this season. Los Buhos also have three players with at least five assists in Damia Viader (5), Conor Doyle (6) and Devin Boyce (8), something else no club can claim.

A key to winning finals is having difference-makers in the final third. Omaha has plenty of them to try and break down Greenville’s back line.

3. How the Turntables Turn – If there’s anything that can act as a motivator, it’s a rematch, especially if it’s a result that might have left a disappointed feeling in the locker room after the game.

Just over a month ago, Union Omaha took on Greenville Triumph SC on its home turf at Werner Park and in the attacking third, it just didn’t quite happen. The hosts recorded a 1.3xG mark according to Opta but notched only two shots on target out of their 13 opportunities as the pressure the hosts tried to build failed to pay off.

Reversing that attacking performance and delivering a title in front of the club’s home fans for the first silverware in club history would be the perfect end to an outstanding season. Omaha’s going to do everything in its power to make that happen and wash the memory of October 9 away. 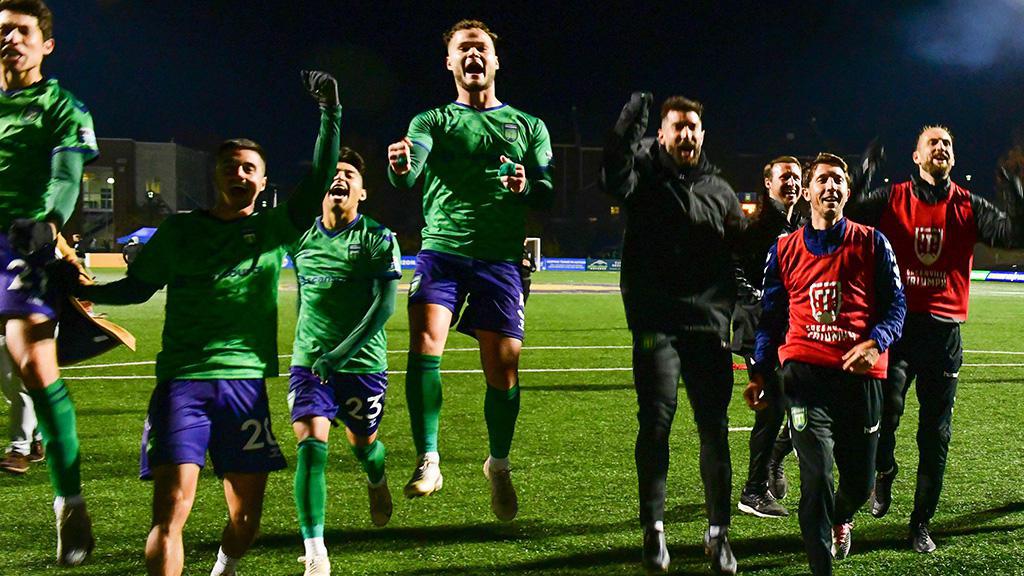 1. Keep That Train Rolling – If you’re looking to finish with the best record in the league, consistency throughout the season is the ideal.

If you’re looking to win a postseason title, well, you might just want to peak at the right time. After a season that saw numerous players sidelined for spells and Triumph SC’s form take a hit as a result, there has been no better team over the past two months than Head Coach John Harkes’ squad. The defending title holders are 7-0-3 over their last 10 games including their Semifinal win in extra time against a tough Chattanooga Red Wolves SC side.

That positive momentum and the confidence that has given the squad can carry Greenville to its second consecutive title on Saturday night.

2. Defensive Stability – Twenty-three games into the regular season, Greenville Triumph SC had conceded 29 goals in 23 regular season games. Not bad, but not quite the standard we had come to expect from the club as it ranked tied for sixth-fewest goals conceded in the league, firmly middle of the pack.

Guess what? Six games later, that goals conceded total is still the same, and a big reason why is the stability the side has been able to establish in its defensive third. The quintet of goalkeeper Paul Christensen and defenders Tyler Polak, Brandon Fricke, Evan Lee and Abdi Mohamed have played every minute of the six consecutive shutouts the side has posted since October 1, sending Triumph SC to this point.

Have some performances been better than others in that stretch? Of course, but if your back line isn’t going to give up much – even to the best attack in the league – then you’re going to have a great chance to not get beat.

3. Frontline Gamechanger – If you want a number that illustrates the impact Marios Lomis has had on Greenville Triumph SC’s fortunes this season, it might be this – in 27 games across the regular season and playoffs, he’s now the club’s all-time leading scorer.

Now, you’re right that Triumph SC and League One both have pretty short histories, but the fact that Lomis has come in and knocked in 15 goals in his first season at the club made him the difference-maker the club needed in the final third this season. Lomis didn’t even really overperform, either, with Opta ranking his Expected Goals mark for the season at 13.91xG.

In a game like this, the opening goal can make all the difference. Omaha may have the greater array of firepower at its disposal, but Greenville has a potential ace to lead its attacking line.