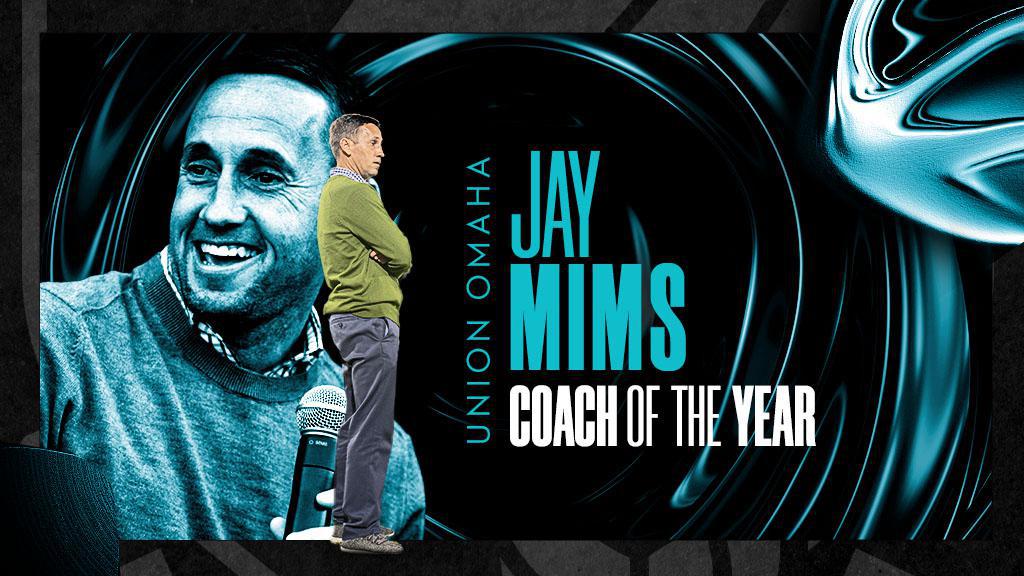 This year, the coach who had made his name locally as an assistant at Creighton University before founding the program at the University of Nebraska Omaha built on Union’s initial success with a campaign that saw the side finish top of the league standings while ranking tied for first in goals scored and conceding fewer goals than any other team in the regular season.

On Wednesday, Mims was honored with the League One Coach of the Year award as he prepares to lead his side into Saturday’s 2021 USL League One Final at Werner Park.

“Every Head Coach knows you are only as good as your staff and I am blessed to have such great people working with me,” said Mims. “I have incredible assistants, top notch medical staff, great equipment and operations directors, and great support from ownership/front office. And most importantly, I appreciate and am grateful of the players. They give so much every day, and this award is a reflection of their quality and character.

“We built a great foundation in Year 1 and knew it would be difficult to duplicate in Year 2. But Year 2 has remarkably been even more special than Season 1 with us winning the league and breaking more records on and off the field.”

With the club’s top seven players in minutes played back with the squad, Mims had a solid group to build on, while the addition of players like forward Greg Hurst and midfielder Conor Doyle – both of whom appeared in every game of the regular season – added to the quality already in the side. Omaha lost only once in the first half of the season, building at one point a 10-game undefeated streak, but the club’s consistency in the defensive third was what proved the foundation for its overall success.

“I believe a major factor of how this happened is because of the team culture,” said Mims. “I define culture as trying to do the right things everyday while showing value and care for each other. It has been a fun ride with such a special group.”

“When you have the level of success that Jay had last season in his first year as a professional head coach, it’s hard to improve on that level in Year 2, but Jay and his Technical Staff managed to do just that,” added Omaha General Manager Peter Marlette. “He’s a coach who has a clear vision of how he wants his teams to live, train, and play, and he brings in players who fit into that vision and gets their complete buy-in. The success of this team in 2021 is no accident, it comes from Jay’s tireless work and his ability to have every player on the roster moving in the same direction.”

Mims earned 69 percent of the ballot to earn the award. Greenville Triumph SC’s John Harkes finished second with 13 percent, and a total of five coaches overall earned votes in the poll.

The 2021 USL League One Awards were voted on by team technical staffs and executives representing every team.