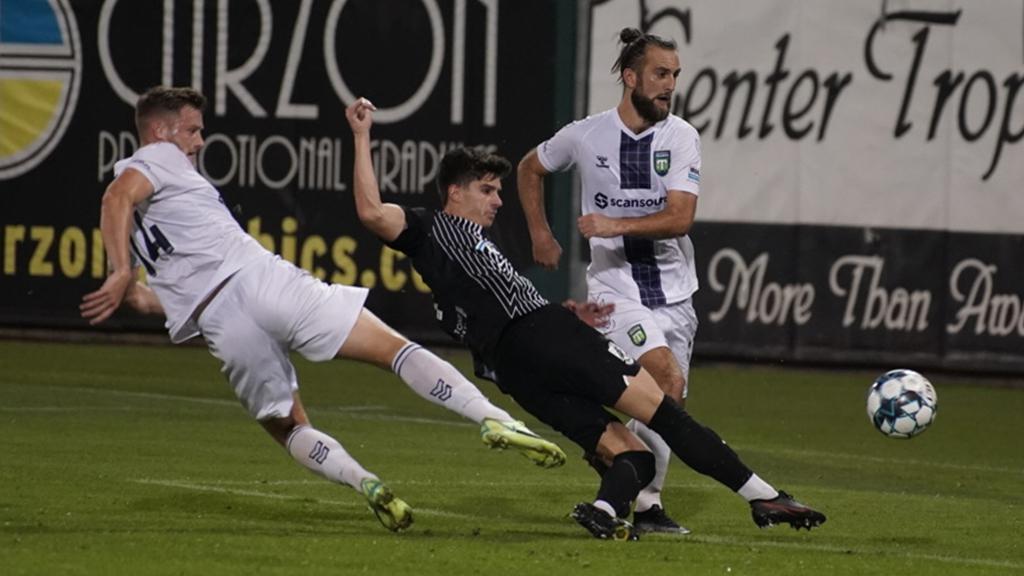 Union Omaha and Greenville Triumph SC meet on Saturday evening at Werner Park in the 2021 USL League One Final as Omaha looks for its first silverware against the defending title holder. | Photo courtesy Union Omaha

PAPILLON, Neb. – When Greenville Triumph SC and Union Omaha met in May in the first nationally-televised game in USL League One history on ESPN2, it was billed as “Unfinished Business” after the 2020 League One Final that wasn’t.

On Saturday night, the top two sides in League One’s past two regular seasons are set to settle all business as they meet in the 2021 USL League One Final at Werner Park (5 p.m. ET | ESPN+ | SiriusXM FC).

No. 2-seed Greenville returns to the final for a third consecutive season, and this time as defending title holder, as its experienced squad hit its stride at the perfect moment to salvage what at the start of September was looking like a season that would not end in the way the side had envisioned. Sitting in ninth place in the standings after a summer in which its squad was hit by injury and poor form, Greenville began a turnaround that drove the side up the table as leading scorer Marios Lomis finished the campaign with 14 goals to earn All-League First Team honors and the side’s defense declined to allow a goal in October. That shutout streak is now at 639 minutes after Greenville’s 2-0 victory after extra time last Saturday night to defeat No. 3-seed Chattanooga Red Wolves SC in the Semifinals when goals in the additional 30 minutes by Jesus Ibarra and Lomis sent the hosts through at Legacy Early College.

Backing the strong run of defensive form has been goalkeeper Paul Christensen, who has recorded eight shutouts across the regular season and playoffs since deputizing for two-time League One Goalkeeper of the Year Dallas Jaye in midseason. Defenders Brandon Fricke and Tyler Polak have also been ever-present since the start of September across nine games with Abdi Mohamed only missing 20 minutes of action, giving Greenville a strong defensive base to build off. That structure was in evidence late in the regular season when Triumph SC took a 1-0 victory at Omaha on October 9 thanks to an early goal by Lomis and a defensive effort that allowed only two shots on goal for the hosts at Werner Park.

No. 1-seed Omaha could be better set to challenge Greenville’s defense this time around after coming off a 6-1 victory against No. 4-seed FC Tucson last Saturday evening in its Semifinal at Werner Park. The goal total was the largest in League One history as the hosts rattled off 16 shots on goal – also an all-time high in League One – and Evan Conway scored twice before four teammates found the net in the second half. Among those was Damia Viader, who on Tuesday was named the League One Defender of the Year, and Devin Boyce, who finished tied for second in the league with eight assists in the regular season as Omaha reached 50 goals for the campaign overall.

While Omaha’s attack has been impressive over the final stages of the season – in its 12 games since the start of September, the club has recorded 29 goals, while newcomer Greg Hurst leads the team with 13 tallies – the key to Omaha’s success over the course of the year has been its defense. Backed by League One Golden Glove winner Rashid Nuhu – who posted a 0.75 goals-against average in 24 regular-season appearances – the side has seen both Viader and captain Feretty Sousa log more than 2,250 minutes with holding midfielder JP Scearce also playing a notable role in front of the back line. With strong home support set to be on hand, los Buhos will be looking to end Greenville’s reign and take the crown on their home turf.