Top two seeds will square off in title game at Werner Park at 5 p.m. ET next Saturday night 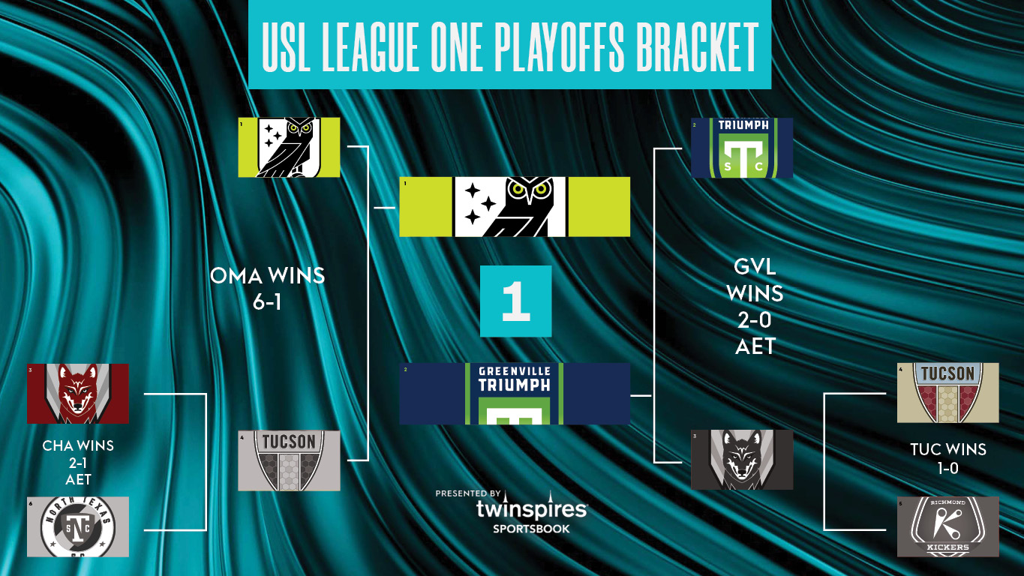 TAMPA, Fla. – Union Omaha will play host to Greenville Triumph SC in the 2021 USL League One Final on Saturday, November 20 at 5 p.m. ET at Werner Park, bringing together the top two teams from the league’s regular season for a final showdown to conclude the campaign. The game will air live on ESPN+ and SiriusXM FC.

Triumph SC enters as defending title holder from a season ago having also reached the league’s inaugural Final in 2019, while los Buhos will try to claim their first silverware in club history on their home turf in Papillon, Nebraska.

Top-seeded Omaha advanced to the Final by taking a 6-1 victory against No. 4-seed FC Tucson on Saturday evening at Werner Park that saw Evan Conway strike twice for the hosts. Conway opened the scoring in just the third minute for los Buhos before Damia Viader, Devin Boyce, Austin Panchot and Emir Alihodzic also found the net. Omaha recorded the most goals in a League One playoff game as Tucson played for just over an hour down to 10 men after a red card in the aftermath of Conway’s second goal saw Maxi Schenfeld sent off.

No. 2-seed Greenville earned its place with a 2-0 victory against No. 3-seed Chattanooga Red Wolves SC on Saturday night at Legacy Early College in a thrilling contest that went to extra time. With the game scoreless after 90 minutes, Greenville took the lead in the seventh minute of the first period of extra time with a ferocious strike to the left corner of the net. Then with nine minutes remaining, Triumph SC leading scorer Marios Lomis added a second to put the game away for good for the hosts.

The sides have met twice this season with Greenville holding a 1-0-1 record against Omaha. The two sides – who were scheduled to play in the 2020 Final before its cancellation due to COVID-19 protocols – met early in the season at Legacy Early College in what was the first nationally-broadcast game in League One history on ESPN2. That game ended in a 1-1 draw as Omaha leveled after Triumph SC had taken a first-half lead, but Greenville earned a 1-0 win in its prior visit to Werner Park this season on October 9 as Lomis’ goal in the 12th minute stood as the winner.

A combined nine members of the 2021 USL League One All-League Teams could be on the field in the Final, with Omaha having led all sides with five selections following their regular season performances. Viader and forward Greg Hurst earned First Team honors, while goalkeeper Rashid Nuhu, who earned League One’s Golden Glove with a 0.75 goals-against average in the regular season, Boyce and Conway were voted to the All-League Second Team.

Lomis led Greenville’s four selections as he was named to the First Team after scoring 14 regular season goals. He was joined by defenders Abdi Mohamed and Brandon Fricke, and midfielder Aaron Walker in being honored.