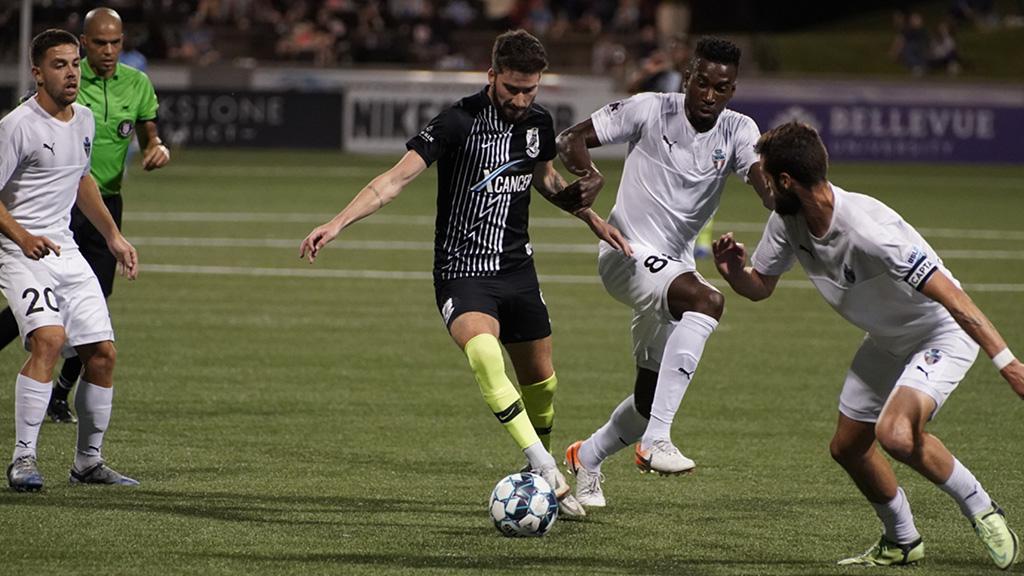 Union Omaha leading scorer Greg Hurst will be looking to find the net on Saturday night as his side hosts FC Tucson in the Semifinals of the 2021 USL League One Playoffs, presented by TwinSpires. | Photo courtesy Union Omaha

Four teams remain in the 2021 USL League One Playoffs, presented by TwinSpires, as the Semifinals kick off Saturday night. After enjoying an opportunity to rest and recuperate on their bye weeks last week, top-seeded Union Omaha and Greenville Triumph SC join the fray this weekend.

Can the Hosts Pull Rank?

Last weekend’s Quarterfinals saw a pair of tightly fought games, but both home teams ultimately advanced. Chattanooga Red Wolves SC needed extra time to knock off North Texas SC 2-1 at CHI Memorial Stadium. FC Tucson was locked in a scoreless battle against the Richmond Kickers until the 87th minute before advancing from Kino North Stadium. Now last week’s winners must take their shows on the road.

Only once in USL League One postseason history has a road team won a match, though it is an admittedly small sample size. That winner was Greenville knocking off Lansing Ignite FC in the 2019 Semifinals. Could Greenville find itself on the wrong end this time around?

Despite earning the No. 1 season and winning the regular season title, Omaha’s home record wasn’t spectacular this season at just 7-3-4. Perhaps worryingly, all three of those losses have come since September 25. Omaha has lost three of its last five home games, including a 1-0 loss to this weekend’s visitors in late September, though that match was played at Morrison Stadium rather than Werner Park.

It felt like the stakes were huge when the Red Wolves visited Greenville on October 23 in their penultimate regular season match. Chattanooga was on track for the No. 2 seed at kickoff, but Greenville was hot on its heels, knowing a win would see it leapfrog Chattanooga. Really, neither team could afford to lose if it wanted to finish second and earn a bye to the Semifinals.

The match we saw reflected those stakes as both teams looked apprehensive about pushing too hard for the win and leaving themselves vulnerable defensively. The teams combined for nine yellow cards but just one shot on target.

If the stakes felt huge then, they must feel titanic now. A spot in the USL League One Final is on the line. Like Omaha, Greenville has been good but not outstanding at home this season, posting a 6-3-5 record. Chattanooga has lost once and drawn once in its two visits to South Carolina so far this season. The Red Wolves post a respectable 4-4-6 record away from home in the regular season.

Statistically, these teams have been so close this year. Chattanooga’s 37 goals just barely edged Greenville’s 36. Both teams conceded 29. This match feels like it could go down to the wire and that a single exceptional moment could make the difference.

Union Omaha has waited a long time for this.

Los Buhos will make their postseason debut on Saturday following back-to-back outstanding regular seasons. Omaha finished second in the 2020 regular season and was slated to play in last year’s Final before its cancellation.

Omaha followed that up by easing to the best record in the league this year and had to watch the Quarterfinal round from the sidelines while waiting its turn. Finally, the Owls are ready to play a win-or-go-home match. Omaha finished tied with Tucson for the best attack in the league with 44 goals, but posted the league’s stingiest defense, conceding just 22 in 28 matches. The next closest teams, Greenville and Chattanooga, both conceded 29. Greg Hurst and Evan Conway were the only pair of teammates to each eclipse 10 goals this season.

On paper, Omaha looks like the team to beat. Waiting to catch Union off guard, though, is a feisty upstart Tucson team more than capable of springing the upset. Tucson was the last season to clinch a postseason berth but enters this match unbeaten in four games with some momentum after back-to-back wins over Richmond.

Tucson won in its last visit to Omaha, so it should enter the weekend with confidence. All four contests between these teams this season were decided by a single goal, so another close match could be on the cards.