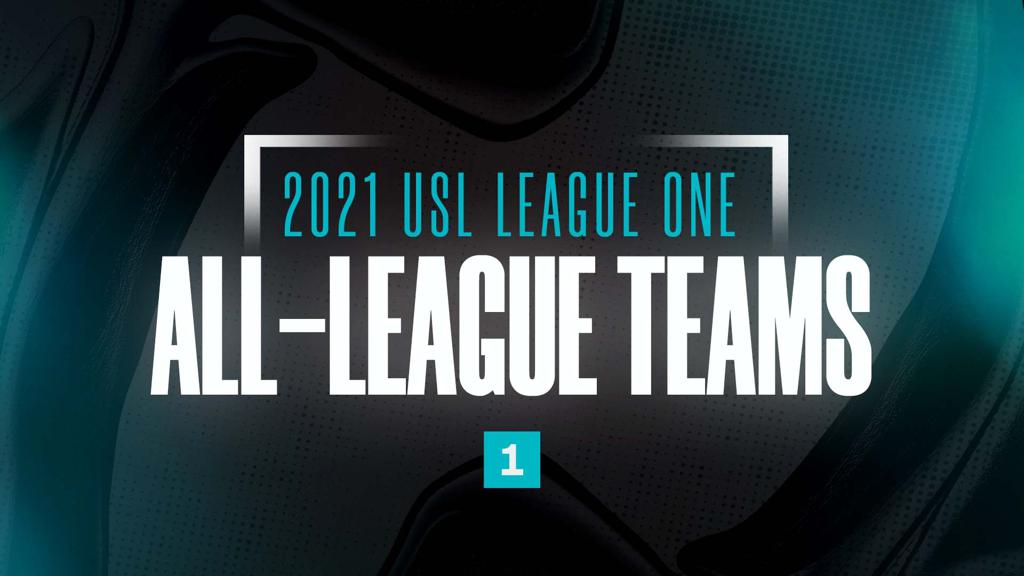 TAMPA, Fla. – USL League One honored its leading performers from this year’s regular season campaign on Wednesday with the announcement of the 2021 USL League One All-League Teams. Chattanooga Red Wolves SC, the Richmond Kickers and Union Omaha each saw two players named to the First Team, while Omaha led all clubs with five players across the 22 selections. Eleven of the league’s clubs were represented overall.

The 2021 USL League One All-League Teams were voted on by club management. 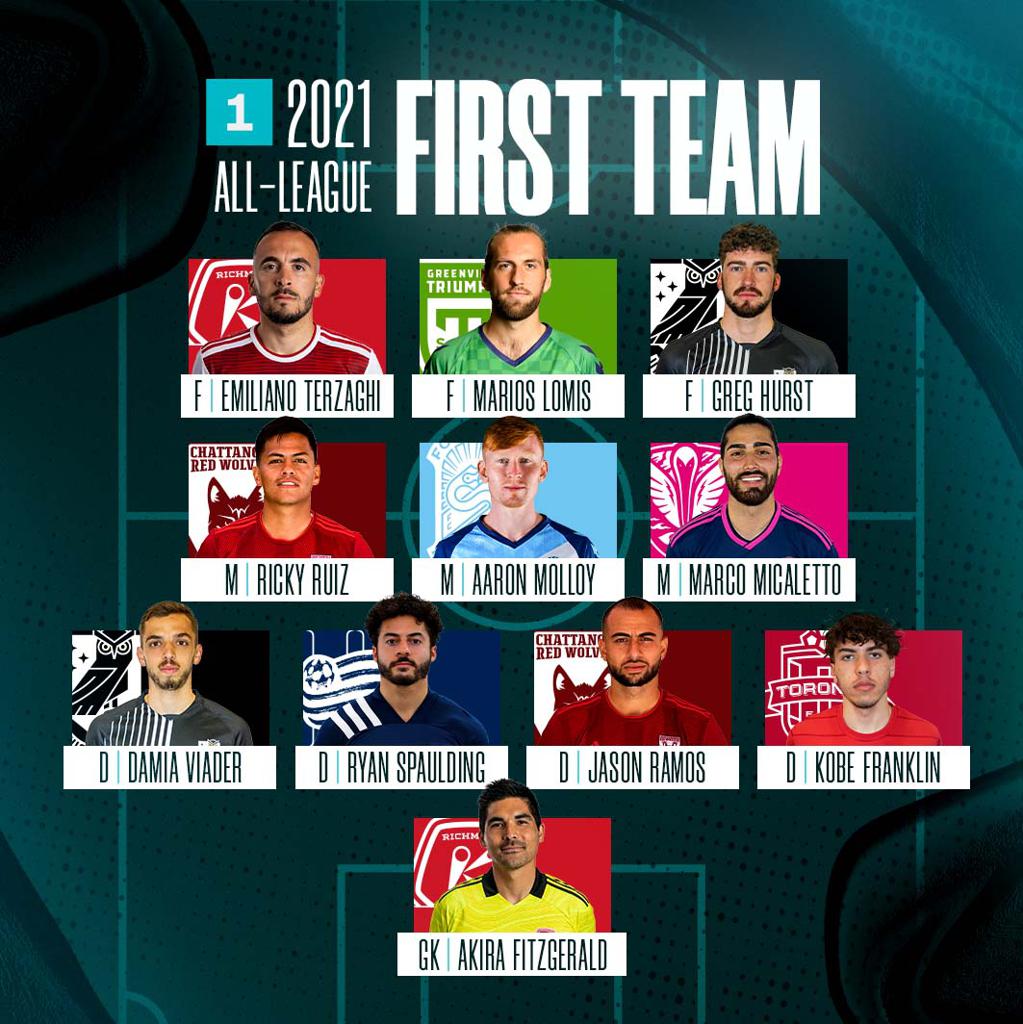 GK – Akira Fitzgerald, Richmond Kickers: Fitzgerald had a remarkable season in which he led the league with both 10 shutouts and 89 saves, recording a save percentage of 71.8 percent as he played all-but-one game of the regular season to help Richmond see postseason action for the first time in League One.

D – Kobe Franklin, Toronto FC II: The 18-year-old Canadian youth international had a fine campaign as he ranked eight in the league with 46 interceptions and also tied for fifth in the league with six assists, ranking fourth among full backs with a +4.24 Goals Added rating.

D – Jason Ramos, Chattanooga Red Wolves SC: Ramos had a standout year in the center of the Red Wolves’ defense as he ranked second among outfield players with 211 recoveries and also notched 87 clearances, 25 interceptions and 32 tackles won. Ramos was also solid on the ball, completing 1,275 of 1,537 passes (83 percent) during the regular season.

D – Ryan Spaulding, New England Revolution II: Spaulding ranked fourth in League One in interceptions with 51 for the season and won 60.7 percent of duels and 66.2 percent of aerial duels while also scoring three goals and recording 26 key passes. His performance saw him record the highest Goals Added mark among full backs at +5.88, ranking 13th overall in the league.

D – Damia Viader, Union Omaha: The Spanish standout earned his second consecutive First Team selection after recording six goals and five assists and finishing second in the league with 58 key passes in attack. He also ranked third in the league in interceptions with 56 and third among outfield players with 205 recoveries defensively and completed 43 dribbles, good for third in the league.

M – Marco Micaletto, South Georgia Tormenta FC: Micaletto earned his first All-League First Team honors as he recorded a team-high 11 goals – tied for fourth in the league – and recorded three assists and 40 key passes as he started in every game for Tormenta while missing only 22 minutes of action all campaign.

M – Aaron Molloy, Forward Madison FC: Molloy was the central cog that made Madison tick as he completed a league-high 1,615 of 1,874 passes in the regular season for an 86.2 passing accuracy rate and 50.38 xPass rating, second-highest in the league. Molloy also led outfield players with 237 recoveries, and had four goals, three assists and 54 key passes, putting him third in the league in the latter category.

M – Ricky Ruiz, Chattanooga Red Wolves SC: Ruiz tied the League One record with 10 assists in the regular season and also led the league with 59 key passes as he earned his first All-League First Team selection and second overall. The 25-year-old also won 55.6 percent of duels, completed 74 percent of passes overall, and ranked 11th in Goals Added at +5.96.

F – Greg Hurst, Union Omaha: Hurst continued to prove a prolific finisher after his offseason move to Omaha to earn his second consecutive All-League First Team honor. The 24-year-old led Union with 13 goals in the regular season – good for third overall in the league – as he notched a goal every 170.3 minutes. Hurst also recorded two assists and 25 key passes and finished seventh in the league with a +6.30 Goals Added mark.

F – Marios Lomis, Greenville Triumph SC: Lomis produced his finest season since moving to the United States for Triumph SC as he finished second in the league with 14 goals in the regular season. The Dutch forward averaged a goal every 138.3 minutes and also notched one assist and 16 key passes while finishing the regular season in second place in total shots on 60, earning the league’s second-highest Goals Added mark of +7.21.

F – Emiliano Terzaghi, Richmond Kickers: The Argentine forward took his outstanding campaign in 2020 and built on it for the Kickers this year as he set a new regular season record with 18 goals in 27 appearances. Terzaghi averaged a goal every 128.4 minutes to help drive the Kickers to the postseason and earned a +6.65 Goals Added mark for the campaign, fourth in the league. 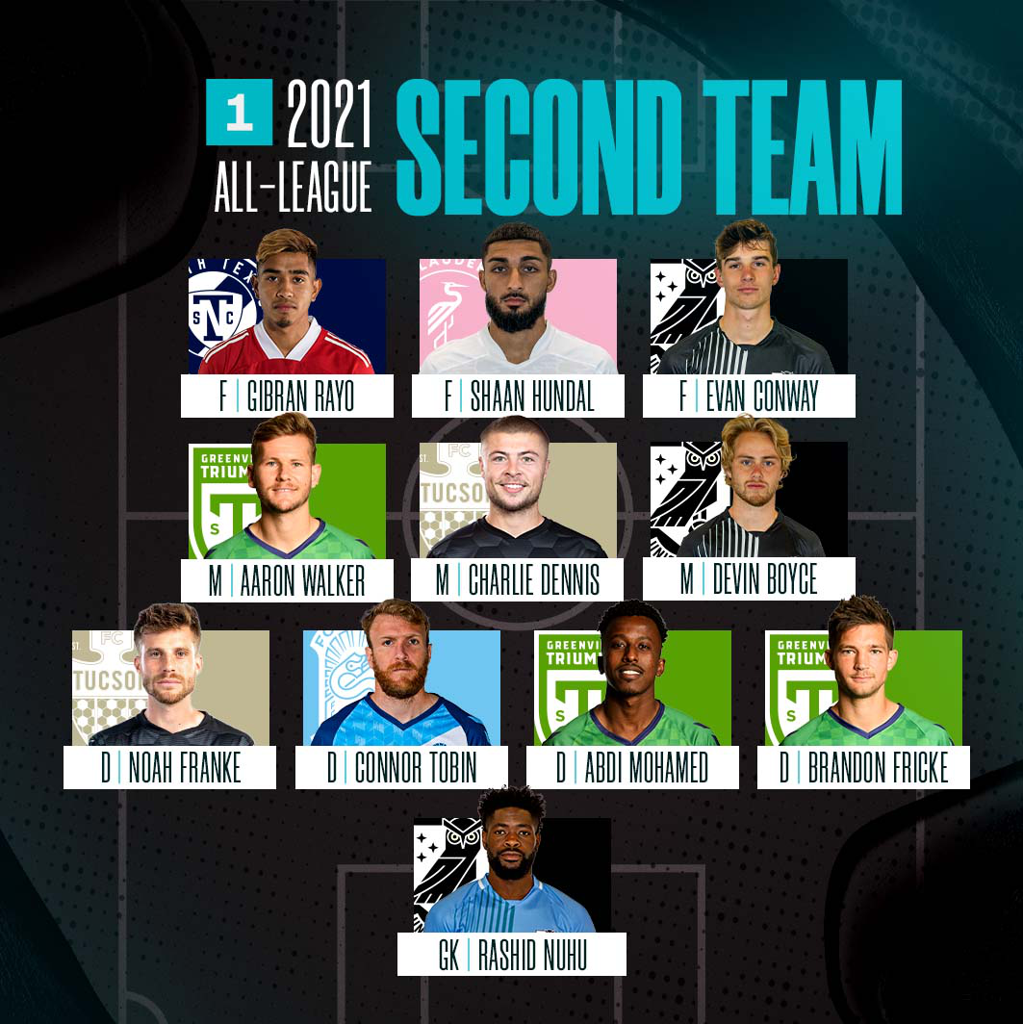 GK – Rashid Nuhu, Union Omaha: Nuhu earned his second consecutive selection to the All-League Second Team after earning the League One Golden Glove with a league-best 0.75 goals-against average. The Ghanaian recorded a save percentage of 71 percent as he recorded 44 saves in 24 appearances and posted a +2.32 Goals Added mark for his defensive play.

D – Noah Franke, FC Tucson: Franke had a strong all-around season, ranking tied for 11th in the league with 43 interceptions and also winning 31 tackles at a 71.1 percent success rate while recording 148 recoveries. In attack, Franke notched four assists and 20 chances created while posting an overall passing accuracy rate of 82.7 percent.

D – Brandon Fricke, Greenville Triumph SC: Fricke earned his second consecutive selection to the All-League Team having been a First Team selection in 2020 as he ranked sixth in the league with 85 clearances while also recording 37 interceptions and 107 recoveries defensively while also notching one goal and one assist in attack.

D – Abdi Mohamed, Greenville Triumph SC: Mohamed earned his first selection to the All-League Team after recording 21 interceptions and 45 clearances and a 75 percent tackle success rate defensively and three assists and 24 key passes overall when joining the attack for a Greenville side that ramped up defensively down the final stretch.

D – Connor Tobin, Forward Madison FC: The veteran center back earned a second consecutive All-League Second Team selection as he led the league in clearances with 143 and also ranked second in successful passes with 1,320 at an accuracy rate of 84.8 percent. Tobin earned the highest Goals Added rate among defenders in League One at +5.91 in the regular season.

M – Charlie Dennis, FC Tucson: Dennis proved a key catalyst for FC Tucson’s trip to the postseason as he led the squad with nine goals and eight assists, finishing tied for second in the league in the latter category. The English midfielder also ranked sixth in the league with 43 key passes and completed 79.2 percent of his passes overall.

F – Evan Conway, Union Omaha: Conway earned his second consecutive All-League selection after being on the First Team in 2020 as he scored 10 goals, good for seventh in the league and second on los Buhos, while averaging a goal every 112.1 minutes. Conway posted a 62.5 percent shooting accuracy rate and also notched one assist and 13 key passes overall in the regular season.

F – Shaan Hundal, Fort Lauderdale CF: The former Canada U-20 international had a breakout season as he recorded 11 goals to tie for fourth in the league while also recording three assists and 20 key passes. Hundal averaged a goal every 171.1 minutes and ranked ninth in the league with a +6.05 Goals Added mark, highest in Fort Lauderdale’s squad.

F – Gibran Rayo, North Texas SC: The 20-year-old recorded seven goals, two assists and 24 key passes to help North Texas return to the postseason this year, and also put in solid work on the defensive side of the ball with 16 interceptions and 14 won tackles at a success rate of 60.9 percent. The Dallas native also posted a passing accuracy rate of 82.7 percent and led his side with a +4.72 Goals Added mark.