What’s the road to the League One title going to look like, and who’ll lift the trophy? 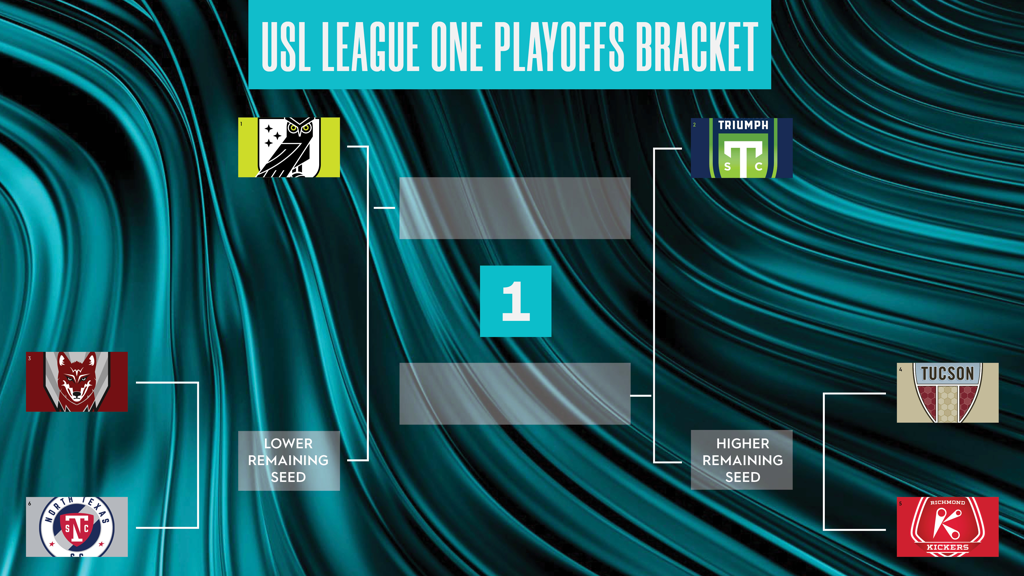 We’ve got our field of six teams in the 2021 USL League One Playoffs, presented by TwinSpires, and that brings us to the vital question ahead of Saturday’s action getting underway.

As we talked about in the Playoff Tiers, this isn’t an easy bracket to pick. The competitiveness among the teams that remain – and the matchups that could be created depending on who advances from the Quarterfinals – make this an intriguing postseason.

So, we’ve asked our resident expert Nicholas Murray to weigh in on what he thinks is going to happen over the next three weeks.

If the season series is any guide, Chattanooga Red Wolves SC is going to find a way to move on here. The Red Wolves took two wins and two draws – both of which they rallied to earn – against North Texas SC on their way to a third-place finish and the first playoff game at CHI Memorial Stadium on Saturday night.

But things have changed noticeably since the last meeting between these sides on September 8. At that point, Chattanooga was contending for a first-place finish, now it’s not only seen its undefeated home record slip away with defeats in its last two games but it’s only two wins in a 2-5-1 close to the season were against last-placed North Carolina FC.

North Texas in its last seven games, meanwhile, is 4-1-2, and while it still has a bad habit of not closing out games every time, it’s getting better at that part of the game. So, give me the No. 6 seed for the road upset.

You’re a team that just lost in a pretty bad way to an opponent. What’s the thing you’d like most? A rematch, a chance to set the record straight, right? That’s exactly what the Richmond Kickers get to open their postseason on Saturday when they head back to Kino North Stadium to face an FC Tucson side that jumped past them for homefield advantage with a 4-2 victory on the final day of the regular season.

In the big picture, though, is this good for the Kickers? The answer is probably not. Tucson has had its ups and downs on home turf this season – you could add last weekend’s result to the home wins against the New England Revolution II and Greenville Triumph SC, but still contrast that with defeats to North Carolina FC and North Texas SC, twice – but the Kickers just haven’t consistently found a way to make it work on the road.

There are some bright spots, two of the three road wins the Kickers took this season were at Greenville and North Texas – the latter in remarkable comeback fashion – but overall Richmond has lost four out of five on the road going into this one and I’m not sure they turn last weekend’s result around.

As the top seed going into the postseason, No. 1 Union Omaha gets to play host to No. 6 seed North Texas SC in this version of our bracket. Is that a good thing? Well, maybe, but after the two teams finished in a draw in all four of their regular season meetings it’s not necessarily the sort of mismatch you might expect from the numbers in front of each club’s name.

North Texas has battled well against Omaha, in fact, allowing only four goals and 16 shots on target in those four games, and almost grabbed victory when they met on the final day of the season at Globe Life Park before Nicolas Firmino’s penalty kick in second-half stoppage time pulled los Buhos level.

You might expect another tight game here, and that could be the case. But with an extra week to prepare and on home turf, I get a sense Omaha wins this one going away as its attack – which won the Expected Goals matchup in all four games – gets the finishing it needs to advance.

We would certainly be in for an absolute treat if Greenville Triumph SC and FC Tucson put on the sort of show they did in their most recent meeting at Legacy Early College on September 19. That night saw the teams exchange the lead twice after Tucson had gone ahead early before Nico Brown’s goal in the 78th minute left us with a 3-3 draw.

That game, however, was played in what must now feel like an eon ago for Triumph SC. The result aside, that was the last time Greenville gave up multiple goals in a game as it enters the postseason on a five-game shutout streak that helped it elevate to second place in the final standings.

That’s a much different proposition to the side Tucson has faced previously this season, and while Charlie Dennis and the visitors still have firepower, it might not be enough to overcome the defending title holders. Greenville edges it.

When Union Omaha and Greenville Triumph SC made history earlier this season as the clubs that played in the first USL League One game broadcast on national television, it was billed as unfinished business from last year’s Final. Of course, it ended in a draw, and nothing was settled.

But if this plays out, then we’re going to get our reckoning in the final game of the season, and that’s going to be just grand. You get the highest-scoring attack in the league in Omaha with Greg Hurst and Evan Conway leading the way and an outstanding defensive unit against a Greenville side that has regained its own defensive mojo in the past six weeks.

Greenville could have a mental edge here. After all, it went into Werner Park on October 9 and took a 1-0 win behind Marios Lomis’ early goal. I get a sense this game goes the other way, though, and maybe after extra time. Los Buhos claim the crown in front of their home fans.