USL League One Team of the Week - Week 29

TAMPA, Fla. – USL League One announced on Monday the Team of the Week Presented by Cleer Audio for Week 29 of the 2021 regular season, with North Texas SC midfielder Bernard Kamungo named Player of the Week after scoring a pair of goals after coming on as a halftime substitute in a 4-1 win against the New England Revolution II that vaulted NTSC into the playoff positions with one game to go in the season.

With the game level after each side scored in the opening 10 minutes, North Texas was reduced to 10 men just before the half-hour mark when Mark Salas was sent off. Reshuffling his lineup at halftime NTSC Head Coach Eric Quill introduced Kamungo, who made an immediate impact with a goal that put North Texas ahead in the 57th minute despite being down a man. The Tanzanian 19-year-old then put the game to bed with a minute to go with NTSC’s fourth goal of the game, moving the side into fifth place ahead of New England going to the final weekend of the regular season.

North Texas’ victory saw it earn three selections to the League One Team of the Week, which was matched by Forward Madison FC, which took a midweek victory at league-leaders Union Omaha before earning a draw at home to postseason contender FC Tucson on Saturday night. 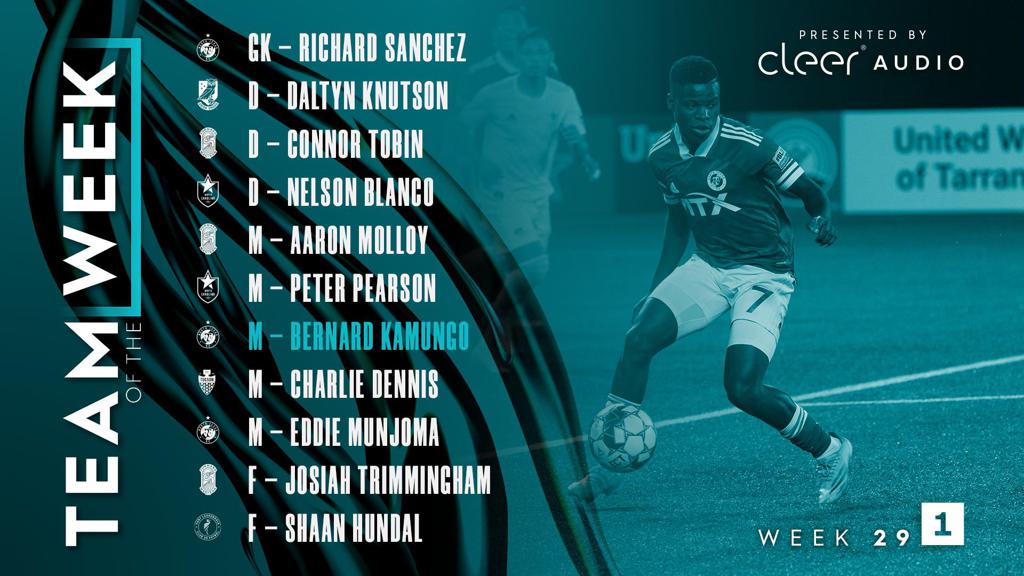 GK – Richard Sanchez, North Texas SC: Sanchez recorded six saves as his side earned a 4-1 victory against the New England Revolution II despite playing for more than an hour down to 10 men on Saturday night.

D – Daltyn Knutson, Union Omaha: Knutson had a solid performance in Omaha’s 2-0 victory against the Richmond Kickers on Saturday night, winning 3 of 4 duels and completing 51 of 56 passes as los Buhos clinched homefield advantage throughout the postseason.

D – Connor Tobin, Forward Madison FC: Tobin led all players with 22 clearances across two games, including a 2-1 road win against Union Omaha on Wednesday, while also recording one assist and completing 69 of 90 passes and winning 7 of 10 duels.

D – Nelson Blanco, North Carolina FC: Blanco had a solid game on the back line, winning 3 of 4 duels and making three interceptions, and also recorded a pair of shots while completing 54 of 71 passes in his side’s 1-0 win against South Georgia.

M – Aaron Molloy, Forward Madison FC: Molloy began Madison’s comeback in a 2-2 draw against FC Tucson on Saturday and was stellar across two games in the center of midfield once again for the Flamingos, completing 119 of 146 passes while making five interceptions and 20 recoveries as Madison took four points in the week.

M – Peter Pearson, North Carolina FC: Pearson scored the decisive goal in NCFC’s 1-0 win against South Georgia Tormenta FC on Saturday night and completed 44 of 50 passes while winning 8 of 9 duels in the center of midfield.

M – Bernard Kamungo, North Texas SC: The Tanzanian recorded two goals after coming on as a halftime substitute to help tilt the game in favor of a 10-man NTSC as it boosted its playoff chances with a 4-1 win against the New England Revolution II.

M – Charlie Dennis, FC Tucson: Dennis recorded one goal and one assist in his side’s 2-2 draw with Forward Madison FC on Saturday night and had three shots and three key passes overall while completing 25 of 39 passes.

M – Eddie Munjoma, North Texas SC: Munjoma recorded a goal and assist for NTSC in its win against New England and completed 33 of 37 passes overall while notching a pair of key passes.

F – Josiah Trimmingham, Forward Madison FC: The Trinidad and Tobago international scored both goals as Madison took a 2-1 victory on the road against Union Omaha on Wednesday night.