USL League One Team of the Week - Week 28

TAMPA, Fla. – USL League One announced on Monday the Team of the Week Presented by Cleer Audio for Week 28 of the 2021 regular season, with Union Omaha forward Evan Conway named Player of the Week after scoring his second hat trick of the season on Saturday night in Omaha’s victory against North Carolina FC.

Conway became the second player to record multiple hat tricks in League One’s history following 2019 Golden Boot winner Ronaldo Damus, formerly of North Texas SC, as los Buhos continued their pursuit of a first-place finish in the league’s regular season. The 23-year-old opened the scoring in just the second minute and struck again inside the opening 20 minutes to restore Omaha’s lead after North Carolina had hit back in the 15th minute. Conway completed his hat trick just before the hour-mark to move to 10 goals this season, tied for fifth in the league.

Omaha’s four-goal outing against NCFC earned a league-high three selections to the Team of the Week, while FC Tucson earned two selections after its key victory on Saturday night. 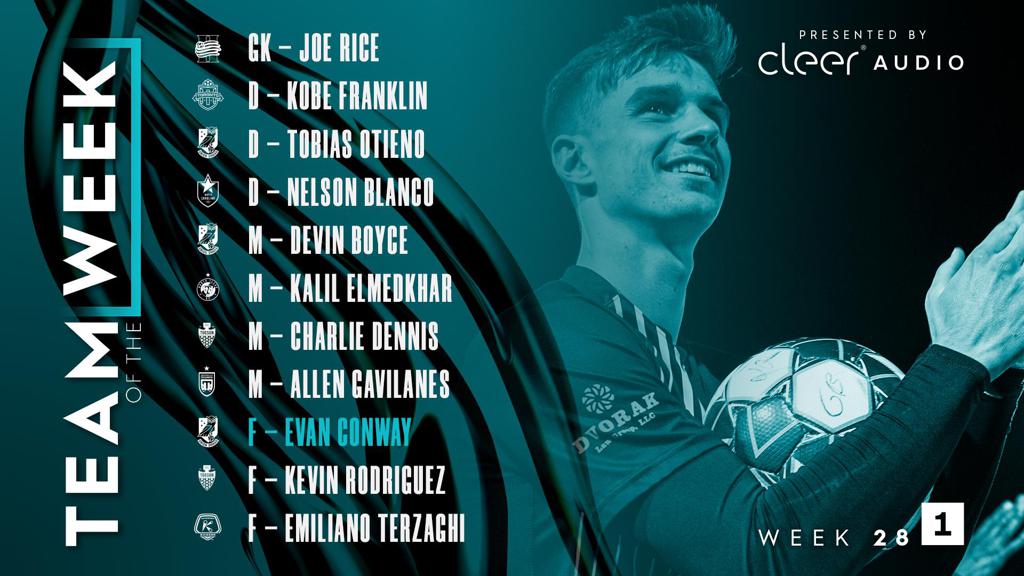 D – Nelson Blanco, North Carolina FC: Blanco had a solid all-around display in NCFC’s 2-0 win on the road against FC Tucson on Wednesday night, recording three interceptions and 10 recoveries while completing 51 of 57 passes.

M – Devin Boyce, Union Omaha: Boyce recorded his eighth assist of the season – one off the league-lead – and had two shots and seven key passes while completing 33 of 44 passes and winning 6 of 9 duels in Omaha’s win on Saturday night against North Carolina.

M – Allen Gavilanes, Greenville Triumph SC: Gavilanes scored his first professional goal to lift Triumph SC to a 1-0 victory on Saturday night against the New England Revolution II and to the verge of a third consecutive postseason berth.

F – Evan Conway, Union Omaha: Conway struck for his second hat trick this season to lead Omaha to victory against North Carolina FC on Saturday night and finished with four shots and two key passes while completing 16 of 20 passes overall.

F – Kevin Rodriguez, FC Tucson: Rodriguez scored the opening two goals for Tucson, including what proved to be the game-winner in the 67th minute, and had three shots and one key pass as well as completing 18 of 20 passes in the side’s victory against South Georgia Tormenta FC.

F – Emiliano Terzaghi, Richmond Kickers: The Argentine standout notched a pair of goals, including the winner in the 88th minute, to not only lead the Kickers to a 3-2 victory against Henny Derby rival Forward  Madison FC but set a new League One single-season scoring record with his 17th goal of the campaign.