USL League One Team of the Week - Week 27

TAMPA, Fla. – USL League One announced on Monday the Team of the Week Presented by Cleer Audio for Week 27 of the 2021 regular season, with South Georgia Tormenta FC forward Azaad Liadi named Player of the Week after scoring the first hat trick in the club’s League One history on Sunday night.

Liadi opened the scoring in a wild 4-4 draw at DRV PNK Stadium in the 18th minute and then drew a penalty inside the opening minute of the second half that was converted by teammate Marco Micaletto to put Tormenta back ahead. After the visitors had gone both down a man and behind to the hosts, Liadi added his second of the night in the 61st minute before 10 minutes later wrapping up his hat trick as his well-timed runs, speed and sharp finishing proved difficult for Fort Lauderdale’s defense to handle all night.

Union Omaha’s big midweek victory against Fort Lauderdale earned a league-high three selections to the Team of the Week, with the Richmond Kickers and Chattanooga Red Wolves SC each earning two selections apiece. 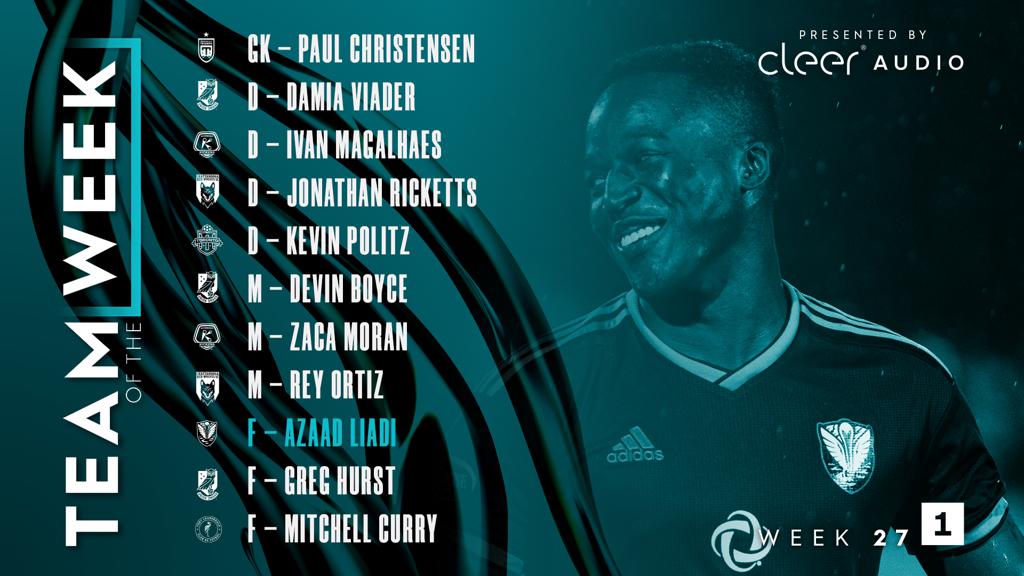 GK – Paul Christensen, Greenville Triumph SC: Christensen recorded a two-save shutout as Greenville became only the second side to defeat Omaha on its home turf on Saturday night in a 1-0 win.

D – Damia Viader, Union Omaha: The Spanish standout had one assist in Omaha’s 4-1 win against Fort Lauderdale on Wednesday night, and over the week recorded six key passes and made 20 recoveries and four interceptions defensively.

D – Ivan Magalhaes, Richmond Kickers: Magalhaes lifted Richmond to its fourth consecutive win with a stoppage-time goal against North Texas on Sunday night and had two solid games defensively with 14 clearances, 14 recoveries while winning 4 of 5 tackles.

D – Jonathan Ricketts, Chattanooga Red Wolves SC: Ricketts found the net with a good diving header to give the Red Wolves their opening goal in a 3-2 win against North Carolina FC and made four interceptions while winning 9 of 16 duels and 6 of 10 aerial duels.

M – Devin Boyce, Union Omaha: Boyce recorded one goal and one assist in Omaha’s midweek win against Fort Lauderdale and over the week had seven key passes while completing 71 of 86 passes overall and recording 13 recoveries.

M – Zaca Moran, Richmond Kickers: The Argentine produced one of the goals of the season to spark Richmond’s comeback victory against North Texas on Sunday night and across two games won 10 of 16 duels and 5 of 6 tackles while making 15 recoveries defensively.

F – Greg Hurst, Union Omaha: Hurst recorded two goals and one assist in los Buhos’ 4-1 victory against Fort Lauderdale on Wednesday night as he put all three of his shots on target and notched two key passes overall.

F – Mitchell Curry, Fort Lauderdale CF: Curry had a stellar individual week with one goal and two assists for Fort Lauderdale against Union Omaha and South Georgia Tormenta FC, and also completed 3 of 4 dribbles and made five recoveries across the two games.