USL League One Team of the Week - Week 24 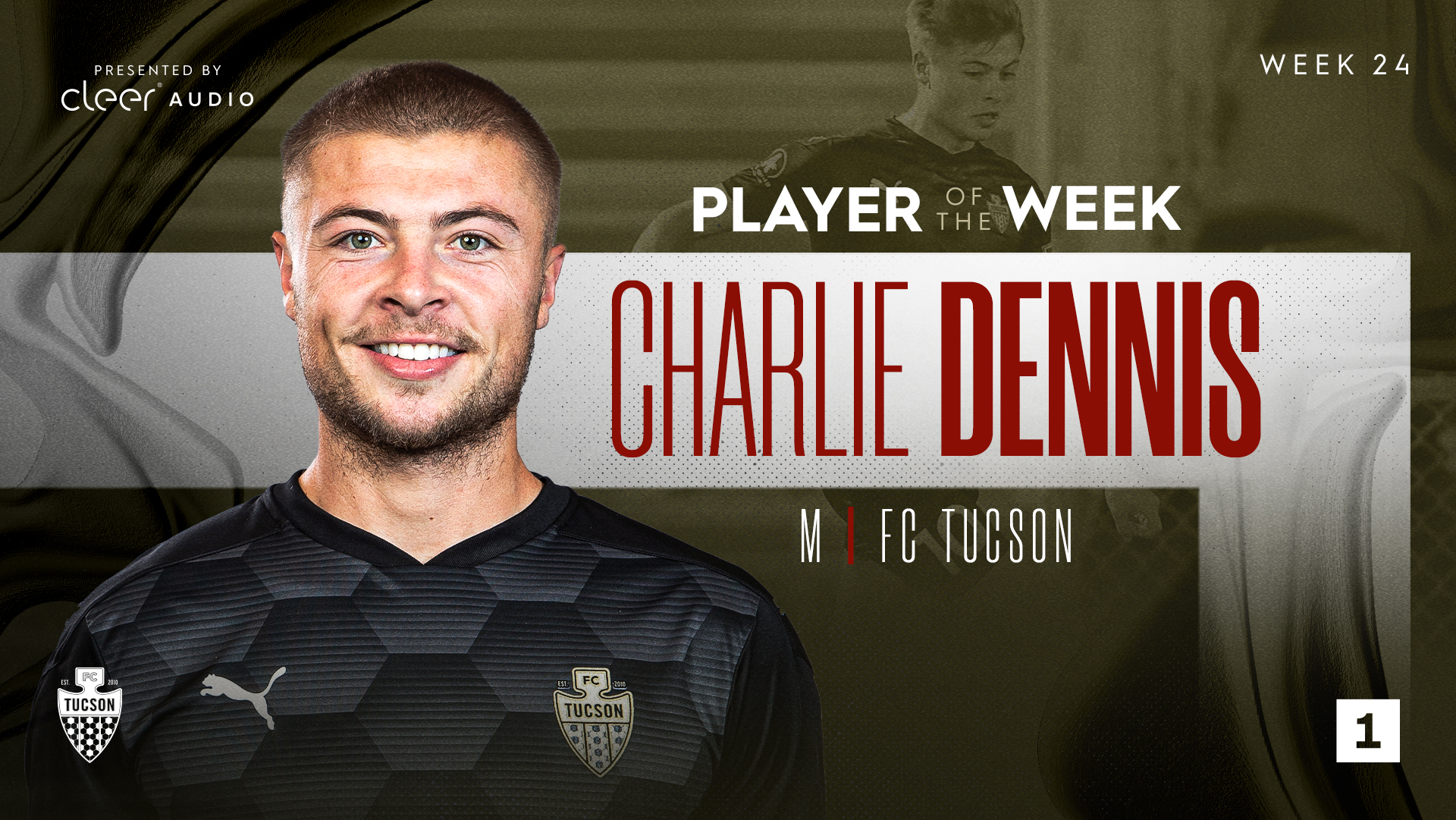 TAMPA, Fla. - USL League One announced on Monday the Team of the Week Presented by Cleer Audio for Week 24 of the 2021 regular season, with FC Tucson midfielder Charlie Dennis named Player of the Week after scoring his first professional hat trick in Tucson’s thrilling 3-3 draw against Greenville Triumph SC on Sunday night at Legacy Early College.

Dennis recorded the game’s first goal in the sixth minute, guiding home a lovely finish with his left foot. After Tucson fell behind, the Brighton, England native equalized from the penalty spot just before halftime. He rounded off his hat trick in the 61st minute with a powerful header which deflected in from a corner kick.

Positive results for Tucson, Chattanooga, and New England see two players from each of the three clubs represented in this week’s Team of the Week. 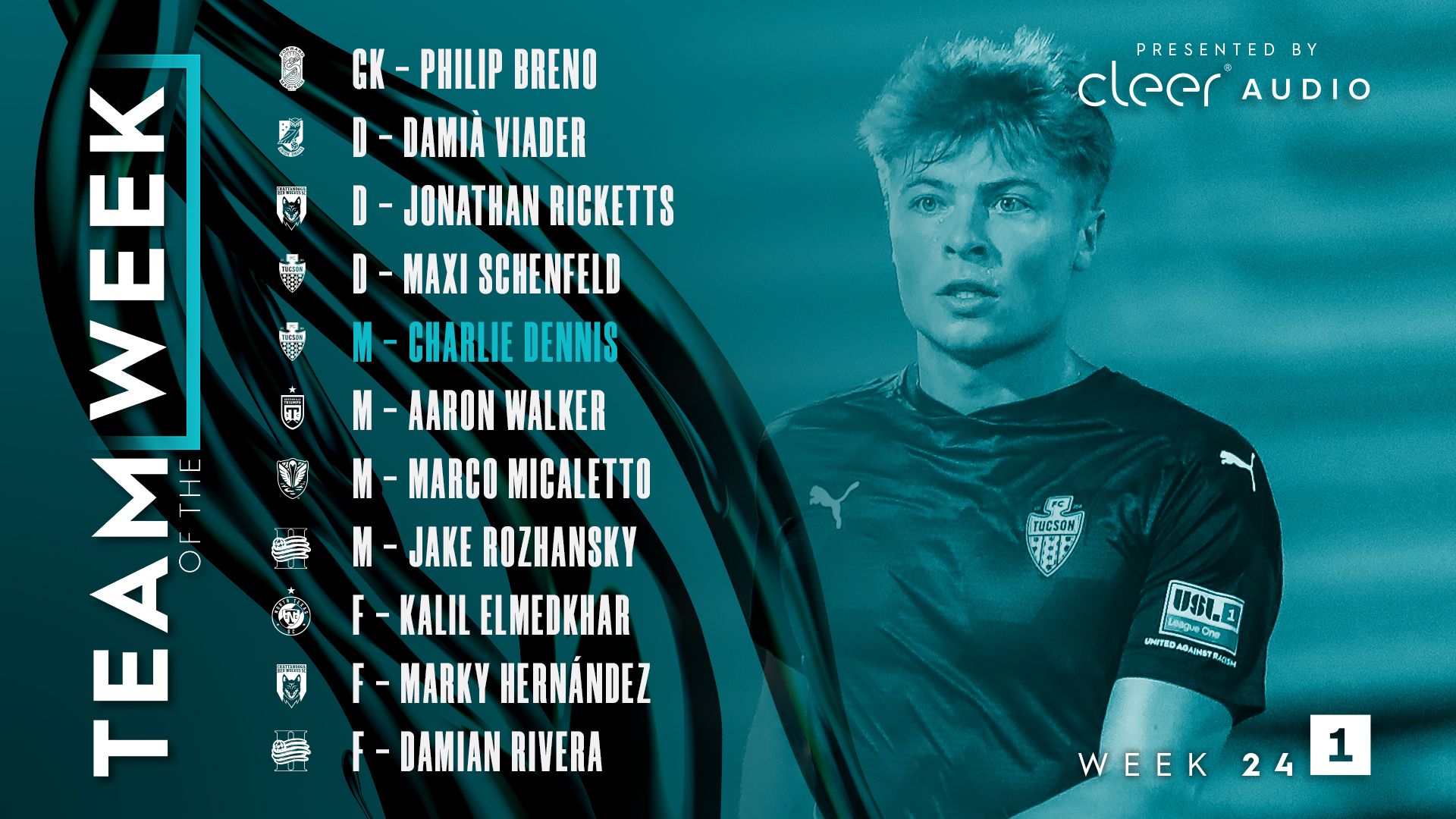 D - Jonathan Ricketts, Chattanooga Red Wolves SC: After Chattanooga’s attack looked stagnant in the first half of its match with North Carolina FC on Saturday, Ricketts sparked the team to life with an excellent finish in the 51st minute, setting the stage for the Red Wolves to push on and earn a 3-1 win.

D - Maxi Schenfeld, FC Tucson: Schenfeld did a little bit of everything along Tucson’s left flank. He led all players in the match in duels won (12), dribbles completed (three), and tackles (two), while also racking up five clearances and 13 recoveries.

M - Charlie Dennis, FC Tucson: Dennis’ hat trick earned his side what could prove to be a massive away point against Greenville, and doubled his goal-scoring tally for the season.

M - Aaron Walker, Greenville Triumph SC: Walker scored twice in the first half in Greenville’s 3-3 draw with Tucson, once from open play and once from the spot. All three of his attempted dribbles were successful on the night, and he completed 91 percent of his passing attempts.

M - Marco Micaletto, South Georgia Tormenta FC: Micaletto was absolutely everywhere for Tormenta in its 2-2 away draw with Fort Lauderdale CF on Sunday. In addition to playing a role in both his team's goals - scoring one and setting up the other - he led all players in the game in multiple key categories, including dribbles completed (three), fouls drawn (four), chances created (four) and duels won (seven).

M - Jake Rozhansky, New England Revolution II: Rozhansky showed why the Revolution II have missed his presence in midfield as of late. In his first appearance since August 14 after missing four games due to injury, the Maryland native recorded his team-high sixth assist of the year, nine recoveries, and four chances created.

F - Kalil ElMedkhar, North Texas SC: ElMedkhar played a role in both of NTSC’s goals in its 2-2 draw with Omaha, scoring one and assisting the other as part of a game-high four chances created in total.

F - Damian Rivera, New England Revolution II: Rivera was a constant nuisance for the Richmond defense as New England cruised to a 3-1 victory on Friday. In addition to registering a goal and an assist, he led all players in the match in dribbles completed (six), chances created (seven) and duels won (14).