The Front Three: What To Watch For In Week 22 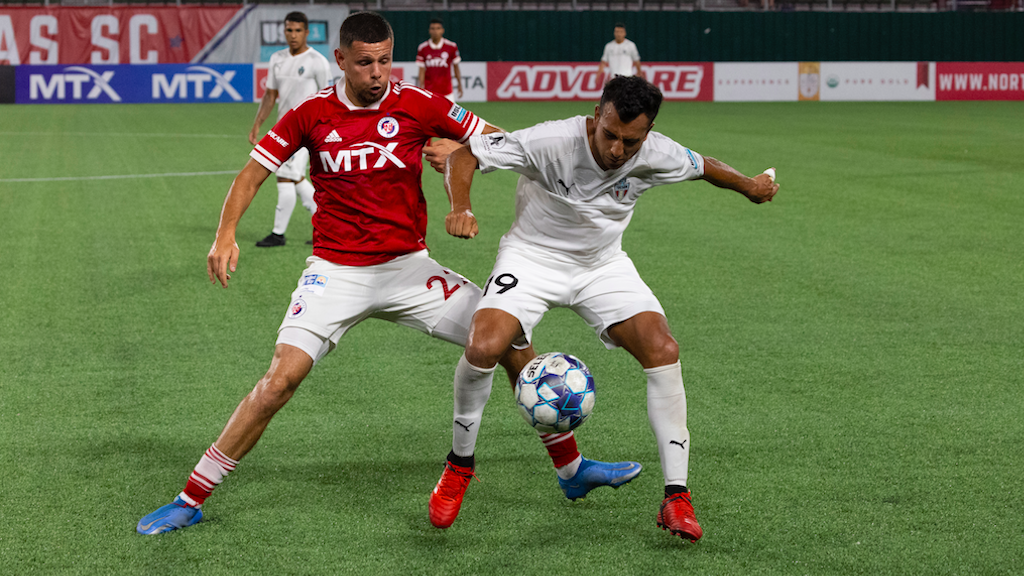 North Texas and Tucson are set to meet for the third time this season on Saturday, and there's a lot on the line / Photo courtesy North Texas SC

It might be hard to believe, but it’s already September - and that means we’ve reached the business end of the 2021 League One regular season. With how tight the table is, every game matters at the moment. Take FC Tucson, whose win over the New England Revolution II on Wednesday night moved them from 11th place up to fourth.

We’re now able to begin doing the math for each team’s postseason chances, and though we never know quite how a week’s results will shake out, we know that for many teams in the crowded midfield pack, the time of playing for draws is over. As more coaches begin to realize that only wins will get them over the coveted playoff line, we should start to see more open games of soccer, and that’s a good thing for us all.

Ahead of five games across three nights this weekend, here are the storylines you should keep an eye on.

Saturday night’s match between North Texas SC and FC Tucson (9 p.m. ET | ESPN+) is a meeting of two of the hottest teams in League One right now. NTSC is riding an eight-game unbeaten streak during which it has conceded only five goals, and Tucson has won three games in a row, scoring eight times in that span.

Tucson’s streak has moved the club from the fringes of the playoff race to the thick of it, as noted above. But it will be put to the test against a strong NTSC side that has two things going for it on Saturday. First, Eric Quill’s team almost never loses at Globe Life Park - in fact, in the 17 home games NTSC has played there between this season and last, it has lost only once.

NTSC has also had the upper hand in the season series with Tucson thus far. The pair played to a scoreless draw in their first meeting before North Texas won 2-0 in Arizona on August 7. But Tucson has looked a changed team since then, and with both clubs on 25 points entering Saturday’s game, this should be a great one for the neutral.

Above the mid-table scrum is a region of the standings which seems as though it offers a bit more clarity. In this year’s new playoff format, the top two teams in the table at the end of the regular season will receive a bye to the League One Semifinals, and Chattanooga Red Wolves SC and Union Omaha have had a stranglehold on those spots for some time now.

Second-place Omaha is currently six points ahead of third-place Fort Lauderdale CF, having played three fewer games than FTLCF. League leaders Chattanooga are eight points clear of the third-place line having played two fewer games. Barring a catastrophic collapse for either, it seems that both the Red Wolves and los Búhos will earn the first round byes come playoff time - but it’s still unclear which will finish top of the pile.

Both clubs are on the road this Saturday to write the latest chapter in what could be a very competitive race for first place down the stretch. Omaha makes its first visit to North Carolina FC (7 p.m. ET | ESPN+), while Chattanooga heads south to face Fort Lauderdale (7:30 p.m. ET | ESPN+). A win for the Red Wolves would see them remain in top spot for another week, while Omaha needs a win plus dropped points by Chattanooga to regain the lead.

The clock is ticking for both Greenville Triumph SC and South Georgia Tormenta FC at the moment, if perhaps for different reasons.

For the Triumph, Friday night’s meeting with Toronto FC II (7 p.m. ET | ESPN+) has a must-win feel about it. Dropped points for Greenville in that game certainly wouldn’t spell the end of their postseason chances, but it would continue a four-game losing streak (and an eight-match winless streak) and accelerate the defending champions’ rapid descent down the standings. Greenville will have eight games remaining after Friday’s matchup - still time to right the ship, but time that’s disappearing quickly.

Tormenta FC doesn’t have the luxury of time, with its 21 games played the most of any team in League One. With seven games remaining, five of which are on the road, points are at an absolute premium for the South Georgia side, beginning with this Sunday’s visit to the New England Revolution II (7 p.m. ET | ESPN+). Given that Tormenta sits among the crowded pack with 24 points, but has the fewest remaining opportunities of any team to pick up points, perfection - or close to it - is pretty much the requirement from here on in.