The Front Three: What To Watch For In Week 15

With only four points separating fourth place from 11th, a six-game weekend promises to shake up the table 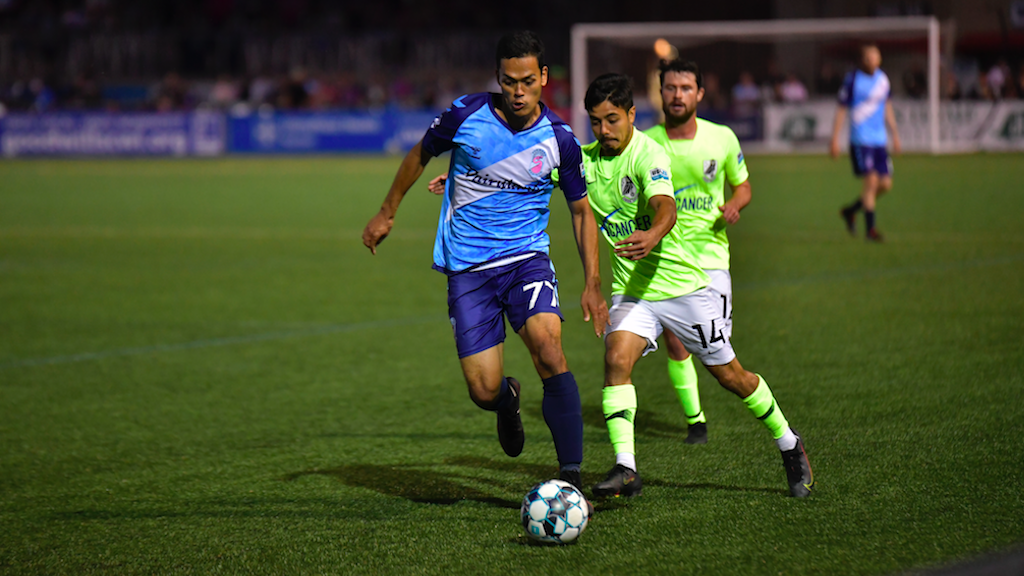 A quick glance at the current League One standings reveals a simple truth - the midtable is an absolute mess. Just four points separate fourth-placed Fort Lauderdale CF from 11th-placed FC Tucson, and those two plus the six teams in between them have all played between 11 and 15 games.

That makes it tough to get a grip on which teams are best poised to grab the fourth, fifth, and sixth playoff spots, but each week gives us a bit more insight as to who could be a contender.

With that being said, here are three storylines in particular to keep your eye on during a busy League One weekend which features all 12 teams in action in six games across Friday, Saturday and Sunday nights.

The weekend’s slate features two matchups in which the teams will be meeting for the third time this season. First, part three of the Battle of the Birbs between Union Omaha and Forward Madison FC takes place at Werner Park on Friday night (9 p.m. ET | ESPN+). Both of the first two games between los Búhos and the Flamingos took place at Madison’s Breese Stevens Field, with FMFC winning the series opener 1-0 on May 26 before Omaha flipped the script and won 2-1 on June 6.

Since then, the two teams have gone in opposite directions. Madison has won just one of its last five games and fallen to eighth place, while Omaha is unbeaten since that loss to the Flamingos in late May and sits top of the table.

On Saturday night, Greenville Triumph SC and South Georgia Tormenta FC will face off for the third time this year, but the first at Greenville’s Legacy Early College (7 p.m. ET | ESPN+). Like their ornithological counterparts, the two teams split a pair of games at Erk Russell Park, with Greenville winning 1-0 on May 22 and Tormenta winning 3-1 on June 19.

Since its four-match win streak concluded with that victory over Triumph SC, Tormenta has cooled off a bit, going winless in four games. Greenville is unbeaten since its loss in South Georgia - but three of its four games have been draws, and the defending title-winners will be eager to get back to winning ways on a consistent basis.

Revenge on the Cards

Throughout its League One history, North Texas SC has made the Lone Star State its fortress. During the 2019 and 2020 seasons, NTSC lost only one game in the state of Texas, to Greenville back on July 26, 2019. Its unbeaten streak at home would be on the verge of reaching two full years if not for Chattanooga Red Wolves SC, who became only the second League One team to beat North Texas away on May 8 of this year.

Those same two sides will meet again at Globe Life Park this Saturday night (9 p.m. ET | ESPN+), and North Texas is sure to be determined not to allow a repeat of its defeat at the hands of Chattanooga earlier this season. In addition to the intrigue that provides, the Red Wolves and North Texas rank first and third in League One with 19 and 17 goals scored respectively - a result of the expansive, attacking styles of soccer they look to play. This one has the ingredients to be a goal-fest, and should be really entertaining.

FC Tucson and North Carolina FC may sit second-from-bottom and bottom of the table at the moment, but each club has shown improvement recently, and each has an opportunity at home this weekend to continue moving in the right direction.

Tucson welcomes the New England Revolution II to Kino North Stadium on Saturday night (10 p.m. ET | ESPN+) coming off a win and a draw in interim Head Coach Jon Pearlman’s first two games in charge. The victory came at home against Fort Lauderdale CF, and the draw was an impressive one as the team rallied from a late two-goal deficit away against Chattanooga.

On the other side of the country, North Carolina will host Toronto FC II on Sunday at WakeMed Soccer Park (6 p.m. ET | ESPN+). After taking only one point from its opening seven games, NCFC’s young squad is showing signs of progression. Head Coach John Bradford’s team is unbeaten in its last three matches, and kept noteworthy clean sheets away against Tormenta and Greenville in its last two.

There's still plenty of season left for both Tucson and NCFC, but the time to string together a run of results is now.