USL League One Team of the Week - Week 11 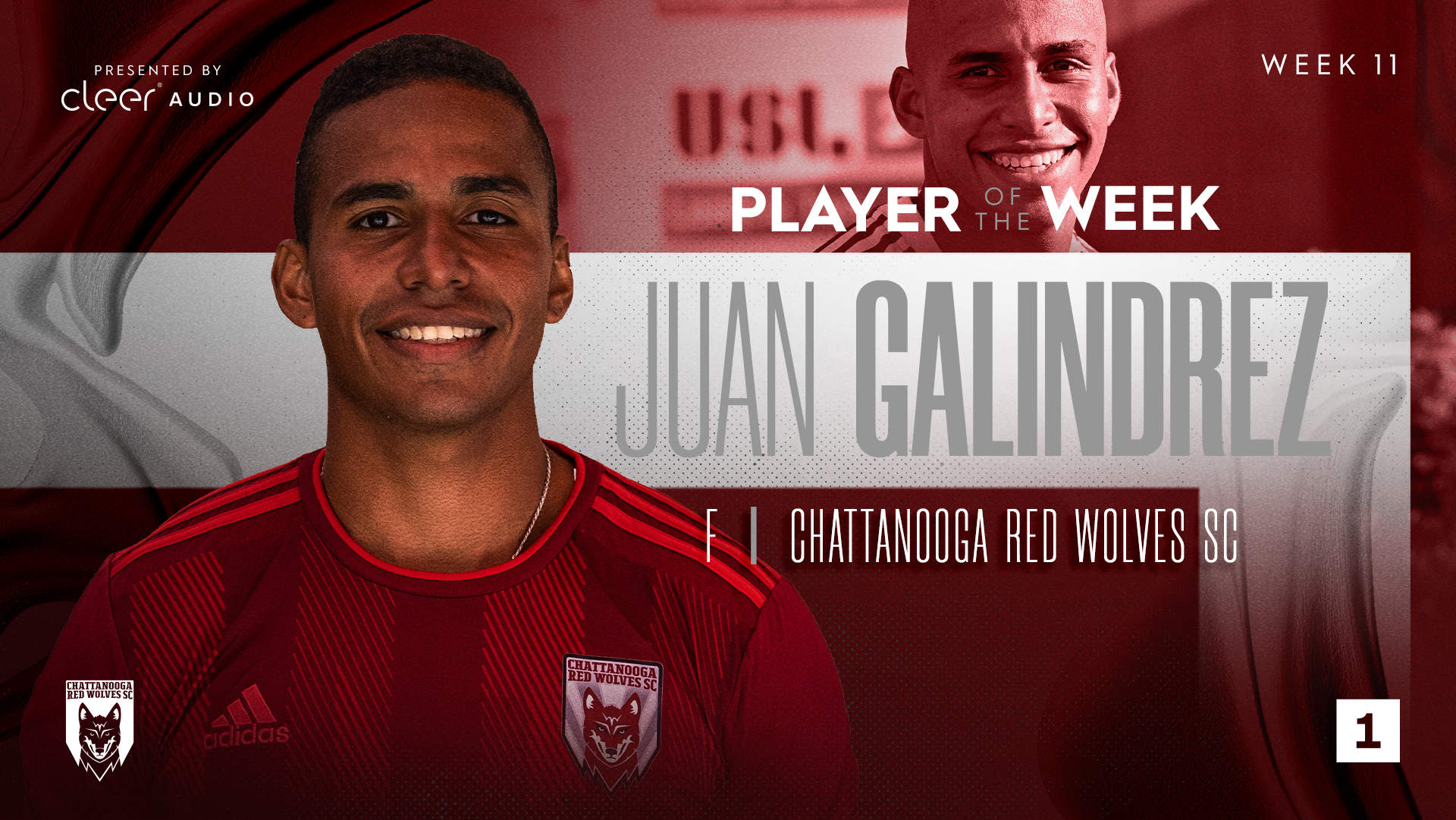 TAMPA, Fla. - USL League One announced on Monday the Team of the Week Presented by Cleer Audio for Week 11 of the 2021 regular season, with Chattanooga Red Wolves SC forward Juan Galindrez named Player of the Week after scoring two late goals off the bench in his side’s dramatic 3-2 win against North Carolina FC on Sunday.

Entering in the 51st minute with his team trailing 1-0, the introduction of Galindrez completely changed the game for Chattanooga. The Colombian forward was a constant threat throughout his time on the pitch, hitting the woodwork once and nearly scoring with an inventive bicycle kick attempt. He eventually got the equalizer with a clever chipped shot in the 73rd minute, then popped up again in the 88th minute to give Chattanooga the lead.

The two goals were his third and fourth of the season as a substitute, all of which have come in the 73rd minute or later.

South Georgia Tormenta FC’s 3-1 win over Greenville Triumph SC sees three of its players represented in Week 11’s Team of the Week, leading all clubs for the second consecutive week. 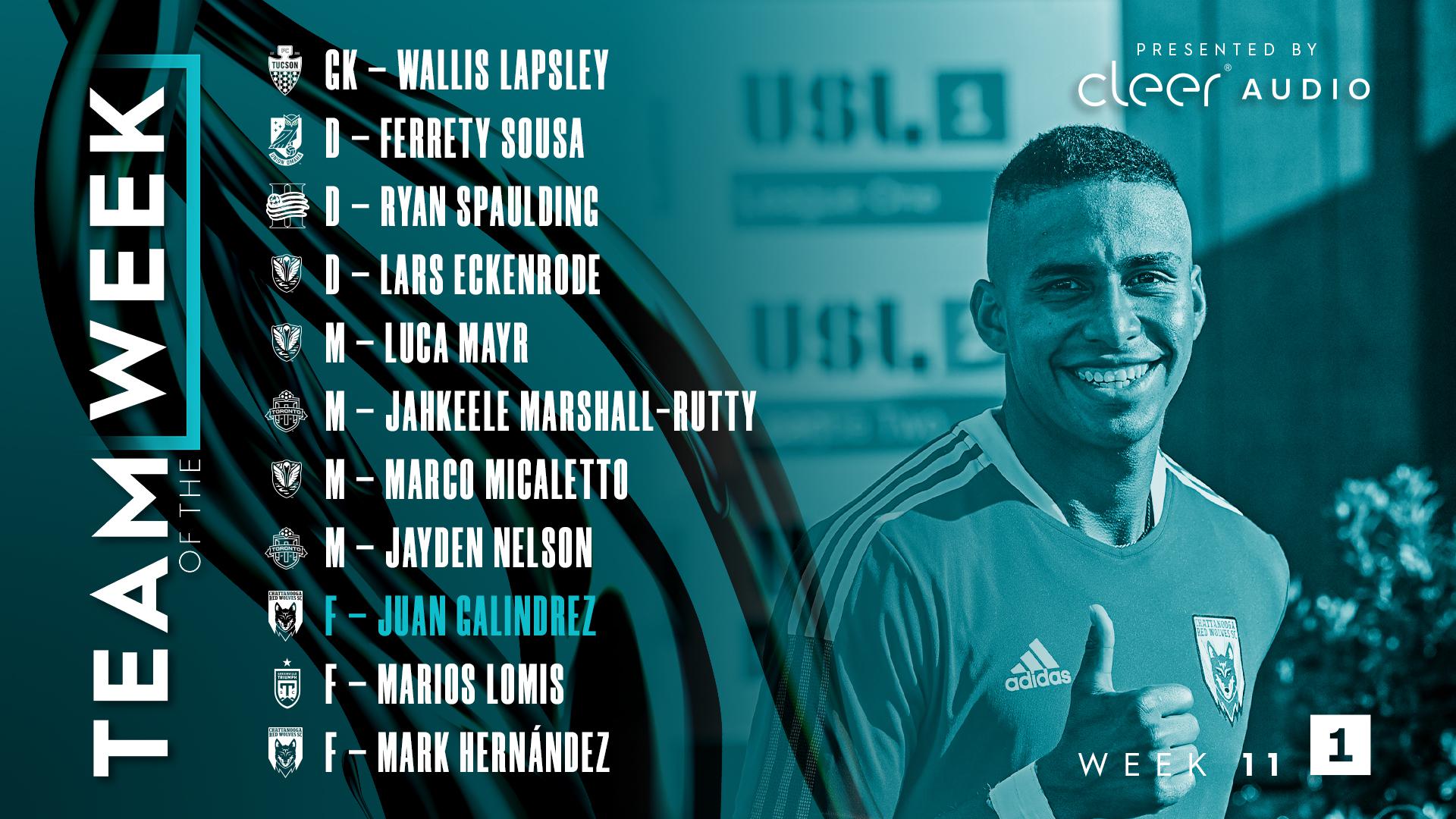 GK - Wallis Lapsley, FC Tucson: Lapsley kept a five-save shutout on the road against North Texas SC. His penalty kick stop just before halftime proved vital to preserving an away point for Tucson.

D - Ferrety Sousa, Union Omaha: Sousa scored Omaha’s only goal of its 1-1 draw away to the Richmond Kickers. The right back also passed at an 85 percent success rate, won four duels and completed four dribbles.

D - Ryan Spaulding, New England Revolution II: Spaulding did a little bit of everything to help New England earn a shutout win away to Forward Madison on Saturday. The fullback made six recoveries, won five duels, and made four clearances to go with two successful tackles.

M - Jahkeele Marshall-Rutty, Toronto FC II: Marshall-Rutty was superb in TFC II’s 2-1 win against Fort Lauderdale on Sunday. He scored one goal himself and assisted another as the Young Reds overturned an early deficit, and passed at a 90 percent success rate.

M - Marco Micaletto, South Georgia Tormenta FC: Micaletto put the icing on Tormenta’s victory against Greenville by scoring a penalty kick, which he won himself following a fantastic bit of skill. He led all players in the match in both duels won (nine) and fouls drawn (seven).

F - Juan Galindrez, Chattanooga Red Wolves SC: Galindrez continues to lay claim to the “Super Sub” moniker. All four of his goals this season have come in substitute appearances, all four have been in the 73rd minute or later, and all four have helped earn Red Wolves SC a win.

F - Marios Lomis, Greenville Triumph SC: Lomis’ scorching run in front of goal is showing no signs of stopping. Greenville beat North Carolina FC 2-1 last Wednesday behind a goal and an assist from the Dutchman, and he recorded Triumph SC’s lone goal in its loss to Tormenta as well.

F - Mark Hernández, Chattanooga Red Wolves SC: Like his teammate Galindrez, Hernández made a massive impact as a second-half substitute in Chattanooga’s comeback win over North Carolina. He assisted Galindrez for the equalizer, then scored what would prove to be the game-winner in stoppage time.