USL League One Team of the Week - Week 9 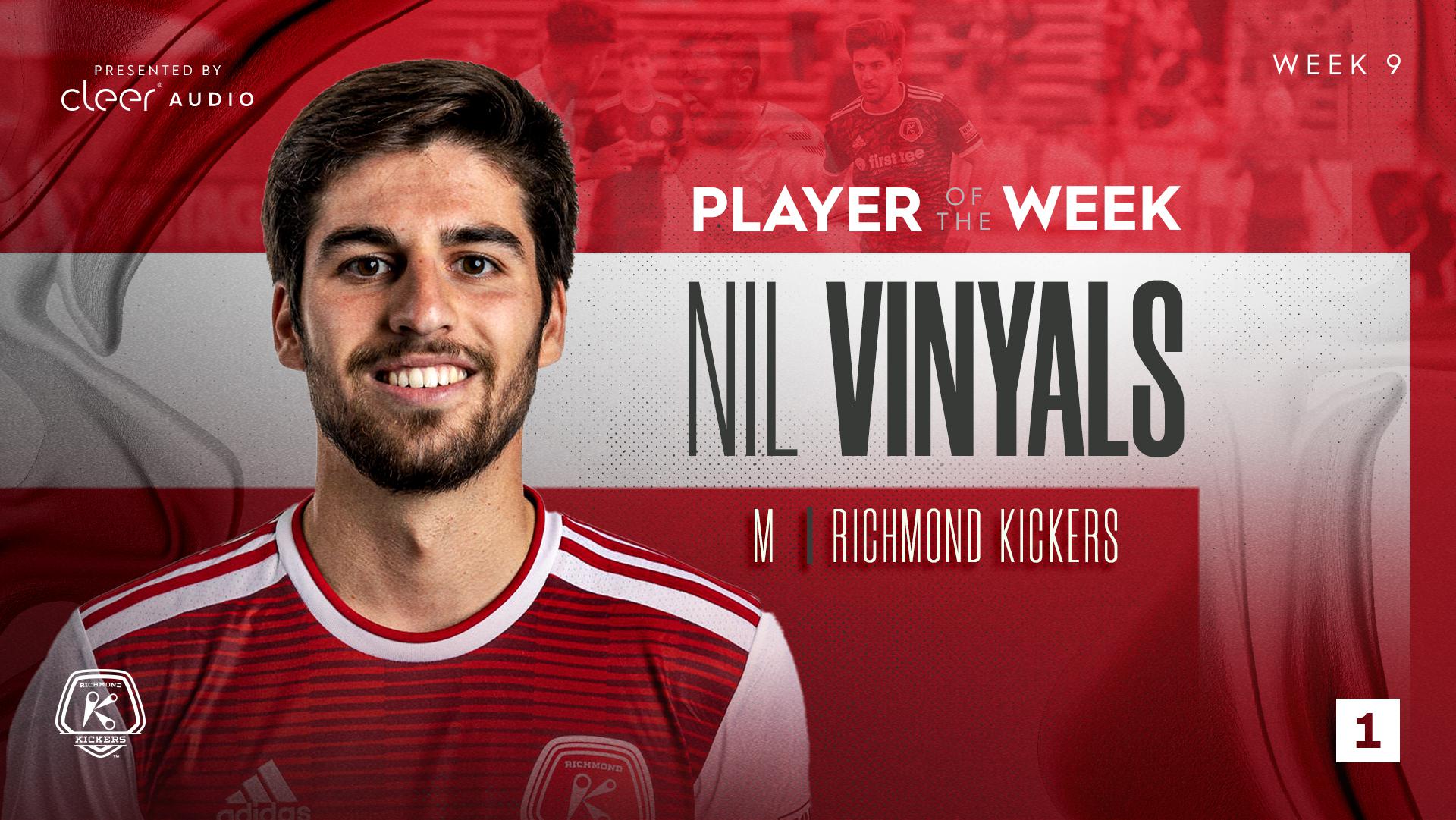 TAMPA, Fla. - USL League One announced on Monday the Team of the Week Presented by Cleer Audio for Week 9 of the 2021 regular season, with Richmond Kickers midfielder Nil Vinyals named Player of the Week after recording two assists in Richmond’s 3-2 win over the New England Revolution II on Saturday.

The Spaniard played a key role in all three Kickers’ goals on the night. His tremendous turn and outside-of-the-boot through ball played in Jonathan Bolanos, who then found Matt Bolduc for Richmond’s first goal just 25 seconds into the game. Vinyals then picked up the assists for both his pinpoint corner kick delivery to Juan Pablo Monticelli, and slicing his way through the New England defense to set up Emiliano Terzaghi for a simple finish.

Fort Lauderdale CF’s 2-2 draw with Forward Madison FC and 2-1 away win against North Carolina FC sees the Florida club lead all teams with three players represented in this week’s team. 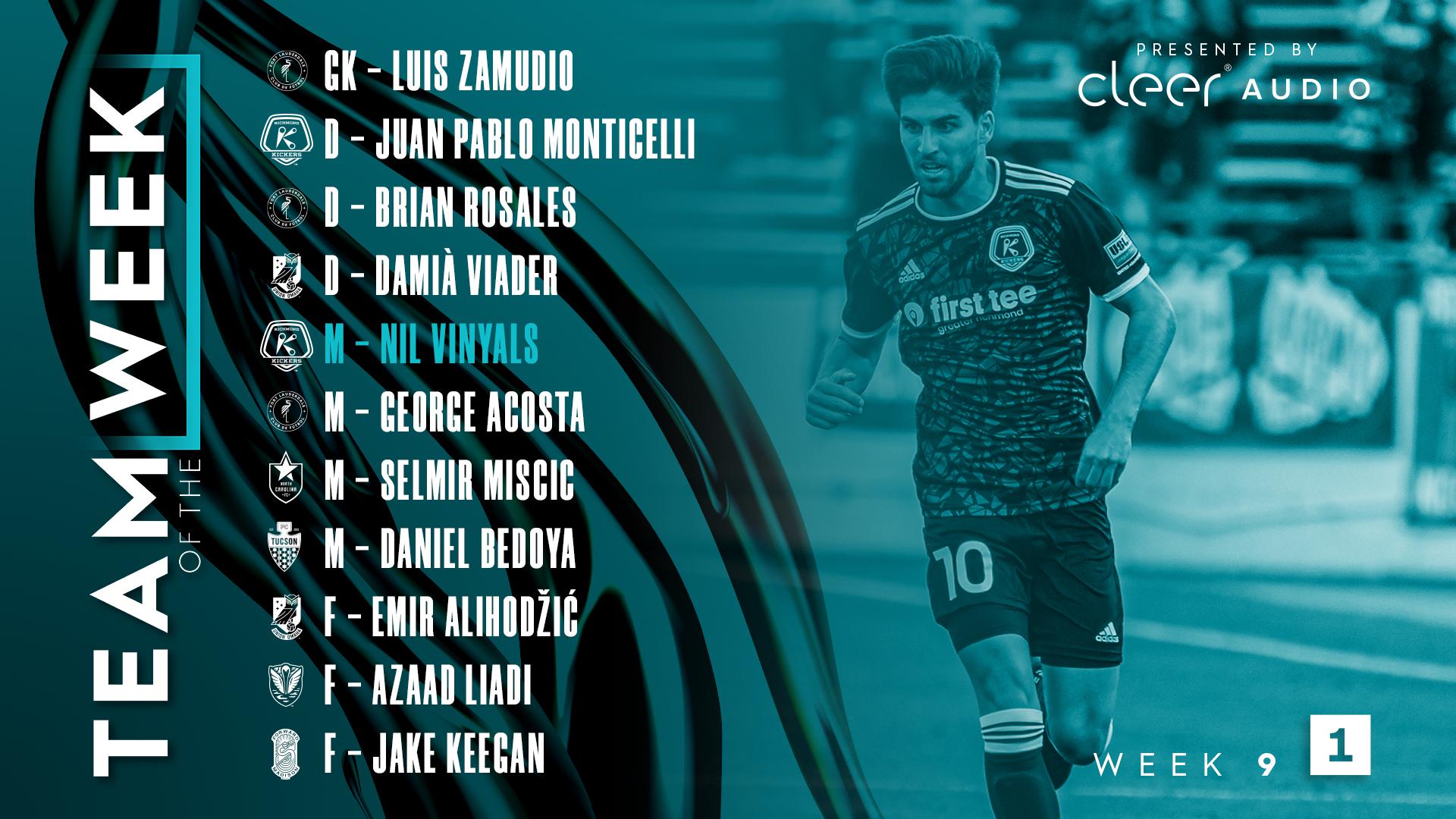 GK - Luis Zamudio, Fort Lauderdale CF: Zamudio’s performance in Fort Lauderdale’s win against North Carolina was nothing short of spectacular. The young goalkeeper made eight saves to help his side sustain waves of pressure from their opposition.

D - Juan Pablo Monticelli, Richmond Kickers: For the second time this season, Monticelli scored Richmond’s second goal in a game against New England from a corner kick just before halftime. He also made six interceptions and five recoveries.

M - Selmir Miscic, North Carolina FC: Even in defeat, Miscic continued his brilliant run of form for NCFC. The precocious talent scored his third goal in five games, and created six chances while passing at an 85 percent accuracy rate.

M - Daniel Bedoya, FC Tucson: Bedoya’s excellent delivery assisted Giovanni Calixtro for Tucson’s equalizer against Toronto FC II. He was unlucky not to score a stoppage time winner himself when he hit the woodwork in spectacular fashion from distance, and created four chances in total on the night.

F - Emir Alihodzic, Union Omaha: Alihodzic was involved in both Omaha goals in the team’s win over Madison, even if only one went to his name on the scoresheet. The Bosnian forward headed in the winner, and his presence played a role in the deflection which resulted in a Madison own goal to give Omaha the lead in the first half.

F - Azaad Liadi, South Georgia Tormenta FC: On a stormy night in Statesboro where both sides struggled to create chances, Liadi’s instincts helped Tormenta break its losing streak with a 1-0 win against Chattanooga. The striker reacted quickest to a rebound in the box, and poked it home for the game’s only goal.

F - Jake Keegan, Forward Madison FC: Keegan scored in both of Madison’s matches this week to bring his tally this season up to four, second only to Greenville’s Marios Lomis in the Golden Boot race.